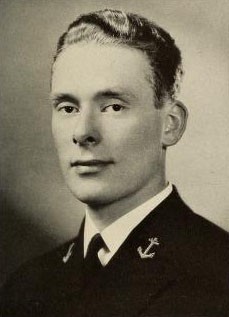 Admiral Colbert was born February 12, 1915 in Brownsville, Pennsylvania. Upon graduation from the US Naval Academy in June 1937, Admiral Colbert was ordered to duty in the USS Yorktown (CV-13) in the rank of Ensign and served in her commissioning until July 1939 when he was assigned to the USS Barker (DD-213), in the US Asiatic Fleet. In 1942, Barker joined the Atlantic Fleet, and as a Lieutenant Commander, Admiral Colbert became her Commanding Officer.

In September 1944 Lieutenant Commander Colbert Reported as Commanding Officer of USS Meade (DD-602), then in the Pacific Fleet, and remained in that command until the end of World War II when he was promoted to the rank of Commander and assigned to the Bureau of Naval Personnel. For the next two and one half years he served as Personnel Planning Officer in connection with the establishment of the Post War Naval Reserve Program.

In June 1948, he was ordered to London, England where he was assigned as Aide and Flag Secretary to Admiral R.L. Connolly, USN, Cincnelm. Two and one half years later, at the completion of this tour, Commander Colbert was married to the former Prudence Ann Robertson of London, England in ceremonies at St. Pauls, Knightsbridge.

On December 19, 1950, Commander Colbert reported for duty in the Officer of the Chief of Naval Operations where he was assigned to OP 35, the Politico-Military Affairs Division. During this assignment he accompanied Admiral Forrest Sherman, USN, CNO as his special on a visit to Spain to initiate negotiations for US Base Rights. Commander Colbert was with Admiral Sherman when he tragically died in Naples, Italy in August 1951.

Upon completion of this tour in Washington, Commander Colbert reported to the USS Albany (CA-123) as Executive Officer. After two years in this assignment, during which Albany was Flagship of Combatcrulant, Commander Colbert was ordered to the Naval War College, Newport, Rhode Island, as a student in the Naval War College. In October 1955 he was promoted to the rank of Captain. Just prior to completion of his course, in the late spring of 1956, Captain Colbert was assigned to organize and act as director of a new course for Senior Free World Naval Officers. This course was established by Admiral Arleigh Burke, USN, CNO, in August 1956 and included student representation from up to 30 allied and friendly countries.

After two years in this assignment at the Naval War College, Captain Colbert was ordered to the Joint Staff Chiefs of Staff in Washington, DC. He was assigned to the Long Range Plans and Basic War Plans Branches in the Plans and Policy Directorate during this tour.

On February 7, he was relived as Commanding Officer of Boston and shortly thereafter, reported to duty in the Washington, DC area. Assigned as a Member of the Policy Planning Council in the Department of State, he was serving there when promoted to Rear Admiral. In June 1965 he assumed command of Cruiser Destroyer Flotilla Six and in June 1966 became Deputy Chief of Staff and Assistant Chief of Staff for Policy, Plans and Operations to the Supreme Allied Commander, Atlantic. “For exceptionally meritorious service….” In that capacity, he was awarded the Legion of Merit. On August 30, 1968, in the rank of Vice Admiral, he reported as president of the Naval War College, Newport, Rhode Island.

In September 1971 he became Chief of Staff to the Supreme Allied Commander, Atlantic, with headquarters in Norfolk, Virginia and in June 1972, in the rank of Admiral, reported as Commander in Chief Allied Forces, Southern Europe. He was awarded a Gold Star in lieu of the Second Distinguished Service Medal “for exceptionally meritorious service… during the period June 1972 to November 1973…” The citation further states in part:

“…Responsible for the defense of the Southern Region of Allied Command Europe, Admiral Colbert, in accomplishing this task, directed the activities of five principal varied and separated subordinate commands. His brilliant integration of these commands into a battle-ready team has lent credibility to the NATO strategy of flexible response and has engendered and enthusiastic spirit of solidarity among the five Southern Region NATO nations involved…”

He was transferred to the retired List of the US Navy on November 25, 1973 and on December 2, that year died at the Naval Hospital, Bethesda, Maryland.