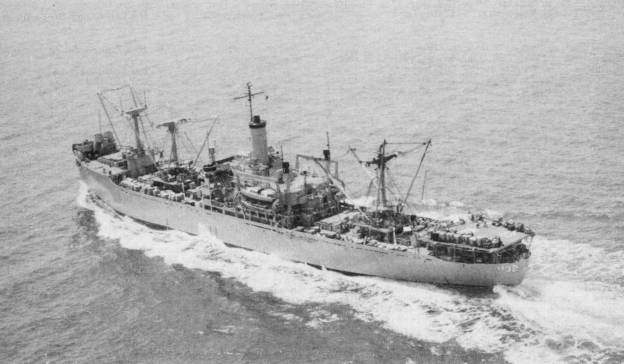 Caption: Altair (AKS-32) underway during 1966; from the appearance of her decks and helicopter landing pad, aft, she is ready to commence an underway replenishment. Her "Victory Ship" lines are readily apparent in this aerial oblique view. (NH 96650)

A first magnitude star in the constellation Aquila, in the northern Milky Way.

Aberdeen Victory was laid down under a Maritime Commission contract (MC Hull 110) on 20 April 1944, at Portland, Oreg., by the Oregon Shipbuilding Corp.; launched on 30 May 1944; sponsored by Mrs. A. L. M. Wiggins; completed on 22 June 1944; and entered merchant service under contract with the Waterman Steamship Co., under whose flag she supported operations against Japan and took part in the conquest of Okinawa during May 1945. Following the end of the war, the freighter was assigned to the National Defense Reserve Fleet (NDRF) and laid up in the Suisun Bay, Calif., berthing area.

Transferred to the Navy on 7 July 1951, a little over a year after communist forces invaded the Republic of Korea, the ship was renamed Altair on 26 July; classified as a cargo ship and classified AK-257; and commissioned at Baltimore, Md., on 31 January 1952, Comdr. George J. Largess in command.

Assigned to the Atlantic Fleet Service Force, Altair was initially based at Norfolk, Va., and visited Annapolis (29–31 March) and Guantánamo Bay, Cuba (26 May–2 June), during the course of her shakedown. Soon thereafter, she commenced her first deployment to the Mediterranean to support the Sixth Fleet, arriving at Gibraltar on 29 June 1952. Altair departed that port the following day, and sailed to Golfe Juan, France, arriving there on 2 July. She remained there until the 12th, when she set out for Naples, Italy; she steamed thence to Casablanca, French Morocco.

Altair cleared Casablanca for the east coast of the United States on 26 July 1952, and reached Norfolk on 4 August. Anticipating conversion to a stores issue ship, the vessel was reclassifed AKS-32 on 12 August 1952. Altair was decommissioned at Norfolk Naval Shipyard on 5 January 1953, and taken in tow to Baltimore, where she underwent conversion at the Maryland Drydock Co., to prepare her for her new role.

Recommissioned at Norfolk on 15 December 1953, the ship rejoined the Atlantic Fleet and, following her shakedown, reported for duty on 20 March 1954. A little over two months later, on 24 May, Altair sailed for the Mediterranean, and reached the Hyeres Islands, off the southeast coast of France, on 10 June, for a week's stay. She steamed thence to Naples and Cagliari, Italy, and thence to Golfe Juan, before paying a return call at Naples. She then visited Palma de Majorca before reaching Gibraltar on 11 August en route back to the United States. During her second Mediterranean deployment, the ship also conducted two underway replenishments, with Task Force (TF) 63 (29 June–2 July), and on 2 August 1954. Arriving back at Norfolk on 23 August, Altair operated between that port and New York and Baltimore through the autumn, ultimately sailing from Norfolk on 15 November for Gibraltar and her third deployment with the Sixth Fleet. Over the next few months, Altair called at Gibraltar, Naples (thrice); Barcelona, Spain; Genoa, Italy; Cartagena, Spain; Mers-el-Kebir and Algiers, Algeria, before she closed out that deployment at Gibraltar on 24 February 1955, and turned for Norfolk.

In May 1955, her home port shifted to Barcelona, and she cleared Norfolk for her permanent station in the Mediterranean on 26 May 1955, bound for Gibraltar. In August 1962, her home port became Naples. From time to time she returned to the United States for overhaul and modification. In 1959, the ship received a helicopter landing platform to enable her to carry out early vertical replenishment operations. She also received a complete material handling system which included new elevators, fork lifts, trucks, conveyor belts, and an electronic accounting system. This greatly facilitated her task of keeping track of the more than 25,000 items on her general stores inventory.

Altair's helicopter rescued an Air Force fighter pilot on 8 September 1961, after he bailed out off the Spanish coast. On 17 March 1962, Altair sent a rescue and assistance detail to aid distressed Italian passenger ship Venezuela off Cannes. While a damage control party operated portable pumps to contain flooding, Altair's corpsmen helped over 800 passengers to leave the liner. A few weeks later, she provided emergency medical assistance to a critically ill Greek national on the island of Koso in the southern Aegean Sea; her helicopter flew the patient to Athens for further treatment. On 17 August 1962, the ship took part in relief operations for homeless repatriates in Algeria by taking 1,000 tents to Bône.

Altair returned to the United States in October 1962, for overhaul but orders abruptly directed her to the Caribbean to replensih American warships enforcing the quarantine of Cuba. After the Cuban Missile Crisis subsided she proceeded to Boston, Mass., for an overhaul which lasted into the spring of 1963. The stores issuing ship departed Norfolk on 18 May and reached Rota, Spain, on the 30th. On 13 June, she assisted in the rescue of an Italian man who had fallen from the seawall while fishing at Naples.

In June 1965, Altair's home port was changed to Norfolk; and she operated from that base until reporting to the Inactive Ship Maintenance Facility to Portsmouth, Va., on 31 December 1968. She was decommissioned on 2 May 1969 and transferred to the Maritime Administration on 1 May 1973.

Her name was stricken from the Naval Vessel Register on 1 June 1973, and the former stores issue ship was laid up in the James River berthing area of the NDRF. She was transferred permanently to the Maritime Administration on 1 September 1971; and, on 31 January 1975, sold for scrapping to Luria Brothers & Co.