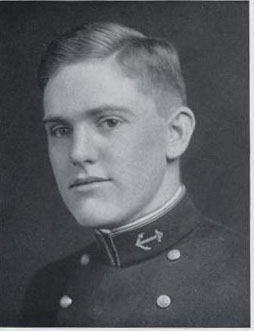 Edward Noe Blakely was born in Philadelphia, Pennyslvania, on 17 May 1912, son of Dillwyn Parrish and Florence Noe Blakely. He attended Norristown High School and Severn Preparatory School before his appointment to the US Naval Academy, Annapolis, Maryland, from the Third Pennsylvania District, in 1930. Entering as a Midshipman on 30 June, that year, he was graduated and commissioned Ensign, USN, on 31 May 1934, and subsequently advanced to the rank of Commander, to date from 1 February 1944.

After graduation from the Naval Academy, he served from 30 June 1934, until 8 June 1936, as a junior officer on board the USS Marblehead. He next had communications duty on the Staff of the Commander in Chief, US Fleet, after which he was a student at the Submarine Base, New London, Connecticut, from 29 June 1937, until 3 December of that year. On 16 January, 1938 he joined the USS S-28, for duty, and served on board that submarine based at Pearl Harbor, until 9 December 1941, immediately after the Japanese attack on the Fleet there on 7 December.

Reporting on board the USS Tuna, he served in various capacities while that submarine operated in the Pacific Combat Area until July 1943. He was awarded the Silver Star Medal "For conspicuous gallantry and intrepidity as Officer of the Ship's Company while serving on board the USS Tuna during that vessel's First War patrol in restricted waters of the Pacific..." The citation states that he "constantly aided the ship's commanding officer in conducting an effective patrol despite treacherous weather and powerful air and surface anti-submainre opposition...(and) rendered vital assistance in maintaining the maximum combat efficiency of ship and crew..."

Returning to the United States, he commissioned the USS Shark on 14 February 1944, and as her Commanding Officer returned to the Pacific. He was awarded the Navy Cross "For extraordinary heroism...during the First War Patrol of that vessel in enemy Japanese-controlled waters from May 16 to June 17, 1944..." with citation which further states:

"Courageous in the face of grave danger, Commander (then Lieutenant Commander) Blakely commanded the Shark in penetrating powerful enemy escort screens and in delivering three smashing torpedo attacks against Japanese shipping. By his brilliant planning and execution of these attacks, he contributed materially to the success of his ship in sinking four enemy ships, totaling 32,300 tons, and in damaging one 5,600 ton freighter. Skillfully evading violent depth charge explosions, bombing attacks and other enemy countermeasures, he succeeded in bringing his vessel safe to port..."

He also received Letters of Commendation from the Commander in Chief, Pacific Fleet, and Commander Submarines, Pacific, as follows:

(1) "For distinguishing himself by meritorious conduct in action...as Commanding Officer of a submarine during a War Patrol. He launched a well-planned and smartly executed attack which resulted in damage to 4,300 tons of shipping. His conduct throughout was an inspiration to his officers and men..."

(2) "On war patrol conducted by a submarine, that vessel is credited with having attacked and sunk enemy shipping of about 6,000 tons; and damaged enemy ships of undetermined character of about 2,000 tons. All attacks were ably consummated. Morale on this ship was high."

Commander Blakely was officially determined to be Missing in Action as of 7 November 1944, having been serving as Commanding Officer of the USS Shark when that submarine failed to return from a war patrol in the China Sea. In compliance with Section 5 of Pulbic Law 490, as amended, death is presumed to have occurred on the 8th day of November 1945 (a year and a day later).

In addition to the Navy Cross, Silver Star Medal and Commendation Ribbon, Commander Blakely was posthumously awarded the Purple Heart Medal. He was also entitled to the American Defense Service Medal, Fleet Clasp; the Asiatic-Pacific Campaign Medal; and the World WarII Victory Medal.

He was survived by his wife, the former Virginia Janet Sampson of Glendale, California.