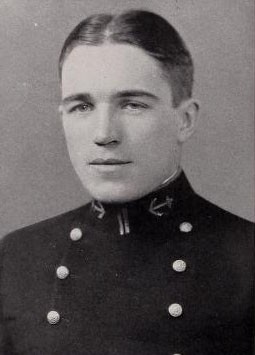 Harry Nelson Coffin was born in Portland, Maine, on April 9, 1906, son of the late Edward B. and Cora Ripley Coffin. He attended Deering High School in Portland, and entered the US Naval Academy as a Midshipman from Maine on July 2, 1925. Graduating with the degree of Bachelor of Science, he was commissioned Ensign in the US Navy on June 6, 1929, and through subsequent promotions attained the rank of Captain, to date from March 30, 1945.

After graduation from the Naval Academy in June 1929, he was under instruction briefly at the Ford Instrument Company, Long Island City, New York, and in September 1929 joined the USS Florida. He served as a junior Watch and Division Officer in the Engineering and Gunnery Department of that battleship unit of the Scouting Fleet, until October 1930. In November of that year he was transferred to similar duty in the battleship Pennsylvania, also operating with Battleship Division 2, Scouting Fleet.

From June 1933 to April 1935 he served in destroyers, first as Assistant Engineer and Torpedo Officer of the USS Tarbell, later as Gunnery Officer, Communications Officer, and First Lieutenant of the USS Barry. He then joined the USS Melville, in which he had duty for a year as Watch and Division Officer, while that vessel was tender for Destroyer Division 2, Battle Force. He returned to Annapolis in July 1936 and during the next year completed the course in General Line at the Postgraduate School.

Reporting to the Navy Department, Washington, DC, in July 1937, he had a year’s instruction at the Hydrographic Office, after which he served successively from September 1938 until July 1939 as Astronomical Officer of the USS Hannibal (AG-1) and USS Bushnell (AS-2). He  was Engineering Watch and Division Officer, and later Senior Assistant Engineer of the USS Lexington (CV 2), a unit of Carrier Division One, Battle Fleet, during the period prior to and following the United States entry into World War II, and participated in air action off Bougainville, the Salamaua-Lae raid, and in the Battle of the Coral Sea. He received a Letter of Commendation, with Ribbon and Combat “V,” as follows:

“For distinguished service and devotion to duty as Senior Assistant Engineer Officer aboard the USS Lexington in action against Japanese forces in the Coral Sea on May 8, 1942. He contributed materially to the restoration of the ship to normal following the original damage suffered in the action that day. When subsequent damage doomed the ship he remained at his past, inspiring his men by his own courage and devotion to duty. When the order to abandon ship was received, he first assured himself that every person had been evacuated before taking his own safety into consideration, thereby materially contributing to the small loss of life sustained.”

Upon his return to the United States, he was under instruction at the First Sonar School, San Diego, California, in July and August 1942, and in September assumed command of the USS Crane. A year later he became Commanding Officer of the USS Balch, and in that capacity participated in the Toem-Wakde-Sarmi area operation and the Biak Island operation in May and June 1944. He was awarded the Bronze Star Medal with Combat “V,” and citation which follows in part:

“For meritorious service as Commanding Officer of the USS Balch in operations against enemy Japanese forces in the vicinity of Dutch New Guinea from October 1943 to June 1944. Acting as Officer in Technical Command of a fire support unit (he) rendered invaluable service in the bombardment of the Wakde-Sarmi-Area and maintaining his ship in a high state of combat readiness participated in the bombardment of Biak Island and carried out important screening missions during operations against Humboldt Bay…”

Detached from the Balch in October 1944, he returned to te United States in serve throughout the remainder of the war period and until June 1946 in the Planning Division of the bureau of Ordnance, Navy Department. In July of that year he was designated Hydrographic Advisor to the Naval Advisory Group, China. He served in China until December 1948, and in January 1949 returned to the Navy Department for a four tour of duty in the Office of the Chief of Naval Operations, assigned to the Division of Naval Missions and Advisory Groups.

He commanded the USS Eldorado in the Korean Area from February to November 1953, and early in 1954 was named Commanding Officer of the US Naval Station, Subic Bay, Luzon Philippine Islands. On September 28, 1954 he was designated Commander Naval Base, Subic Bay.