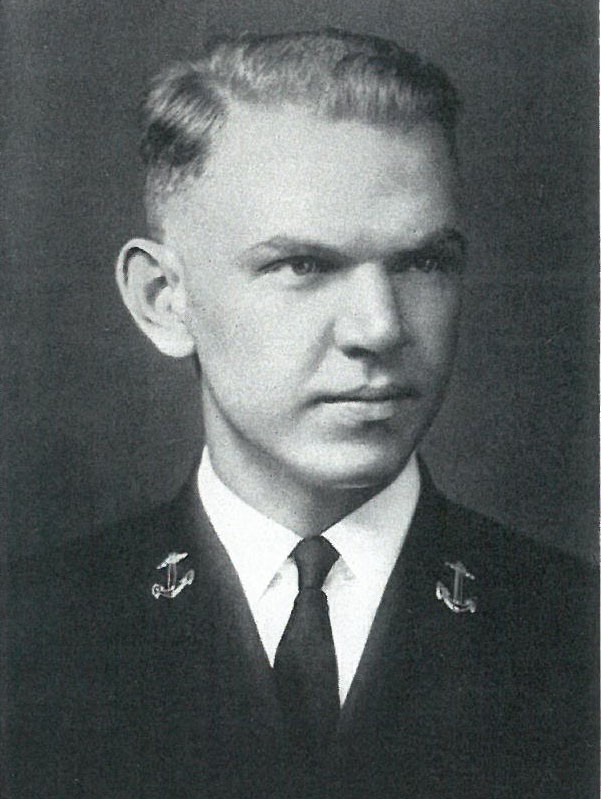 Roy Gene Anderson was born in Neosho, Missouri on 24 December 1915, son of Roy Godfred and Ila Gene (Bowers) Anderson. He attended Neosho High School and Kansas State Teachers College, Pittsburgh, prior to entering the US Naval Academy, Annapolis, Maryland, on appointment from his native state in 1936. Graduated and commissioned Ensign on 6 June 1940, he subsequently advanced in rank to that of Rear Admiral, to date from 1 December l965.

Following graduation from the Naval Academy in 1940, he joined USS Minneapolis and was serving with that cruiser when the United States entered World War II, 8 December 1941. He received the Navy Commendation Medal with Combat "V". The citation follows in part:

"For heroic conduct...as Control Officer, FIFTH Battery, USS Minneapolis in the Battle of the Coral Sea on 7-8 May 1942. He maintained excellent fire discipline while under attack by Japanese high bombers and torpedo planes of which four were Shot down..."

Detached from the Kingfish in June 1945, he was a student at the Postgraduate School, Annapolis, Maryland until June 1946, then continued instruction at the California Institute of Technology at Pasadena, from which he received the degree of Master of Science in aeronautical engineering in June 1947. He next had duty in connection with guided missiles in the Bureau of Ordnance, Navy Department, Washington, DC, and in March 1948 reported as Executive Officer of USS Cusk. In December 1949 he assumed command of USS Carbonero and in November 1951 was relieved of that command for an assignment in the Office of the Chief of Naval Operations, Navy Department, Washington, DC, concerned with submarine launched guided missiles. There he also had duty as the Chief of Naval Operations REGULUS Project Officer.

In November 1953 he joined the Staff of Commander Submarine Squadron FIVE as Operations Officer and in May 1955 became Commander Submarine Division FIFTY-ONE (guided missile division of submarines). In December 1955 he reported as Plans Officer in the Special Projects Office, Navy Department. He was awarded the Legion of Merit. The citation states in part:

"...Responsible for coordinating the overall program planning for the establishment of an operational United States Navy Fleet Ballistic Missile capability, (he) personally supervised the preparation of many complex program plans to meet the various fleet readiness conditions required..."

In August 1958 he reported as Chief of Staff to Commander Submarine Squadron FOURTEEN (first Polaris submarine squadron) and in August 1960 joined the Joint Staff of the Commander in Chief, Atlantic. From August 1962 to January 1963 he attended the Industrial College of the Armed Forces, Washington, DC, after which he served as NATO Nuclear Planning Officer in the Office of the Chief of Naval Operations, Navy Department. There he also served as Deputy to the Chairman, Multilateral Force Working Group.

In August 1964 he assumed command of USS Taconic (AGC-17) and in June 1965 became Commander Amphibious Group FOUR. In the latter assignment, he participated, as Commander Amphibious Task Group in Exercises CLOVE HITCH I and BEACHTIME and as Amphibious Opposition Commander in PHIBASWEX I 65/MEBIEX 2/65 and LANTFIEX  66. He was awarded a Gold Star in lieu of the Second Legion of Merit "for exceptionally meritorious service from June 1965 to January 1967..." The citation further states in part: "...Throughout this period, Rear Admiral Anderson exercised operational control of the Caribbean Ready Group, resulting in a steadily increasing degree of readiness of this Group to perform its tasks..."

In March 1967 he reported as Senior Navy Member, Military Studies and Liaison Division, Weapons Systems Evaluation Group, Office of the Secretary of Defense and was awarded a Gold Star in lieu of the Third Legion of Merit for his "...highly important contributions to the Weapons Systems Evaluation Group study program spanning the fields of strategic and tactical warfare, command and control, and logistics and mobility..."

Assigned in February 1970 to the Office of the Chief of Naval Operations, Navy Department, he was Director of the Long Range Objectives Group until August of that year, when he became Director of the Systems Analysis and Long Range Objectives Division. For his "...superior professional competence in maintaining the Navy's system analysis capability in managing the Chief of Naval Operations Study Program and in implementing and coordinating Study Program results..."  he was awarded a Gold Star in lieu of the Fourth Legion of Merit. In May 1971 he assumed command of the Service Force, US Atlantic Fleet and in January 1973 became Commandant of the Fifth Naval District, headquartered in Norfolk, Virginia, with additional duty as Commander of the Naval Base, Norfolk.