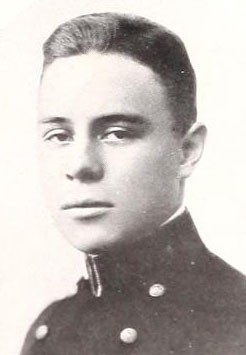 Walter Frederick Christmas, son of Adolph F. and Constance Eskildsen) Christmas, was born in Pittsburgh, Pennsylvania, on June 2, 1898. He attended public schools in Pittsburgh, Easton, and Lafayette, College, Easton, Pennsylvania, before his appointment to the United States Naval Academy, Annapolis, Maryland, in 1916. Upon graduating with the Class of 1920 to June 6, 1919, he was commissioned Ensign and advanced progressively to the rank of Captain to date from June 12, 1942. He was transferred to the Retired List if the Navy on June 20, 1950.

Following his graduation in 1919, he served in that battleship Nevada for a year, and returned to Annapolis for instruction at the Postgraduate School. After a year there he entered Massachusetts Institute of Technology at Cambridge to continue the course in Naval Construction, receiving the degree of Master of Science from that institute in 1923. The next four years he had duty at the New York Shipbuilding Company. Camden, New Jersey, as Assistant Inspector during the construction of the USS Saratoga. When that aircraft carrier was commissioned on November 16, 1927 he served aboard as technical advisor to the First Lieutenant and Engineer Officer for one year.

Ordered to the Asiatic Station, he had a tour of two years duty at the Navy Yard, Cavite, Philippine Islands, where he was Shop Superintendent, having additional duty for three months in India and Burma to inspect teakwood. Back in the United States, he returned to the Naval Academy as Inspector in the Department of Electrical Engineering until ordered in 1934 to the Navy Yard, Philadelphia, Pennsylvania for duty as Hull Superintendent during construction of the heavy cruiser USS Wichita and destroyer Cassin, Shaw and Rhid.

When detached in 1938, he reported to the Navy Department, Washington, DC, for duty in the Bureau of Construction and Repair, Maintenance Division. (In 1940 that Bureau, combined with Bureau of Engineering, was redesignated Bureau of Ships.) From 1941 to 1945 he was head of the Ship Maintenance Branch, Bureau of Ships, and while in that assignment he had temporary additional duty in Europe and Africa in connection with the inspection of landing craft prior to their transfer to the Pacific area of operations. In May, 1945 he was ordered to the West Coast as Supervisor of Shipbuilding at San Pedro, California, and later as Assistant Industrial Manager for the Eleventh Naval District, San Diego.

In June, 1946 he was detached and ordered to the Canal Zone for duty as Superintendent of Mechanical Division, Panama Canal, Balboa Heights, with additional duty on the staff of the Governor. Detached in July, 1948, he reported early in August to the Navy Department for duty as Senior Hull Member, Board of Inspection and Survey. After January 26, 1949 he had duty as a Member of the Munitions Board, Department of Defense. He was serving when relieved of active duty pending his retirement on June 30, 1950.

For overall services in connection with the repair and maintenance of naval vessels and in supporting new ship construction during World War II, Captain Christmas received a Letter of Commendation with Ribbon from the Secretary of the Navy. In addition he was the Victory Medal (World War I); the American Defense Service Medal; the American Campaign Medal; European-African-Middle Eastern Campaign Medal; and World War Ii Victory Medal.