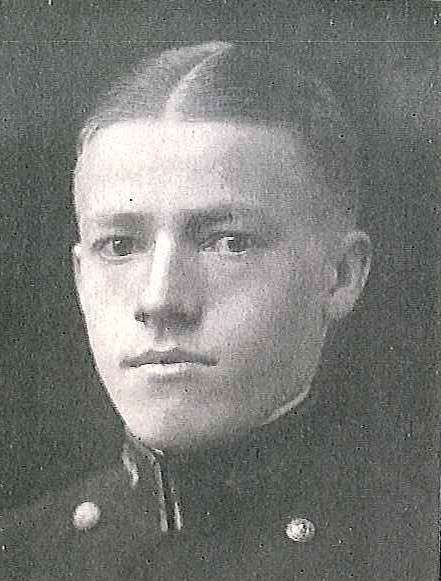 William Vincent Deutermann was born in New York City on August 9, 1900, son of William and Emma (Ward) Deutermann. He attended White Plains, New York, High School before entering the US Naval Academy, Annapolis, Maryland, from his native state on June 16, 1920. Graduated and commissioned Ensign on June 5, 1924, he subsequently advanced to the rank of Captain, to date from July 10, 1943.

Following graduation from the Naval Academy in June 1924, he had duty afloat until January 1927, in the battleships New Mexico and Arizona, the destroyers Kennedy and Henderson, and the oiler Neches. This period of sea duty was broken by brief training at the Naval Air Station, Pensacola, Florida, in 1926, and was followed by instruction in submarines at the Submarine Base, New London, Connecticut, from January to June 1927. Completing the latter course, he served successively V-1 and V-3 (renamed Bonita), until July 1931.

He returned to the Naval Academy in August 1931, for duty as an instructor in the Department of Seamanship and Flight Tactics until June 1933, then joined USS Tennessee, in which he served at sea for four years. He again returned to the Naval Academy, this time to start a period of instruction which continued at the California Institute of Technology until June 1940, and which ended with three months’ work at the Navy Yard, Washington, DC, and the Naval Air Station, Anacostia, DC, and six months at Quonset Point, Rhode Island. During that period he was awarded a degree in Aerology.

In March 1941 he reported as Aerological Officer at the Naval Air Station, Anacostia, DC, and was there during the early part of World War II until October 1942. As Aerological Officer of Lion #1, organized at Moffett Field, California, he went with that unit to the South Pacific to operate as a part of the Amphibious Force. From April 1943 until February 1944 he was assigned to the Staff of Commander, Third Amphibious Force as Aerological and Assistant Operations Officer.

“For meritorious service (in that capacity) during operations against enemy Japanese forces at Vella Lavella, Treasury and Cape Torokina on Bougainville, British Solomon Islands, from July 15, 1943, to February 1, 1944…” he was awarded the Bronze Star Medal with Combat “V.” The citation states that he “displayed outstanding skill in analyzing and forecasting all Aerological conditions and by his aid in the planning and directing of all movements of the task force, provided the force commander with vital information, thereby contributing materially to the successful defeat of the enemy in the South Pacific Campaign…”

Returning to the United States, he was attached successively, from March to May 1944, to the Amphibious Training Base, Solomons, Maryland, and Galveston, Texas. He then commanded LCI (L) Flotilla 15 until August 1945, and for “exceptionally meritorious conduct…in action against enemy Japanese forces during the landings at Ormoc, Leyte, Philippine Islands, December 15, 1944, and Mindoro, Philippine Islands, December 15, 1944…” he was awarded the Legion of Merit with Combat “V.” The citation states that he “…by his ability to the successful conclusion of two difficult and hazardous amphibious invasions..”

“For heroic achievement as Commander of a Task Unit in action against enemy Japanese forces in the Philippine Islands from April to July 1945…” he was awarded a Gold Star in lieu of the second Bronze Star Medal. The citation credits him with contributing materially “to the successful execution of amphibious landings on Bahol, Danao, Damaguete and the Sarangani Bay Area, Mindanao…” and effectively supporting the Twenty Fourth Infantry Division to the re-conquest of Cebu Island.

After the cessation of hostilities in August 1945, he served until November as a member of the staff of Commander Amphibious Group 9. Upon his return to the United States, he was ordered to the Navy Department, Washington, DC, where he had duty from January 1946 to June 1949 in the Administration and Plans Division of the Office of the Chief of Naval Operations. In July 1949 he assume command of USS Tatonic (AGC-17), and after a year in that command returned to the Navy Department for a second tour in the Office of the Chief of Naval Operations, this time as Head of the Fleet Operational Planning Branch, Fleet Operations Division.

In addition to the Legion of Merit with Combat “V,” and Bronze Star Medal with Gold Star and “V,” Captain Deutermann has the American Defense Service Medal; the American Campaign Medal; the Asiatic-Pacific Campaign Medal with four stars; the Philippine Liberation Ribbon; the World War II Victory Medal; and the Navy Occupation Service Medal, Asia Clasp.