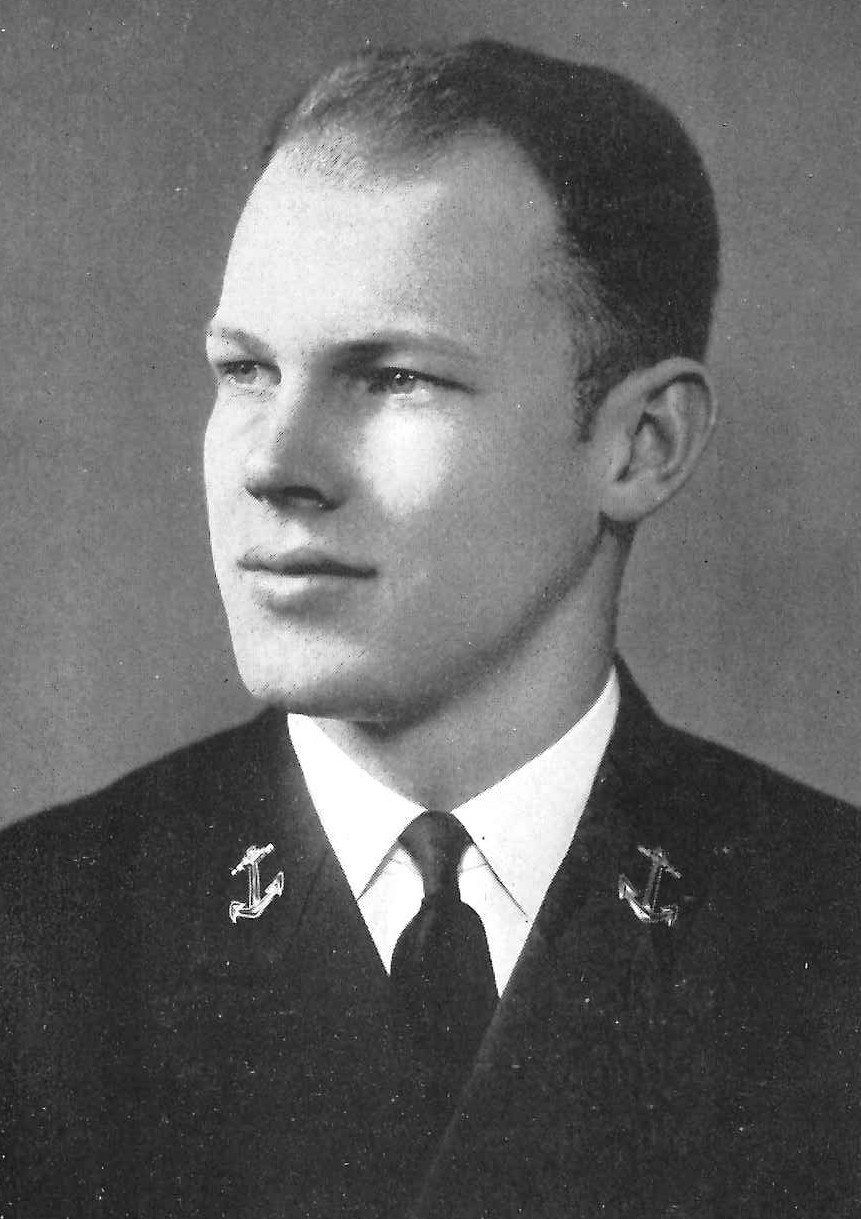 Wilbur Gardner Barton was born in Schenectady, New York, on February 28, 1917.  He attended Nott Terrace High School there and Bullis Preparatory School in Silver Spring, Maryland, before his appointment to the US Naval Academy, Annapolis, Maryland, in 1936.  He was graduated with the degree of Bachelor of Science and commissioned Ensign in the US Navy on June 6, 1940, he progressed in rank to that of Captain, to date from July 1, 1959.

Following graduation from the Naval Academy he was assigned to the USS West Virginia (BB-48), in which he had gunnery duty from July 1940 until that battleship was sunk during the Japanese attack on the United States Fleet at Pearl Harbor, Hawaii, on December 7, 1941.  He was then ordered to Motor Torpedo Boat Squadron ONE, and served as Executive Officer, later Commanding Officer of a PT Boat of that squadron until May 1942.  When detached he returned to duty as Gunnery Officer of the USS West Virginia, while she was undergoing salvage and repair during the next seventeen months.

From October 1943 until March 1945, he served as Gunnery Officer of the USS Bataan (CVL-29).  While so serving he participated in the Hollandia operation, April to June 1944, and in Asiatic-Pacific Raids, including Truk, Satawan and Ponape; the capture and occupation of Saipan, First Battle of the Philippine Sea, and the first and second Bonins raids.  During the period March through December 1945 he was Commanding Officer of the Anti-Aircraft Training Center at Pearl Harbor.

He returned to Annapolis in January 1946 and for the next eighteen months was a student of Aerological Engineering at the Naval Postgraduate School.  In June 1947 he reported as Executive Officer of the Navy Weather Control, San Diego, California, and in May 1948 was transferred to duty as Aerological Officer on the Staff of Commander Fleet Air Wing 14.  From April 1950 to February 1952 he was an instructor in Meteorology at the Navy General Line School, at Monterey, California, after which he was ordered to sea as Operations Officer of the USS Los Angeles (CA-135).  He was awarded the Bronze Star Medal, with Combat “V,” and the following citation:

“For meritorious service as Operations Officer on board the USS Los Angeles during operations against enemy aggressor forces in Korea from 10 October 1952 to 23 April 1953.  Throughout this period, Commander Barton discharged his duties with exceptional skill and initiative and effectively planned numerous gun strikes.  A capable and resourceful officer, he maintained the ship’s communications at a high state of efficiency and directed and supervised the Combat Information Center in providing continuous and accurate target bearing, range and ship position information to gunfire control personnel directing the fire of the main and secondary batteries, thereby contributing directly to the success of his vessel in destroying and damaging large numbers of installations and positions and in extensively disrupting enemy lines of communication…”

Detached from the USS Los Angeles in February 1954, he assumed command of the USS James E. Kyes (DD-787) in May of that year, and served in that command until September 1955.  In October he became Executive Officer of the US Naval Station, Guantanamo, Cuba, and in June 1958 was detached for duty in the Navy Department, Washington, DC.  There he served in Officer Assignment, Bureau of Naval Personnel, until July 1959, when he was ordered to the Naval War College Newport, Rhode Island, for instruction.  Upon graduation in June 1960, he was named Commander Destroyer Division 202, and served in that command until August 1961.

Under orders of May 5, 1061, he assumed command of the Fleet Sonar School at the Naval Base, Key West, Florida, and later commanded the Fleet Training Group there.  On March 29, 1964, he was ordered to the Navy Department, Washington, DC, and in April was assigned to the Office of the Secretary of Defense, Washington, DC.