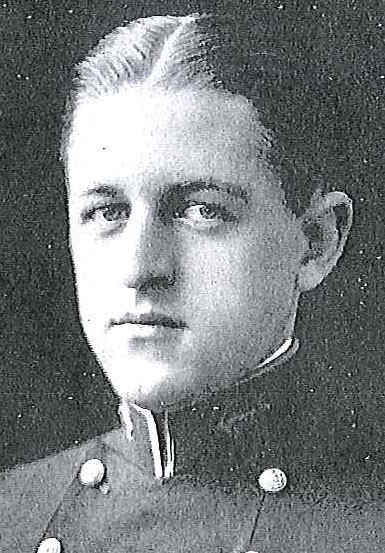 Andrew Madison Raplee Fitzsimons was born in Grand Rapids, Michigan, on October 31, 1900, son of Henry Allen and Mary J. (Hackett) Fitzsimmons. He attended Central High School in Grand Rapids and Ferris Institute, at Big Rapids, Michigan, prior to his appointment to the U.S Naval Academy, Annapolis, Maryland, which he entered on June 27, 1918. He was graduated with the Class of 1922, and commissioned Ensign in the U.S Navy on June 3, 1922. He resigned his commission on November 9, 1924, and subsequently served as an Ensign in the U.S Naval Reserve from March 7, 1925 until June 21, 1932. Appointed Lieutenant Commander in the Naval Reserve on May 25, 1942, he advanced to the rank of Captain (T) on December 10, 1945, was transferred from the Naval Reserve to the US Navy on November 8, 1946, and was commissioned in the rank of Captain to date from July 1, 1949.

After graduation from the Naval Academy in June 1922, he had brief duty as a student officer in the Bureau of Ordnance, Navy Department, Washington, DC. In September of that year he reported to the USS North Dakota, and served on board that battleship as a junior Engineering Division Officer until June 193. During the remaining months of 1923, he was attacked to the Office of Naval Communications, Navy Department, where he had duty under instruction, before reporting in January 1924 as Communications Officer of the USS Antares. Detached in June of that year, he had instruction at the Submarine School, New London, Connecticut, and on board the USS Chewick from July 1924 until his resignation was accepted in November of that year.

As a civilian he did graduate work at New York University Graduate School, and prior to his World War II service was Manager of the West Coast “Defense Special” Train, Office of Production Management in November- December 1941.

In May 1942 he reported to the Navy Department, Washington, DC, and served throughout the remaining World War II period in the Bureau of Ships, where he was in charge of Diesel Engine production. He received a Letter of Commendation with authority to wear the Commendation Ribbon, from the Secretary of the Navy, which follows in part:

“Commander A.M.R. Fitzsimmons, USNR, while serving in the Bureau of Ships, Internal Combustion Engine Section, was directly responsible, in his capacity as Officer in Charge of the Sub-station involved, for the scheduling, progress and expediting of internal combustion engines and spare parts for the shipbuilding and maintenance program. His outstanding quality of leadership, tact, good judgment, devotion to duty and organizational ability, coupled with great zeal, resulted in the formation of an extremely effective organization… His contribution to the successful prosecution of the war was significant and deserving of the highest praise…”

Detached from the Bureau of Ships in February 1946, he was a student at the Rensselaer Polytechnic Institute, Troy, New York, during the next four months, completing the course in Management Engineering in June 1946. In July if that year he reported to the Charleston Navy Yard, Charleston, South Carolina, where he served for three years as Industrial Engineering Officer, and Planning and Estimating Superintendent.

From July 1949 until March 1951 he served as Assistant Inspector General, Office of Industrial Survey, Office of the Chief of Naval Operations, Navy Department, after which he returned to the Bureau of Ships for duty as Shipbuilding Budget Officer. That tour completed in January 1953, he reported in February to the San Francisco Naval Shipyard, San Francisco, California, where he served as Industrial Engineer Officer and collaterally, from September 1953 as Comptroller. Under orders of March 9, 1956, he was detached and currently served as Commanding Officer, Office of Naval Research Branch Office, Pasadena, California.