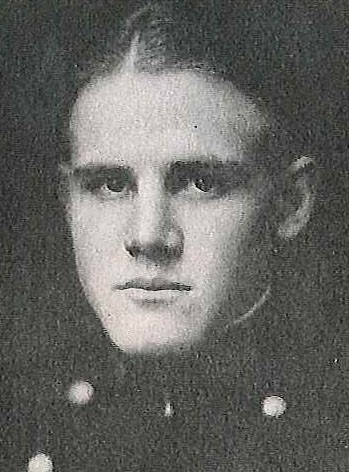 Captain Folk was born in Nashville, Tennessee, on November 10, 1901. He attended Webb School at Bell Buckle, Tennessee, and was a student for a year at Vanderbilt University where he was a member of the Phi Delta Theta fraternity before his appointment to the Naval Academy, Annapolis, Maryland, from Tennessee in 1919. While a Midshipman he was on the soccer and tennis squads, and served on the staff of the Academy publications, “The Log” and “The Lucky Bag.” Graduated with the Class of 1923, he was commissioned Ensign on June 7, 1923, and advanced in grade until his promotion to Captain, to rank from July 10, 1943.

After graduation, Captain Folk reported to the battleship West Virginia, which was commissioned in December, 1923. Thereafter he had successive duty aboard the light cruiser Galveston, then based on Panama, as watch and division officer, and as communication officer of the destroyer Toucey. In the spring of 1928 he was assigned to Eagle 35, and after a year and a half aboard as executive officer, he was transferred to the light cruiser Raleigh, for duty as anti-aircraft battery officer.

Captain Folk was ordered to the Naval Academy in 1930, for duty as company officer in the Executive Department. Completing that tour of duty in 1932, he reported for duty with the Asiatic Fleet, serving first aboard Panay as chief engineer and later as executive officer of Monocacy, until 1934. He was then ordered to the Philippines, where he served as Assistant Asiatic Communication Officer at Los Banos.

In 1935 Captain Folk returned to the Executive Department of the Naval Academy, and following a two-year tour of duty there, reported to USS California for duty as assistant first lieutenant and damage control officer. After nearly three years aboard the California, he was detached from that battleship and sent to the California Institute of Technology for a special course in meteorology. His first assignment as meteorological, or aerological, officer was at the Naval Air Station, Miami, Florida.

In June, 1942, Captain Folk was detached from the Naval Air Station, Miami, with orders to report to the Naval Supervisor of Shipbuilding at Newport News, Virginia, where he had duty in connection with fitting out USS Birmingham and went aboard as first lieutenant and damage control officer when that light cruiser was commissioned. Birmingham’s first combat assignment was the Sicilian Campaign, during which time she furnished fire support for landing operations at Licata, and later engaged in the bombardment of Agrigento.

Ordered to the Pacific in August 1943, Birmingham was attached to a fast carrier task force and participated in the strikes on Tarawa and Wake Island. In October she engaged in the Solomons campaign and there operated in support of the landing on Bougainville, during which operation she received her first battle damage. In an all-night action on November 8 and 9, Japanese aircraft broke through heavy AA fire to inflict two torpedo hits, one forward and one aft, and a bomb hit on #4 turret. In spite of the serious casualty inflicted, the damage control organization under Captain Folk restricted flooding to a minimum, thereby enabling Birmingham to continue fighting.

“For meritorious devotion to duty while serving on board a cruiser which was subjected to enemy air attacks during operations in the Solomon Islands area on the night of November 8-9, 1943. Commander Folk, as Damage Control Officer, through his zealous supervision and instruction of the damage control department, had brought his personnel to the peak of efficiency. As a result of his activity, his ship was able to complete her mission successfully and safely return to port despite the damage sustained. His conduct was in keeping with the highest traditions of the United States Naval Service.”

In January, 1944, Captain Folk became executive officer of Birmingham, while she was undergoing repairs on the West Coast. In May, 1944, Birmingham was back in action with the bombardment group shelling Japanese installations in the Shortland Islands. In June Birmingham participated in the amphibious assaults on Saipan, Guam, and Tinian in the Mariana Islands, pouring heavy fire power on the shore defenses. During this time she was temporarily assigned to the famous Task Force 58, and participated in the “Marianas Turkey Shoot” in the First Battle of the Philippine Sea, wherein more than four hundred Japanese aircraft were shot down.

After the Marinas campaign, Birmingham was assigned permanently to Task Force 58, and participated in air strikes against Palau, the Philippines, Okinawa, and Formosa. When the cruisers Houston and Canberra were severely damaged on a strike less than a hundred miles from Formosa, Birmingham was assigned to the force escorting the cripples back to port, and furnished anti-aircraft support against continuous air attacks on the precarious retirement, which was conducted at the speed of four (4) knots:

Birmingham engaged in the Second Battle of the Philippine Sea on October 24, 1944, and shared in the near annihilation of two attacking Japanese air groups. During this action, the carrier Princeton was mortally struck by a Japanese bomb and set ablaze. Birmingham was ordered back to assist Princeton, and drew alongside the stricken vessel. A volunteer fire-fighting party went aboard, and presently all but one fire had been brought under control. An underwater sound contact plus a new enemy air attack forced Birmingham to draw away from the crippled Princeton to gain sea room in which to better defend herself.

When those threats had been eliminated, Birmingham again drew alongside Princeton, just as Princeton’s magazine exploded. The air was filled with debris, and a column of smoke and flames billowed upward. Damage to Birmingham was severe and sixty percent of her officers and men were killed or wounded. In spite of serious and painful wounds to himself, Captain Folk proceeded to the main deck to investigate the damage and to organize first aid parties. After making arrangements for care of the injured, he returned to the bridge to find the Commanding Officer in such great pain from wounds received in the explosion that he was forced to relinquish command.

Captain Folk assumed command of Birmingham and rapidly organized the crippled ship and her company into a fighting unit. Under his direction all possible repairs were made, gun and control stations were manned, and preparations accomplished for towing Princeton if such decision were made. That night he was given the additional duty of Officer in Tactical Command of a task unit consisting of Birmingham and three destroyers. Under his command, the group retired, refueled at sea, and proceeded to the nearest anchorage.

“For exceptionally meritorious conduct in the performance of outstanding service as Commanding Officer of a light cruiser after the Captain had been incapacitated for duty by wounds received 24 October 1944, when magazines in an aircraft carrier blew up while the light cruiser was alongside fighting fires. He assumed command in spite of painful burns and shrapnel wounds and quickly reorganized the ship’s company, which had suffered over 50% casualties, into watches to man the necessary control and gun stations while leaving the maximum number of personnel to care for the wounded, dispose of the dead, make repairs and make preparations for towing the aircraft carrier, should such be required. Through his efforts his ship was ready in a very short time to continue fighting the enemy or to render further assistance to other ships. He was then made Officer in Tactical Command of a Task Unit consisting of the light cruiser and three destroyers with orders to retire, refuel at sea, and proceed to the nearest anchorage. During this entire period the ship was under constant threat of enemy air and submarine attack. In the successful performance of all these duties, his cool, courageous and capable leadership was an inspiration to all officers and men under his command, and at all times his conduct was in keeping with the highest traditions of the United States Naval Service.”

Captain Folk was detached from Birmingham while she was in drydock at Mare Island, California, on December 1, 1944, and ordered to the Todd Shipyards Corporation, Hoboken, New Jersey, for duty in connection with the conversion of USS Woodford, AKA 86, and on board as Commanding Officer when commissioned. Woodford was commissioned March 3, 1945, and under Captain Folk’s command operated in the Pacific from May to August in support of amphibious operations in the final phase of the war.

After V-J Day, Woodford was assigned to Transport Division 53 in Transport Squadron 13. In such capacity, Woodford participated in the initial occupation of Japan, carrying to Tokyo Bay the Americal Division, the only unnumbered division in the Army in World War II. (The name is a result of the combination of America and Caledonia, New Caledonia being the place where the division was formed.) Subsequently, Woodford participated in lifting the 77th, of Statue of Liberty, Division, to Hokkaido; and, then, the Third Amphibious Force to Taku in North China. Following the North China operation, Woodford  lifted her share of the Fifth Marines from Sasebo, Japan, to San Diego, arriving there December 31, 1945.

In February 1946, Woodford was ordered to the East Coast and on May 1, 1946, was placed out of commission. Captain Folk was Woodford’s only naval commanding officer.