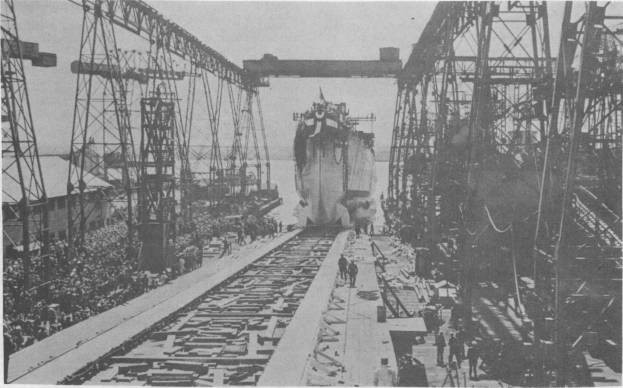 A coastal city in southeastern Texas located on Galveston Island.

The second Galveston (CL-93) was launched by William Cramp & Sons Shipbuilding Co., Philadelphia, Pa., 22 April 1945: and sponsored by Mrs. Clark Wallace Thompson. The cruiser's construction was suspended when nearly complete 24 June 1946; and the hull assignedto the Philadelphia Group of the Atlantic Reserve Fleet. She was reclassified CLG-93 on 4 February 1956; then reclassified to CLG-3 on 23 May 1957; and commissioned at Philadelphia 28 May 1958, Captain J. B. Colwell in command.

The warship departed Philadelphia on 30 June 1958 for builder's trials out of Norfolk, Va., in the Virginia Capes area, that included "highly successful" tests of her new Talos missile and tracking gear. The deadly Talos supersonic surface-to-air missile weighs nearly 3000 pounds, including a 40,000 horsepower ramjet engine; with a range of over 65 miles and is designed to destroy enemy aircraft at high altitudes using either a conventional or atomic warhead. She finished out the year with operations in the Norfolk area.

Galveston arrived at San Juan, Puerto Rico, 16 January 1959 for training and evaluation operations in waters of the West Indies. She successfully fired the first Talos missile ever shot at sea 24 February 1959. Termed by Admiral Arleigh Burke as "the best antiaircraft missile in any arsenal in the world," the Talos sent its payload off in a trail of bright orange flame. Galveston reported the shot "hot, straight and normal" as she proudly proved her capability as one of the most mighty warships of the modern United States Navy. The cruiser set course for Norfolk 17 March and a special yard period in the Philadelphia Naval Shipyard.

In July 1959 Galveston conducted shakedown and acceptance trials in the Virginia Capes area, followed by a refresher training cruise to waters off Cuba and the testing of her radar and communications in war games with the U.S. Air Force. On 4 January 1960 she departed Norfolk for a visit to Charleston, S.C., and operations off the Florida coast, Puerto Rico, and the Virgin Islands. She then headed to her namesake city of Galveston, arriving on 16 February for a Silver Service presentation. Returning to Norfolk, the cruiser unloaded her ammunition for shock tests off the Bahamas, then entered the Philadelphia Naval Shipyard on 25 March 1960 for a yard period that extended into the fall. During this time the cruiser entertained more than 30,000 visitors. She headed for the Virginia Capes 24 October 1960, successfully completing her first missile transfer at sea.

On 6 January 1961 Galveston departed Norfolk for more Bureau of Naval Weapons technical evaluation of her Talos missile systems, including tests of the IV Talos, its capabilities and potentials, in areas off Jacksonville, Fla., Puerto Rico and the Virgin Islands. These evaluations completed 1 March, she departed San Juan for refresher training and her final acceptance trial out of Guantanamo Bay. The cruiser returned to Norfolk on 9 April, but soon steamed to Jacksonville, Fla., where on 8 May she began duty under the Operational Technical Evaluation Force that included extensive testing of her missile system and many Talos firings. The effectiveness of the system and the weapon were demonstrated by a new, long-range record as well as a successful two-missile salvo shot. The Talos missile cruiser entertained over 17,000 visitors at Cape Canaveral on the Armed Forces weekend celebration in May; completed later phases of her evaluation exercises in the Caribbean through 21 July; then visited Bayonne, N.J., where her missile fire-control radars were removed preparatory to overhaul in the Philadelphia Naval Shipyard (30 August 1961-23 July 1962). This overhaul included modifications to the fire control system of the Talos missile.

Galveston departed Philadelphia on 23 July 1962, transited the Panama Canal for San Diego, Calif.; and joined Cruiser-Destroyer Flotilla 9, U.S. Pacific Fleet, on 24 August 1962. She operated along the West Coast until October 1963 when she sailed for the Western Pacific as flagship of the flotilla. During the next 6 months she operated in the Far East with the 7th Fleet off Japan, Taiwan, and Okinawa. She returned to San Diego 16 April 1964 and resumed West Coast training.

Following a 4-month overhaul from October 1964 to February 1965, Galveston departed San Diego 4 June for operations off the coast of South Vietnam. She touched at Subic Bay, Philippines, 21 June, then sailed to join the 7th Fleet in the South China Sea. During the next 5 months she ranged the Southeast Asian waters from the Gulf of Thailand to the Gulf of Tonkin while supporting the American effort to repel Communit aggression in South Vietnam. She provided gunfire support during search-and-clear operations at Chu Lai and at the Vun Tuong Peninsula. In addition she provided air defense for 7th Fleet carriers in the South China Sea and conducted search and rescue operations in the Gulf of Tonkin. She departed the Philippines 2 December and arrived San Diego 18 December.

Resuming operations early in January 1966, Galveston operated out of San Diego to the Hawaiian Islands and along the California coast while keeping her crew and equipment in a peak state of readiness. From 31 July to 4 November she underwent modernization overhaul, then she resumed training for the remainder of 1966. Early in 1967 she departed San Diego for the East Coast, and at present she is assigned to the Atlantic Fleet for duty in the Atlantic and the Mediterranean.