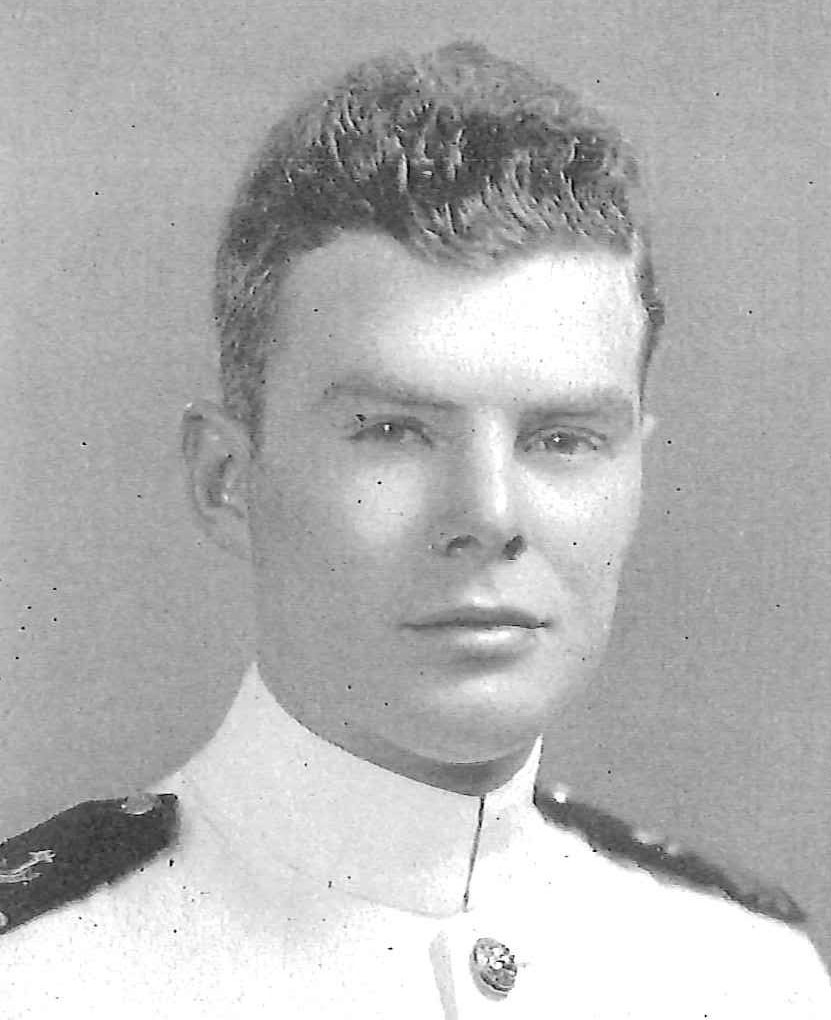 Kenan Clark Childers, Jr., was born Clovis, New Mexico, on March 27, 1917, son of K.C. and Katie Hamilton Childers. He attended Albuquerque High School and the University of New Mexico, both in Albuquerque, before his appointment to the US Naval Academy in 1935. As a Midshipman he was Company Commander, 7th Company, USNA; was Company Representative for three years; won his letter in soccer and participated in intramural basketball and tennis; and was on the “Lucky Bag” Advertising Staff. Graduated and commissioned Ensign on June 1, 1939, he subsequently advanced to the rank of Rear Admiral to date from June 1, 1967.

Upon graduation from the Naval Academy in June 1939, he was assigned to USS Salt Lake City in which he served until August 1941 as a junior officer in the Engineering Division and the Deck Division, and later as Turrent Officer. In September 1941 he reported to the Naval Air Station, Pensacola, Florida, for flight training, and was designated Naval Aviator in February 1942. During the nine months following, he was attached to USS Ranger, as a pilot of Fighter Squadron 9, based on that carrier.

He was awarded the Silver Star Medal: “For conspicuous gallantry and intrepidity…during the occupation of French Morocco, November 8-11, 1942…” The citation further states:

He personally silenced two machine-gun emplacements and destroyed two aircraft on the ground at Rabat; over Fedala, shot down one plane and possibly another. The next day, under tremendous anti-aircraft fire, he demolished tow vehicles and one machine-gun nest and in Casablanca harbor, swept down hostile destroyers and raked their decks with machine-gun fire.

Transferring to USS Essex in January 1943, he served first as a pilot of Fighter Squadron 9, and later as Squadron Executive Officer. He has the Ribbon for, and a facsimile of the Presidential Unit Citation awarded the USS Essex and her attached Air Groups for heroism in action between August 31, 1943 and August 15, 1945. He was personally awarded the Air Medal and a Gold Star in lieu of the second Air Medal and the Navy Commendation Medal for outstanding service during the period he was attached to that carrier, January 1943 to February 1944. The citation follow in part:

Air Medal: “….At Tarawa… from November 18 to 25, 1943 (he) fought his plane through intense and withering enemy aircraft fire to carry out repeated, swift and aggressive strikes against an important hostile base, inflicting extensive damage to Japanese shore installations grounded planes and small craft in the area…”

Gold Star in lieu of Second Air Medal: “…At Truk Atoll, February 16-17, 1944, (he) rendered valuable assistance as an air observer by transmitting target information to incoming strikes…. (and) personally destroyed several enemy bombers on the ground, set fire to a small auxiliary in Truk Lagoon and contributed directly to the infliction of severe damage to Japanese shipping and installations….”

Letter of Commendation: “For meritorious and efficient performance of duty as Pilot and Division Leader of a fighter squadron during a strike against enemy shipping in Rabaul Harbor, New Britain, on November 11, 1943…”

Returning to the United States in March 1944, he had instruction in Aeronautical Engineering at the Postgraduate School, Annapolis, and the California Institute of Technology, at Pasadena, California, and received the degree of Master of Science from the latter in June 1946. In July of that year he reported for a year’s duty in connection with damage trails on aircraft, at the New Mexico School of Mines. From August 1947 to July 1949 he was an instructor in the Guided Missiles School at Fort Bliss, Texas.

In August 1949 he reported to the Bureau of Aeronautics, Navy Department, Washington, DC, where he served (1) as Assistant Director of Ships Installations Division; (2) as a Member of NACA Special Sub-committee; and (3) as a Member of the Research and Development Board Panel on Propulsion and Fuels. Detached in July 1953 he was assigned until January 1956 to the Naval Air Missile Test Center, Point Mugu, California, and during the next five months to the Air Research and Development Command, Inglewood, California. From August 1956 to January 1961 he was assigned to the Naval Ordnance Test Unit, Patrick Air Force Base, Cocoa, Florida.

For outstanding service while Head of the Special Project Field Officer there from October 1, 1957 to September 20, 1960 was awarded the Legion of Merit. The citation states that his “…invaluable work in the field of tests, test facilities and project management were contributing factors toward equipping the United States and the rest of the free world with the Fleet Ballestic Missile Weapons System…”

In January 1961 he became Commander Naval Missile Center, Point Mugu, California and in September 1964 was assigned to the Bureau of Naval Weapons, Navy Department, where he served as Deputy Project Manager, Phoenix Missile System. He transferred in October 1965, in a similar capacity, to the Officer of Naval Material, Navy Department. Upon the re organization of the Navy Department, effective May 1, 1966, he was assigned as Deputy Project Manager, F11B/Phoenix Project Office, Naval Air Systems Command. In May 1967 he assumed duty as Assistant Commander for Material Acquisition, Naval Air Systems Command Headquarters, Washington, DC, and “for exceptionally meritorious service… (in that capacity) from June 1967 to August 1969…” was awarded a Gold Star in lieu of the Second Legion of Merit.

In August 1969 he reported as Naval Air Systems Command Representative, Atlantic, headquartered at the Naval Air Station, Norfolk, Virginia and was awarded a Gold Star in lieu of the Third Legion of Merit and cited in part as follows: “…Rear Admiral Childers was responsible for improved technical coordination, administrative control and liaison functions in matters of fleet support, readiness and training in the Atlantic area…’ He continued to serve in that capacity until relived of active duty pending his retirement, effective July 1, 1972.