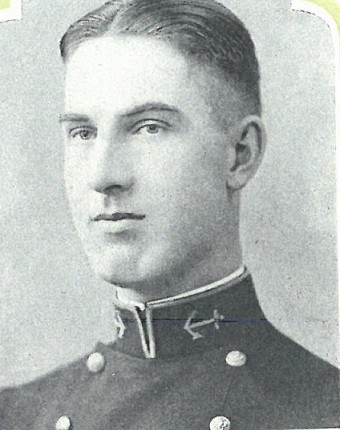 John Crawford Zahm was born in Washington, DC, on 5 April 1906, son of the late Lieutenant Commander Frank B. Zahm, CC, USN and Mrs. Josephine (Collins) Zahm. He attended Freehold Military School; Peekskill Military Academy, Peekskill-on-the-Hudson, New York; and Staunton (Virginia) Military Academy, prior to his appointment, at large, to the US Naval Academy, Annapolis, Maryland, in 1923. As a Midshipman he participated in fencing, in which he received his “N” with stars and tennis. Graduated and commissioned Ensign on 2 June 1927, he progressed in rank to that of Captain, to date from 20 March 1945.

Following graduation from the Naval Academy in 1927, he remained there for the summer course in aviation, prior to reporting in August of that year on board USS California. Detached from that battleship in September 1929, he was ordered to Asiatic Station for duty in USS Rizal. During August and September 1930 he was attached to USS Beaver, after which he was assigned to USS S-37. In February 1931 he joined Beaver to serve until July 1931 and from September of that year until March 1933 he was Communication and Gunnery Officer on board USS Tennessee.

He next commanded USS Sotoyomo (a harbor tug built under his father’s supervision), and in June 1933 joined USS Ortolan. Detached from that submarine rescue vessel in June 1934, he was under instruction (General Line course) at the Postgraduate School, Annapolis, Maryland, until May 1935, when he assumed command of USS Eagle 56. In June 1936 he reported as Gunnery Officer on board USS Tracy, and in August 1936 transferred to USS Preble. He was assigned as Executive Officer and Navigator of USS Goff between April 1937 and July 1939, followed by duty as an Instructor in Mathematics at the Naval Academy.

In March 1941 he reported as Damage Control Officer and First Lieutenant on board USS North Carolina, continuing to serve in that capacity, after the United States entered World War II, 8 December 1941, until September 1943. Ordered to the Bath (Maine) Iron Works, he was in charge of fitting out USS Walke and assumed command of that destroyer upon her commissioning, 21 January 1944. “For conspicuous gallantry and intrepidity…(in that command)…in action against enemy forces during the approach and assault on the Continent of Europe by the Allied Expeditionary Force, from 3 June to 24 July 1944…” he was awarded the Silver Star Medal.  The citation continues in part:

“Escorting a large convoy of combat-loaded landing craft safely and expeditiously through heavily mined waters, Captain (then Commander) Zahm screened heavy combatant ships, transports and other craft in the assault area against enemy submarine and surface threats and against daily enemy air attacks…”

Detached from command of Walke in November 1944, he then became Commander Destroyer Division ONE HUNDRED TWENTY.  For outstanding services in that command he was awarded the Gold Stars in lieu of a Second and Third Silver Star Medal, the Bronze Star Medal with Combat “V”, and the Navy Cross. The citations follow in part:

Gold Star in lieu of the second Silver Star Medal: “For conspicuous gallantry and intrepidity…in action against enemy Japanese forces in Ormoc Bay, Leyte, Philippine Islands, on the night of 2-3 December 1944. Although operating in confined enemy controlled waters under continual and aggressive air attack and fire from hostile shore positions, (he) led his group in a successful raiding sweep of enemy shipping, shore installations and concentrations to destroy hostile shipping and planes and to repulse attempts of the Japanese to reinforce their hard pressed ground troops in these areas.  By his leadership and gallant devotion to duty, (he) contributed materially to the success of our operations in the Philippines…”

Gold Star in lieu of the Third Silver Star Medal: “For conspicuous gallantry and intrepidity…in action against enemy Japanese forces at Lingayen Gulf, Luzon Island in the Philippines, from 3 to 14 January 1945. Although the ships of his command were repeatedly subjected to formidable aircraft attacks and heavy fire from Japanese shore batteries, Captain (then Commander) Zahm directed his division with such painstaking preciseness and excellent judgment that a number of dangerous operations were flawlessly carried through to successful completion prior to the invasion of Luzon and after landings were in progress. Under his courageous leadership, an effective screen was provided for other Fleet units against enemy planes and submarines and vital support given to our minesweepers and underwater demolition teams operating in Lingayen Gulf. Standing off-shore, within perilous range of shore guns, the destroyers, following his expert and decisive orders, pounded the enemy in a terrific bombardment of beach and inland positions. His astuteness and inspiring skill as a Commander, his great personal courage and valiant devotion to duty enabled him to contribute immeasurably to the ultimate success of our forces in this area…”

Bronze Star Medal: “For heroic achievement as a Task Unit Commander in action against enemy Japanese forces in the Western Pacific Waters, 17-18 February 1945. Skillfully leading his task unit of three destroyers along the retirement track of Task Force FIFTY-EIGHT, ahead of the Task Force to Saipan, (he) valiantly directed his group in two night surface engagements with the enemy, pressing home his attack at close range with accurate 5-inch and 40-mm. fire to send the Japanese vessels blazing to the bottom of the sea, thereby preventing contact of these hostile vessels with the main body of our forces. By his aggressive leadership, fighting spirit and professional skill in maneuvering the ships under his command, he was largely instrumental in preventing damage to any of his destroyers despite heavy return fire by the enemy,…”

Navy Cross: “For extraordinary heroism as Commander Destroyer Division ONE HUNDRED TWENTY and Officer-in-Tactical Command of a Radar Pickett Group in action against enemy Japanese forces in the vicinity of Okinawa on 4 May 1945. When large groups of enemy planes approaching from the Japanese Homeland broke through our combat air patrol and attacked his picket group, Captain (then Commander) Zahm expertly maneuvered his ships to meet the savage suicide attacks. With one ship sinking after being hit by four hostile planes, he organized rescue operations to pick up survivors while keeping the enemy under maximum fire and, after his flagship received a hit which destroyed radio communications, directed friendly fighters by firing shell bursts in the direction of approaching planes…”

He is also entitled to the Ribbon for and a facsimile of the Navy Unit Commendation awarded the USS Ingraham, which was his flagship during the action at Okinawa on 4 May 1945.

In October 1952 he became Senior US Navy Advisor to the Brazilian Naval War College, Rio de Janeiro, and continued to serve in that capacity until June 1955, when he was ordered to the Fourth Naval District, Philadelphia, Pennsylvania, for duty.

He was married to the former Elizabeth Shorey and they had a daughter. Captain Zahm passed away 19 February 1968.