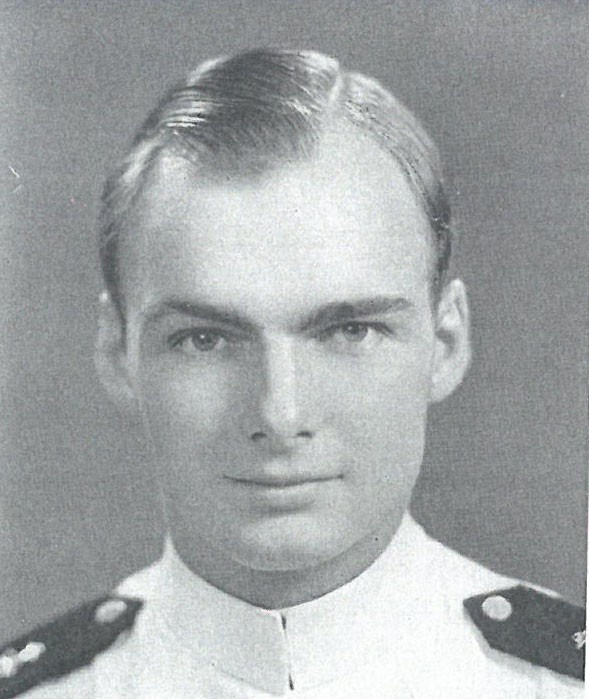 Lawrence Davidson Caney was born in Gardiner, Maine, on July 3, 1921, son of Robert Davidson and Madelon (Lawrence) Caney.  He attended Gardiner High School and Bowdoin College, Brunswick, Maine, prior to entering the US Naval Academy, Annapolis, Maryland, from the State of Maine 1939.  Graduated and commissioned Ensign on June 19, 1942, with the Class of 1943 (course of instruction accelerated due to World War II), he subsequently attained the rank of Captain to date from July 1, 1962.

Following graduation from the Naval Academy in 1942, he joined USS Forrest (DD-461), and while on board that destroyer participated in the Algeria-Morocco landings, the Norway raid, and the invasions on Normandy and Southern France.  Detached from the Forrest in September 1944, he had instruction at the Ordnance and Gunnery Schools, Navy Yard, Washington, DC, from October 1944 until January 1945, after which he had gunnery training at the Destroyer Officer Training School, Naval Training Station, Norfolk, Virginia.

In March 1945 he was assigned to the Consolidated Steel Corporation, Orange, Texas, to assist in the fitting out of USS Leary (DDR-879).  He joined that destroyer as Gunnery Officer upon her commissioning, May 7, 1945.  He served as Executive Officer and Navigator of USS Rogers (DDR-876), from February 1946 until August 1947, after which he commanded USS Cree (ATF-84) until March 1948.  He was next assigned to the Officer Distribution Branch, Bureau of Naval Personnel, Navy Department, Washington, DC, and in July 1950 reported as Aide and Flag Secretary on the Staff of Commander Cruiser Division TWO.

He attended the Command and Staff Course at the Naval War College, Newport, Rhode Island, August 1952-June 1953, then assumed command of USS Raymond (DE-341).  Detached from that destroyer-escort in July 1955, he reported in September for duty on the Staff of Commander Destroyer Flotilla SIX.

He served on the Joint Staff of the Commander in Chief, US Forces, Europe, from August 1957 until July 1959, and the following month reported for instruction at the Naval War College, Newport, Rhode Island.  Completing the course there in August 1960, he then assumed command of USS Henry B. Wilson (DDG-7).  Detached from that guided missile destroyer in July 1962, he was assigned the next month as Commander Destroyer Division ONE HUNDRED SEVENTY TWO.

He served on the Staff of Commander Cruiser Destroyer Force, Pacific Fleet from September 1963 until August 1965, and in September became Commander Destroyer Squadron FIVE.  In December 1966 he reported for duty in the Strategic Objectives Plans Branch, Strategic Plans Division, Office of the Deputy Chief of Naval Operations (Plans and Policy), Navy Department, Washington, DC.