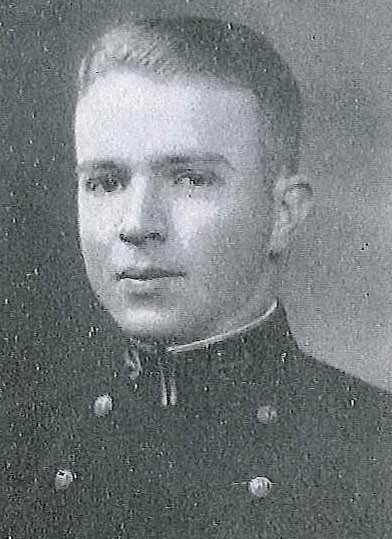 Robert John Esslinger was born on April 3, 1908, in Trenton, Ohio, the son of Albert F. Esslinger and Mrs. (Rosina A. Engle) Esslinger. He attended Central High School, Ypsilanti, Michigan, prior to his appointment to the US Naval Academy, Annapolis, Maryland, from the Second District of Michigan in 1926. Graduated and commissioned Ensign on June 5, 1930, he subsequently attained in the rank of Captain to date from May 1, 1949, having served in that rank (temporary from December 10, 1945 to January 1, 1948.

He had instruction in Naval engineering at the Postgraduate School, Annapolis, Maryland, until May 1939, continuing the course at the Massachusetts Institute of Technology at Cambridge, where he received the degree of Master of Science in 1940. Completing his instruction in May 1940, he had fitting out duty in the USS Kearny, building at the Federal Shipbuilding and Dry Dock Company, Kearny, New Jersey. Upon her commissioning on September 13, 1940, he joined her as Engineer Officer and served as such until the Kearny was torpedoed in the North Atlantic on October 17, 1941, he was awarded the Navy Cross. The citation follows in part:

“After a quick and accurate analysis of the situation (he) working under extremely hazardous and difficult conditions, coolly and skillfully surmounted all obstacles and kept the engines operative, permitting the Kearny to proceed out of the dangerous submarine area and make port….”

In January 1942, he again had fitting out duty at the Federal Shipbuilding and Dry Dock Company, this time in USS Buchanan. After her commissioning, March 21, 1942, he served as Executive Officer of that destroyer until January 1943. He is entitled to the ribbon for and a facsimile of the Presidential Unit Citation award the officers and men of USS Buchanan. The citation is quoted in part: “A daring and aggressive veteran after a long period of sustained service in support of landing operations and occupation of hostile positions vital to the continued security of our forces, USS Buchanan has met and engaged the enemy in his own waters, striking devastating blows while Japanese opposition in the Pacific was at its height. She has provided faithful and sturdy protection for our carriers and convoys; she has destroyed hostile air, surface and sub – surface units; she boldly faced shore batteries of the enemy and silenced his guns…”

Returning to the United States he was assigned to the Bureau of Naval Personnel, Navy Department, Washington, DC, until November 1944, and in February 1945 assumed command of USS Sproston. He was awarded the Silver Star Medal for “conspicuous gallantry and intrepidity as Commanding Officer of USS Sproston in action against enemy Japanese forces off Okinawa from April 30 to June 1, 1945. The citation continues in part:

"While on radar picket duty stationed in advance of other units of the Fleet (he) skillfully fought his ship against attacking suicide and bomber planes and , directing his gun batteries in throwing up accurate antiaircraft firs which resulted in the destruction of several hostile aircraft, defeated all attacks by enemy planes….”

Detached from the Sproston in November 1945, he became Commander Destroyer Division ONE HUNDRED and in January 1946 transferred in a like capacity to Destroyer Division ONE HUNDRED TWENTY-FOUR.  Relieved of the latter duty in April 1946 he served as Commanding Officer of USS Alcona until November 1946, after which he joined the staff of Commander Service Division THIRTY-TWO, commanding that Division between April and July 1947. Following duty with the Norfolk (Virginia) Group Atlantic Reserve Fleet, he reported in July 1950 as Commanding Officer of USS Aucilla (T-AO 56).

In addition of the Navy Cross, the Silver Star Medal, the Purple Heart Medal (for wounds received in action on November 13,1942 while serving in a temporary assignment of the staff of Commander Destroyer Squadron Twelve), and the Presidential Unit Citation Ribbon, Captain Esslinger has the American Defense Service Medal, Fleet Clasp; the American Campaign Medal; the Asiatic- Pacific Campaign Medal with one silver star (five engagements); the World War II Victory Medal; and the Navy Occupation Service Medal, Asia Clasp.