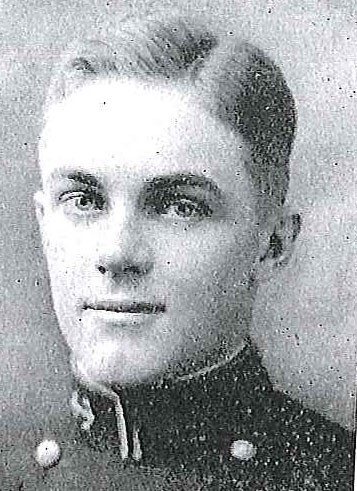 Edwin Boardman Dexter was born in Urbana, Illinois, on October 7, 1906, son of the late Dr. Edwin Grant Dexter and Mrs. Allie Hodge Dexter. His childhood was spent in Puerto Rico and Panama, and in 1918 his family returned to the United States. He continued his early education at Worcester Academy, Worcester, Massachusetts, and the Chillicothe Ohio, High School, being graduated from the latter in 1924. In September of that year he entered the US Naval Academy, Annapolis, Maryland, on appointment of the Honorable Mel G. Underwood, Congressman from the Eleventh District of Ohio. As a Midshipman he was Editor-in-Chief of the “Log,” and played football and water polo. Graduated with the Class of 1928 and commissioned Ensign to rank from June 7, 1928, he subsequently advanced to the rank Captain on March 25, 1945. He was transferred to the Retired List of the Navy and promoted to the rank of Rear Admiral on March 1, 1949.

Following graduation from the Naval Academy in June 1928, he served successively until 1930 in USS Pennsylvania, flagship of Battleship Division 3, Battle Fleet, and USS Oklahoma, also operating with Battleship Division 3. While attached to USS Houston, Flagship of the US Asiatic Fleet in 1931-1934, he was present in Shanghai when that city was bombarded and attacked by the Japanese early in 1932. In 1934-1935 he served as Gunnery Officer of USS Biddle, a unit of Destroyer Division 3, Destroyers, Scouting Force, US Fleet.

Reporting in the summer of 1935 to the Naval Training Station, San Diego, California, he served on the staff there until July 1937, when he was again ordered to duty afloat as Executive Officer of USS Truxtun, then operating with Destroyer Division 27, Destroyers, Battle Force. He next had duty in connection with fitting out the destroyer Meredith, at the Boston Navy Yard, Boston, Massachusetts. He went aboard as Executive Officer at her commissioning, March 1, 1941, and continued serving in that capacity after the United States entered World War II in December 1941, while the Meredith was on convoy and patrol duty from a base in Iceland.

In March 1942 he was in temporary command of USS Wainwright, operating in the Atlantic, and was assigned shore duty at the Naval Academy in April 1942. There he served in the Executive Department as Third Battalion Officer and Assistant to the Commandant of Midshipmen. Early in the fall of 1944 he assumed command of the destroyer Barton, the first ship of its class to be built. Under his command, the Barton a unit of the Seventh Fleet, participated in the Ormoc Bay (Leyte) landings during the nine-hour period of concerted suicide plane attacks on December 7, 1944, and later in the landings at Mindoro Island and Lingayen Bay, which resulted in breaking Japanese resistance in the Philippines by General of the Army MacArthur’s forces.

The Barton then joined carrier forces of the Fifth Fleet to participate in the surprise blow launched against Tokyo on February 16, 1945. She was one of the ships that moved to within one hundred miles of the Japanese city for that strike, which resulted in the great damage to enemy installations, She had another big change to prove her reliability in the Okinawa Campaign. One of the first ships to arrive, a week before the scheduled landings, she fought it out with Japanese suicide planes and high speed boats, and as fire support ship, her guns firing on a 24-hour schedule for many weeks, she assisted the ground forces while pouring deadly fire into all enemy installations.

The USS Barton was awarded the Navy Unit Commendation for “outstanding heroism in action as a Fire Support Ship and as Radar Picket Ship during the Okinawa Campaign, from March 21, to June 30, 1945….” The citation continues: “A natural and frequent target for heavy Japanese aerial and submarine attack while operating off Okinawa, the USS Barton defeated all efforts of the enemy to destroy her….With her own gunfire, she downed four hostile planes, assisted in the destruction of four others and sank one enemy midget submarine. A gallant, fighting ship, the Barton, her officers and her men withstood the stress and perils of these hazardous missions and provided effective Naval gunfire support for our ground operations on Okinawa, achieving a distinctive combat record which attests the teamwork, courage and skill of her entire company and enhances the finest traditions of the United States Naval Service.”

For outstanding services as Commanding Officer of the USS Barton during operations at Leyte, Luzon, and Okinawa, Rear Admiral (then Commander) Dexter was awarded the Silver Star Medal, a Gold Star in lieu of a second Silver Star Medal, the Bronze Star Medal, and the Legion of Merit, with Combat Distinguishing Device “V.” The citations follow in part:

Silver Star Medal: “For conspicuous gallantry and intrepidity as Commanding Officer of the USS Barton, in action against enemy Japanese forces in Ormoc Bay, Leyte, Philippine Islands, December 7, 1944. Operating in support of out landing troops, (he) fought his ship with a high degree of skill and courage and, delivering accurate fire on enemy shore defenses and attacking enemy aircraft, contributed materially to the success of our forces in the area….”

Gold Star in lieu of Second Silver Star Medal: “For conspicuous gallantry and intrepidity as Commanding Officer of the USS Barton in action against enemy Japanese forces during the assault on Lingayen, Luzon, Philippine Islands, from January 3 to 18, 1945. Although constantly subjected to persistent and dangerous hostile bombing and suicide plane attacks and to fire from enemy shore and surface batteries, (he) skillfully directed his ship in bombarding Japanese shore positions, in performing anti-aircraft and anti-submarine screening duties, in destroying enemy surface craft and in providing anti-aircraft and shore fire support of minesweeper units in this area….”

Bronze Star Medal: “For heroic achievement as Commanding Officer of a United States destroyer in Western Pacific waters in connection with operations against the enemy on the night of 17-18 February 1945. On this night his ship participated in a surface engagement with three enemy ships in which all of the enemy were destroyed. His alertness and professional skill contributed materially to the success of this engagement and his performance was at all times in keeping with the highest traditions of the United States Naval Service.”

Legion of Merit: “For exceptionally meritorious conduct in the performance of outstanding services to the Government of the United States as Commanding Officer of the USS Barton in action against enemy Japanese forces during the invasion of Okinawa Jima from March 21, to May 20, 1945…..An able leader, he directed his ship in shooting down three hostile planes, in destroying two suicide boats and probably an enemy midget submarine and in conducting radar countermeasures…..”

In June 1945 he assumed command of Destroyer Division 100, which served first on the famed “picket” station off Okinawa, later with Fleet Admiral Halsey’s Third Fleet carrier forces which bombed and shelled the Japanese homeland during July and early August 1945. This division entered outer Tokyo Bay with the first ships in the historic event which ended the Japanese 2,600-year old myth of invincibility, and for two months assisted in patrol and demilitarization duties in Eastern Japan.

Returning to the United States in November 1945, and following temporary duty in the Office of Public Information, Twelfth Naval District, San Francisco, California, he was placed in charge of the Public Information Office, Thirteenth Naval District, Seattle, Washington, where he served from April until September 1946. On October 1, 1946 he reported for duty in the Office of Public Relations, Navy Department, Washington, DC. There he served as Assistant Director, and later Deputy Director of Public Information until retired at his own request after over twenty years of service in the Navy, on March 1, 1949.

Recalled to active duty on August 8, 1951, he is now serving with the Military Sea Transportation Service, as Atlantic Navy Control of Shipping Officer, Brooklyn, New York.

In addition to the Silver Star Medal with Gold Star, the Legion of Merit with Combat “V,” the Bronze Star Medal, and the Ribbon for the Navy Unit Commendation to the USS Barton, Rear Admiral Dexter has the Yangtze Service Medal (USS Houston); the American Defense Service Medal, Fleet Clasp (USS Meredith); the European-African-Middle Eastern Campaign Medal; the Asiatic-Pacific Campaign Medal; the Philippine Liberation Ribbon; and the World War II Victory Medal.

Rear Admiral Dexter’s early ancestor, George Dexter, settled Cape Cod in 1629. His father, Edwin Grant Dexter, PhD., LL.D., was Commissioner of Education, Puerto Rico, in 1907-1911; Reactor of the National Institute of Panama City in 1911-1918; and as a Major in the Red Cross, served in Russia and the Balkans during World War I, 1918-1919. He has written “History of Education,” and “Weather Influences.”