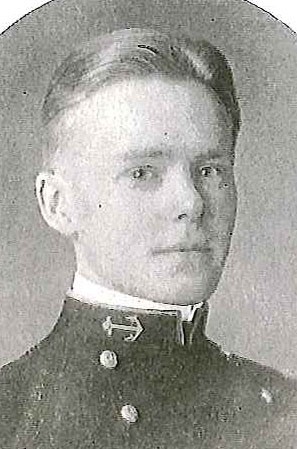 Wadleigh Capehart was born on September 3, 1888, in Portsmouth, New Hampshire. He entered the US Naval Academy, Annapolis, Maryland on appointment of the President (at large) on May 5, 1906, and was graduated on June 3, 1910. After two years’ service at the sea as a Passed Midshipman (then required by law before commissioning) he was appointed Ensign on March 7, 1912. He attained the rank of Captain to date from February 13, 1939, and was transferred to the retired List of the Navy in that rank on July 1, 1939.

Upon graduation from the Naval Academy in June 1910, he was assigned to USS Minnesota, and served in that battleship until November 1913, during which time he received his commission as Ensign in 1912. After duty in connection with fitting out USS Parker, he joined that destroyer at her commissioning, December 30, 1913, and served aboard until May of the following year. Aviation instruction at the naval Aeronautic Station, Pensacola, Florida, and the works of Burgess Company, Marblehead, Massachusetts, preceded training aboard USS North Carolina, one of the first aviation training ships from July 1914 to January 1915, with temporary additional duty during that period in the Office of Naval Aeronautics, Navy Department, Washington, DC.

Returning to Naval Aeronautic station in Pensacola, he completed instruction, was designated Naval Aviator (heavier than-air) on September 19, 1915, and remained there for duty until June 1916. For three months thereafter he was Assistant to the Inspector of Engineering Material for Aeronautics, Custom House, Boston Massachusetts, with additional like duty in other places. In September he reported to the Works of the Curtiss Aero plane Company of Buffalo, new York, and served there prior to and following the United States country into World war I as Inspector of Aeronautic Material.

He continued duty there until after the Armistice, and on January 29, 1919 reported to Brest, France, for passage to the United States. Following a month duty in the Office of the Chief of Naval Operations, Navy Department, he was sent to Brazil where he served until December 1919 with the Brazilian Government at Rio de Janeiro in an advisory was largely due to his efforts.”

In January 1920 he had temporary duty in the Bureau of navigation, Navy Department, after which he served until September 1921 as a Member of the Board of Inspection and Survey, navy Department, with brief additional duty as Navy Member of the Board of Surveys and maps. Eight months duty in the Bureau of Aeronautics preceded sea duty from May 1922 until June 1924 with Air Squadrons, Atlantic Fleet (title changed in December 1922 to Aircraft Squadron, Scouting Fleet).

Following instruction for a year at the Naval war College, Newport, Rhode Island, he served as Executive Officer of the Naval Air Station, San Diego, California, until July 1926. For three months he served with Aircraft Squadrons, Battle Fleet, aboard USS Langley, and after brief temporary duty in the Bureau of Aeronautics he reported in November 8, 1926 to the Bethlehem Shipbuilding Corporations, Quincy, Massachusetts for duty in connection with fitting out the aircraft carrier Lexington. He assumed command in November 1927 of torpedo Squadron 9-S, based on USS Wright, operating with Aircraft Squadrons, Scouting Fleet.

A tour of duty from June 1929 to June 1932, in the Bureau of Navigations, Navy Department, preceded sea duty for a year as Navigator of USS Saratoga. From August 1933 until 1934 he commanded Utility Wing of Aircraft Squadrons, based on USS Wright, and returned to the West coast for a tour of duty as Executive Officer of the Naval Air Station at San Diego, California.

During the period November 1936 to June 1938 he served as Executive Officer of USS Lexington, and after two months instruction at Headquarters, Eleventh naval District, San Diego, California, reported in August to the Fleet Air Base at San Pedro, California, for duty in command. He was relieved of all active duty and transferred to the Retired List of the Navy on July 1, 1939.

In June 1940 he was recalled to active duty, and in August of that year reported to the Brewster Aeronautical Corporation, Long Island City, New York, as Inspector of Naval Aircraft. He served there until June 1944, with additional similar duty during most of that period with the Aircraft Corporation, College Point, New York, and as Executive Assistant to the General Inspector of Naval Aircraft, Eastern Division. For three months he was in command of the Naval Air Station, Cape May, New Jersey, and the Naval Air Base there, and in September 1944 was designated Commander, Naval Air Bases, Fourth Naval District, with additional duty in command of the Cape May Naval Base. He was again relieved of all active duty on March 7, 1946.