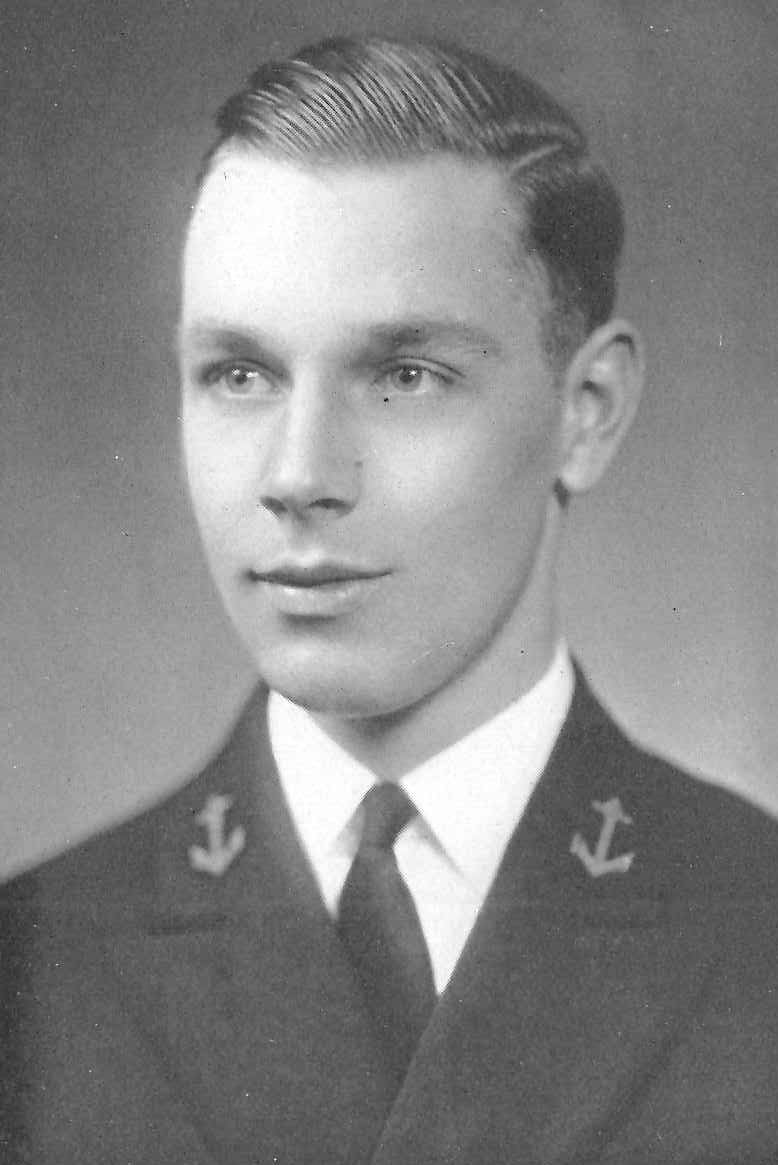 Thomas Slack Baskett was born in St. Louis, Missouri, on September 4, 1913, son of Thomas South Baskett and Mrs. (Minnie Frances Slack) Baskett.  He attended Hamilton School in St. Louis and Bristol Grammar and Webster Groves High School in Webster Groves, Missouri before his appointment to the US Naval Academy in 1931.  Graduated and commissioned Ensign on June 6, 1935, he subsequently advanced to the rank of Captain, with date of rank October 1, 1953.

After graduation from the Naval Academy he served for a year as a junior officer in the battleship Pennsylvania, then flagship of Commander in Chief, US Fleet.  He remained at sea until December 1938, assigned to Gunnery, Commissary and Communications duties on board the USS Aaron Ward and USS Wasmuth, destroyers of the Battle Force.  From January through May 1939 he was a student at the Submarine School, New London, Conn., then joined the USS S-44, which served in the Southwest Pacific Area during the early months of World War II.  He had various duties on board the S-44, including Torpedo Officer, Communications Officer, Engineer, and finally Executive Officer.

The USS S-44 won the Navy Unit Commendation for heroic service in the Solomon Islands Area from May 12 to August 10, 1942; and he was personally awarded the Silver Star Medal with citation, in part, as follows: “For conspicuous gallantry and intrepidity as Executive Officer of the USS S-44 during the First and Second War Patrols of that vessel in enemy Japanese-controlled waters of the Southwest Pacific Area from April 24 to July 5, 1942.  Responsible for organizing and training the fire control party to a high degree of combat efficiency, Lieutenant Baskett was of invaluable assistance to his commanding officer in making aggressive torpedo attacks which resulted in the sinking of a converted gunboat and a converted salvage vessel…(He) contributed to the success of each patrol and to the safe return of the ship…”

In July 1942 he assumed command of the USS S-37 and made one War Patrol in the Solomons, one in the Gilberts.  In February 1944 he joined the USS Tautog as Prospective Commanding Officer, later assuming command of that submarine which also was awarded the Navy Unit Commendation for heroic service in the Southwest Pacific Area.  Captain (then Lieutenant Commander) Baskett was awarded the Navy Cross, a Gold Star in lieu of the Second Silver Star Medal, and the Bronze Star Medal, with citations to follow:

Navy Cross: “For extraordinary heroism as Commanding Officer of the USS Tautog, during a War Patrol of that vessel in enemy Japanese-controlled waters of the Pacific, from April 17 to May 21, 1944.  Despite adverse weather conditions and enemy aerial opposition, (he) maneuvered his vessel through strong enemy escort screens to launch repeated torpedo attacks and sink four hostile freighters totaling over 20,000 tons.  Although severely depth-charged, he skillfully evadaded the enemy and brought his ship safe to port…”

Gold Star in lieu of Second Silver Star Medal: “For conspicuous gallantry and interepidity as Commanding Officer of a United States Submarine in action against enemy Japanese shipping in the Pacific War Area.  Operating in rough seas and confined waters, (he) conducted aggressive attacks to sink more than 8,000 tons of enemy shipping, thereby contributing materially to the success of the War Patrol.  His skillful tactics enabled him to return his ship safe to port…”

Bronze Star Medal (with Combat “V”): “For meritorious achievement as Commanding Officer of the USS Tautog, during the Twelfth War Patrol of that vessel in enemy Japanese-controlled waters from June 23 to August 10, 1944.  Skillfully directing his ship, (he) launched two torpedo attacks to sink two enemy ships totaling 4,000 tons and, during two gun engagements against a hostile trawler and a small coastal steamer totaling 300 tons, succeeded in sinking both…(and) returning his ship to port undamaged…”

During the remaining months of the war, and until January 1946, he commanded the USS Tench in the Pacific, and later brought her to the Atlantic.  “For extraordinary heroism (in that command) in the vicinity of Nanpo Shoto from May 12 to June 17, 1945…” he was awarded a Gold Star in lieu of the Second Navy Cross.  The citation further states: “(He) directed his ship in carrying out daring torpedo and gun attacks which resulted in the sinking of four hostile ships and five small craft, for a total of 16,000 tons.  Skillfully evading determined Japanese countermeasures, he succeeded in bringing his ship safe to port…”

He was also awarded a Gold Star in lieu of the Second Bronze Star Medal, with citation as follows: “For meritorious service in connection with operations against the enemy as Commanding Officer of the USS Tench during a war patrol of that vessel.  His aggressive and determined attacks with both gunfire and torpedoes resulted in the sinking of over 1,000 tons of enemy shipping, including numerous small craft.  He skillfully evaded all enemy countermeasures and brought his ship safely back to port…”

From January 1946 to July 1947 he commanded the submarine Dogfish in the Atlantic, and during the next three years served as Anti-Submarine Warfare Officer on the Staff of Commander in Chief Naval Forces, Eastern Atlantic and Mediterranean.  With his pennant in the USS Razorback, he commanded a Submarine Division from July 1950 until October 1951, and from January through May 1952 was Commanding Officer of the USS Huntington, a destroyer of the Atlantic Fleet.  A tour of duty in the Navy Department, assigned to the Office of Naval History, and as Aide to the Deputy Chief of Naval Operations (Logistics), was followed by instruction at the Industrial College of the Armed Forces, Washington, DC, from August 1954 to June 1955.

In July 1955 he assumed command of the USS Bushnell (AS-15), and after a year as Commanding Officer of that submarine tender he reported to Commander Naval Forces, Far East, as Assistant Chief of Staff for Operations and Plans.  Under orders of June 12, 1957, he was transferred to the Staff of Commander Naval Forces, Japan, for similar duty.  In 1958-1959 he commanded Sub Group, Western Pacific, then served on the Staff of the Industrial College of the Armed Forces.  On April 13, 1962, he was designated Superintendent of the Naval Observatory, Washington, DC.

In addition to the Navy Cross with Gold Star, the Silver Star Medal with Gold Star, the Bronze Star Medal with Gold Star and Combat “V,” and the Navy Unit Commendation Ribbon with Star, Captain Baskett received a Letter of Commendation, with Ribbon and “V,” for meritorious conduct as Commanding Officer of the USS S-37 during her Sixth War Patrol from August 17 to September 13, 1942.  He also has the American Defense Service Medal, Fleet Clasp; the American Campaign Medal; Asiatic-Pacific Campaign Medal; World War II Victory Medal; and the National Defense Service Medal.