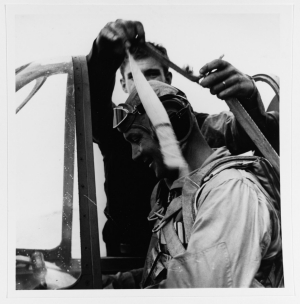 Albert Ogden Vorse was born in Philadelphia, Pennsylvania, on 9 August 1914, son of Albert O. and Emma (Yarnell) Vorse. He attended Phillips Academy, Andover, Massachusetts, before entering the US Naval Academy, Annapolis, Maryland, on appointment from the Nineteenth District of his native state in 1933. Graduated and commissioned Ensign on 3 June 1937, he subsequently progressed in rank to that of Captain, to date from 1 August 1955. On 1 January 1959 he was transferred to the Retired List of the US Navy and was advanced to the rank of Rear Admiral on the basis of combat awards.

Following graduation from the Naval Academy in 1937, he served on board USS Astoria until March 1940, after which he had training at the Naval Air Station, Pensacola, Florida. Designated Naval Aviator in December 1940, he joined Fighting Squadron THREE, operating from USS Saratoga. For outstanding services with that squadron he was awarded the Distinguished Flying Cross and cited as follows:

“For heroic conduct in aerial combat…when, on February 20, 1942, in enemy waters, he made vigorous and determined attacks, in the face of combined enemy machine gun and cannon fire against a formation of enemy heavy bombers, and he, with the assistance of his teammate, caused the destruction of one enemy bomber.”

He served as a Pilot with Lexington’s Air Group, between March and May 1942, and the next month joined the Air Group attached to USS Enterprise. He is entitled to the Ribbon for, and a facsimile of the Presidential Unit Citation awarded Enterprise and was personally awarded a Letter of Commendation, with authorization to wear the Commendation Ribbon and Combat “V”, and a Gold Star in lieu of the Second Distinguished Flying Cross. The citations follow in part:

Letter of Commendation: “For courageous conduct…as pilot of the USS LEXINGTON’s Air Group during action against enemy Japanese forces in the Battle of the Coral Sea, May 7 and 8, 1942…”

Gold Star in lieu of the Second Distinguished Flying Cross: “For heroism and extraordinary achievement…in aerial combat…in the Battle of the Coral Sea, on May 8, and again in the Solomon Islands Campaign on August 8, 22, and 24, 1943. In addition to shooting down two hostile dive bombers in the earlier action, Lieutenant Vorse, persistently leading his section in bold assaults against enemy aircraft over the Solomon Islands, pressed home his attacks with such relentless fighting spirit and aggressive courage that he shot down one Japanese dive bomber, one Zero fighter and one four-engine patrol plane…”

Returning to the United States, he reported in December 1942 as Training Officer at the Naval Air Station, Melbourne, Florida. In December 1943 he assumed command of Fighting Squadron EIGHTY, attached to USS Ticonderoga. “For meritorious achievement…as Leader of a Group of twenty Fighter Planes…in action against enemy Japanese forces over the Philippine Islands on November 5, 1944…” he was awarded the Air Medal. The citation further states: “…Although five of his guns jammed while leading an attack against enemy aircraft, (he) succeeded in shooting down one hostile fighter. Continuing to press home a vigorous attack, he damaged another airborne craft and destroyed two planes on the ground…”

In January 1945 he became Commander Carrier Air Group EIGHTY, attached to USS Hancock and for service during the four months of his command was awarded the Navy Cross and the Silver Star Medal. The citations follow:

Navy Cross: “For extraordinary heroism…in action against enemy Japanese forces in the vicinity of Formosa, January 15, 1945. Skillfully leading eight fighter and thirteen bomber planes in a strike against enemy shipping, (he) broke through solid overcast at 2,000 feet and saw a large Terutsuki Class Destroyer below. Commencing his masthead attack amid extremely heavy antiaircraft fire, he released his 1,000 pound bomb and scored a direct hit on the ship which was seen to explode shortly afterwards. Although over six feet of his starboard wing was blown off by enemy fire, (he) completed his attack and successfully maneuvered his plane back to the Task Group where he was forced to make a difficult water landing…”

Silver Star Medal: “For conspicuous gallantry and intrepidity…in the vicinity of Tokyo, Japanese Empire, on February 16, 1945. Leading a formation of eighteen fighter planes on a sweep against enemy air forces and ground installations, (he) shot down four hostile aircraft and destroyed two more on the ground…”

He was also entitled to the Ribbon for, and a facsimile of the Navy Unit Commendation awarded the USS Hancock.

Prior to returning to the United States in January 1946, he had six months’ duty as Air Officer and Navigator on board USS Cabot. He served in the Office of the Deputy Chief of Naval Operations (Air), Navy Department, Washington, DC, until January 1948 and the next month became Executive Officer of Air Transport Squadron SIX, based at Guam, Marianas Islands. From August 1949 to July 1950 he had instruction at the Naval War College, Newport, Rhode Island, then reported as Administrative Officer at the Naval Air Station, Patuxent River, Maryland.

Between February and July 1952 he served on the Staff of the Commander in Chief, Naval Forces, Southern Europe (Logistics Section), headquartered at Naples, Italy. Returning to the Naval War College, he was a Member of the Staff until June 1956, then commanded the Naval Air Facility, Naha, Okinawa, until February 1957. After a period of hospitalization, he was assigned in July 1957 to Headquarters, Twelfth Naval District, San Francisco, California. He remained there until relieved of active duty pending his retirement, effective 1 January 1959.