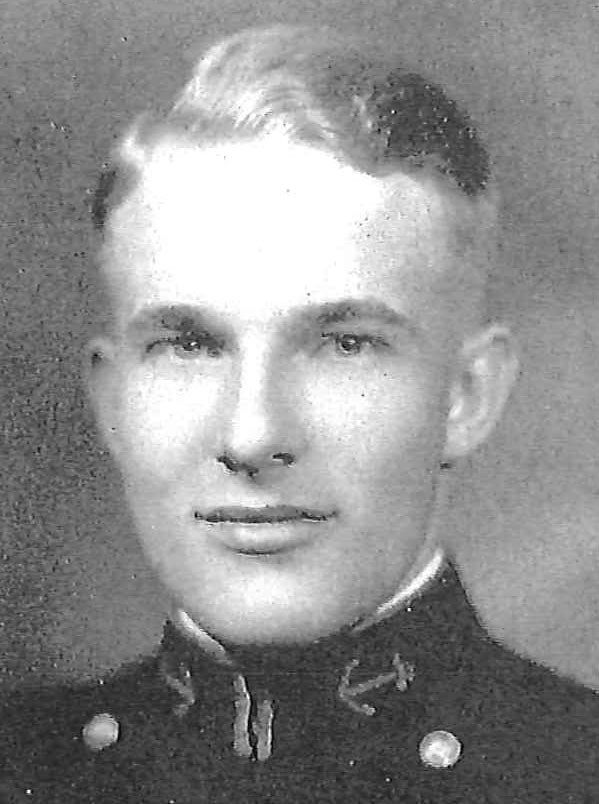 John Lester Chittenden was born in Massena, New York, on January 3, 1911, son of Lester A. and Jessie Reed Chittenden, both now deceased. He was graduated from Massena High School and entered the US Naval Academy on June 14, 1928, on appointment from New York. As a Midshipman he was Captain of the Varsity Basketball Team. Graduated with the degree of Bachelor of Science on June 2, 1932, he was commissioned Ensign in the US Navy from that date, and by subsequent advancement attained the rank of Captain, to date from January 1, 1951. On July 1, 1962 he was transferred to the Retired List of the Navy.

After graduation from the Naval Academy in June 1932, he was assigned to USS Colorado, in which he served as a junior officer in gunnery, communications and engineering on board that battleship until May 1034. He also served as Basketball Coach while aboard the Colorado, then a unit of Battleship Division 4, Battle Force. He next served for seven months as Communication Watch Officer on the staff of the Commander in Chief, US Fleet, in USS Pennsylvania, and later USS New Mexico, flagships.

From February 1935 until May 1936 he was a student Naval Aviator at the Naval Air Station, Pensacola, Florida, being designated Naval Aviator on May 1, 1936. He was detached with orders to the Aviation Unit of USS Quincy, and as a pilot on board that cruiser made the South American Good Will Tour before his detachment in June 1939. He next reported to Patrol Squadron 25 (later 23) based at Pearl Harbor, T.H., and was serving as Material, Navigator and Flight Officer of that Squadron when the Japanese bombed Pearl Harbor on December 7, 1941.

“Terminating a long and hazardous night patrol flight on August 7, Lieutenant Commander Chittenden courageously launched a lone dive-bombing attack against enemy installations, in Kiska Harbor, completing his assigned mission despite the fact that his craft was heavily iced. His expert skill and heroic devotion to duty throughout numerous search and patrol missions deep into hostile territory, executed both day and night in the face of the severest Alaskan winter weather, contributed greatly to the success of our operations this vital war area.”

He returned to the United States and from July 1943 until October 1944 was Commanding Officer of the Naval Auxiliary Air Station, Rodd Field, Corpus Christi, Texas. During the next five months he was a student at the Army-Navy Staff College, spending one month each at Orlando, Florida; Ft. Leavenworth, Kansas; and Newport, Rhode Island; and two months in Washington, DC. From April to June 1945 he served as Chief Staff Officer and Operations Officer to Commander Fleet Air Wing 15, based at Port Lyautory, French Morocco, and during the latter months of the war and until December 1946 served on the Staff of Commander Fleet Wing One. In the latter assignment h had seven months duty as Officer in Charge of the Landplane Detachment at Okinawa, and for the last eleven months was Operations Officer at Headquarters in China, Japan and Okinawa.

“For meritorious achievement as a Task Unit Commander of Fleet Air Wing One during operations against enemy Japanese forces in the Ryukyu Islands Area from June 26 October 15, 1945…” he was awarded the Bronze Star Medal with Combat “V”. The citation continues: “Faced with extremely difficult administrative and operational problems arising from inadequate facilities at a newly captured base, Commander Chittenden resourcefully administered his command, skillfully directing the activities of the search, photographic and torpedo squadrons assigned him and enabling them to attain an outstanding record in operations against the enemy. By his through advance preparations on two occasions, he served the aircraft of his command from suffering severe typhoon damage…”

Upon his return to the United States in December 1946 he was ordered to the Bureau of Aeronautics, Navy Department, where he served from February1947 until February 1950 as Head of the Maintenance Branch, Maintenance Division. A month later he reported to USS Roosevelt (CVB-42), in which he served for two months as Operations Officer and eleven months as Executive Officer. In April 1951 he assumed command of the Naval Auxiliary Air Station, Stanford, Florida, and after detachment in July 1953 was ordered to the Naval War College, New Port Island, where he was student for the 1953-1954 year.

He next served on the Staff of the Commander in Chief, Allied Forces, Mediterranean, and on October 4, 1956, was ordered to sea as Commanding Officer of USS Princeton (CVS-37). Under orders of December 5, 1957, he became Assistant Operations, Training and Plans Officer on the staff of Commander Naval Air Force, Pacific, later serving as Chief of Staff and Aide. On January 21, 1960, he was transferred to duty as Chief of Staff and Aide to Commander Carrier Division One. Reporting in October 1961 to the Bureau of Naval Personnel, Navy Department, he was assigned duty as Director, Naval Council of Personnel Board, Navy Department, and remained there until retired, July 1, 1962.