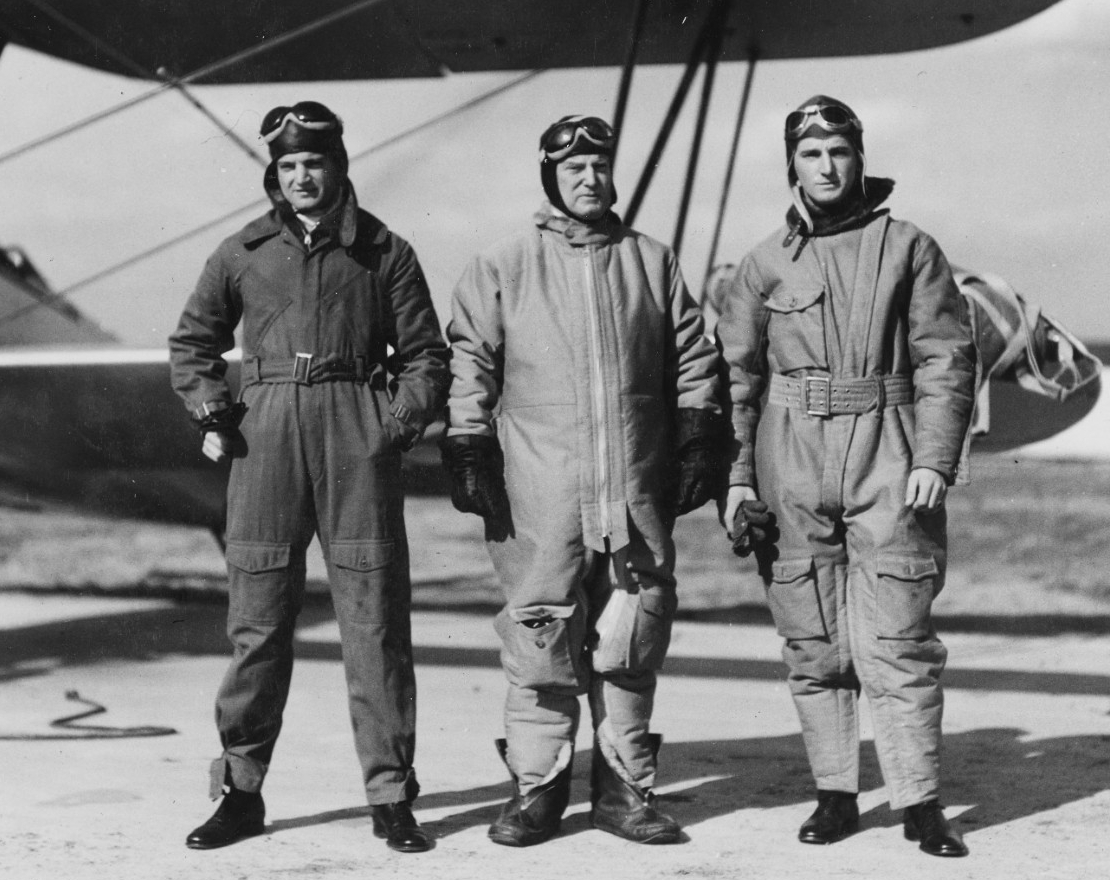 William Adger Moffett, Jr. was born on 16 April 1910, in San Francisco, California, son of Rear Admiral William A. Moffett, USN, and Mrs. (Jeannette Beverly Whitton) Moffett. He attended Culver Military Academy, Culver, Indiana, and Columbian Preparatory School, Washington, DC, before his appointment to the US Naval Academy, Annapolis, Maryland, by President Calvin Coolidge in 1926. As a Midshipman he was a member of the varsity boxing squad three years, and played class lacrosse, football and soccer. Graduated with the degree of Bachelor of Science and commissioned Ensign in the US Navy on 5 June 1930, he subsequently attained the rank of Captain, to date from 1 July 1949, having served in that rank (temporary) from 26 December 1945 until 1 December 1947. Upon retirement on 1 November 1959, he was advanced to the rank of Rear Admiral on the basis of combat citations.

January 1932, he was detached two months later, with orders to duty at the Naval Air Station, Hampton Roads, Virginia. In June 1932 he joined Scouting Squadron 3-B, later 3-S, attached to USS Lexington, and continued duty with that squadron until September 1933, except for five months' duty on board USS Gannet as a member of the Aleutian Islands Survey Expedition.

Serving next with Bombing Squadron 5-B in USS Ranger, he was detached in June 1935 to the Naval Air Station, Anacostia, DC, where he served in the Operations Department. From June 1937 until December 1938 he was assigned to Observation Squadron 4-B, attached to USS Maryland, after which he served with Observation Squadron 2. In June 1940 he reported for duty at the Naval Air Station, Norfolk, Virginia, remaining there until December 1941, when he joined Patrol Squadron 51 as Executive Officer. The Squadron was later redesignated Bombing Squadron 101 and he became Commanding Officer. He was awarded the Air Medal and the Distinguished Flying Cross, with citations, in part, to follow:

Distinguished Flying Cross: "For heroism and extraordinary achievement...as Commanding Officer of Bombing Squadron ONE HUNDRED AND ONE in action against enemy Japanese forces in the Solomon Islands Area from 1 January to 1 September 1943. Braving intense enemy opposition, Commander Moffett led his squadron in numerous daring bomber strikes, patrols and reconnaissance missions against the enemy, there-by contributing materially to the success of these vital operations..."

Air Medal (for previous act.) "For meritorious achievement in aerial flight...in action against enemy Japanese shipping off Kahili, Bougainville, Solomon Islands, February 14, 1943. Undeterred by heavy antiaircraft fire and a powerful enemy aerial formation which outnumbered his fighter escort four to one, Commander Moffett relentlessly pressed home his bombing strikes to inflict heavy losses on the enemy. By his leadership, flying ability and skilled combat tactics, he contributed essentially to the success of his squadron in shooting down nine enemy planes and in destroying a 6,500-ton Japanese cargo vessel..."

Upon his return to the United States, he was ordered to the Bureau of Aeronautics, Navy Department, Washington, DC, where he served from October 1943 until May 1945 in the Armament Division. In June 1945 he reported to USS Ticonderoga, and served as Executive Officer of that aircraft carrier for five months. He then was assigned to the Office of the Chief of Naval Operations, and in March 1946 was again assigned to the Bureau of Aeronautics. In September 1946 he became Assistant to the Vice Chief of Naval Operations, and served in that capacity until December 1947. Between January and June 1948 he was a student at the Armed Forces Staff College, Norfolk, Virginia, and following a course of instruction at the Naval War College, Newport, Rhode Island, he reported in April 1949 as Commander Tactical Air Control Group ONE. In August 1950 he assumed command of USS Floyds Bay, and after a year at sea was again assigned to the Bureau of Naval Personnel, this time in charge of the Aviation Liaison Section. In November 1953 he became Chief of Staff and Aide to Commander Carrier Division FIVE.

Admiral Moffett's father, Rear Admiral William A. Moffett, USN, Deceased, was Chief of the Bureau of Aeronautics from its organization in August 1921 until his death on 4 April 1933, in the crash of USS Akron, a dirigible, off Barnegat Light, New Jersey.