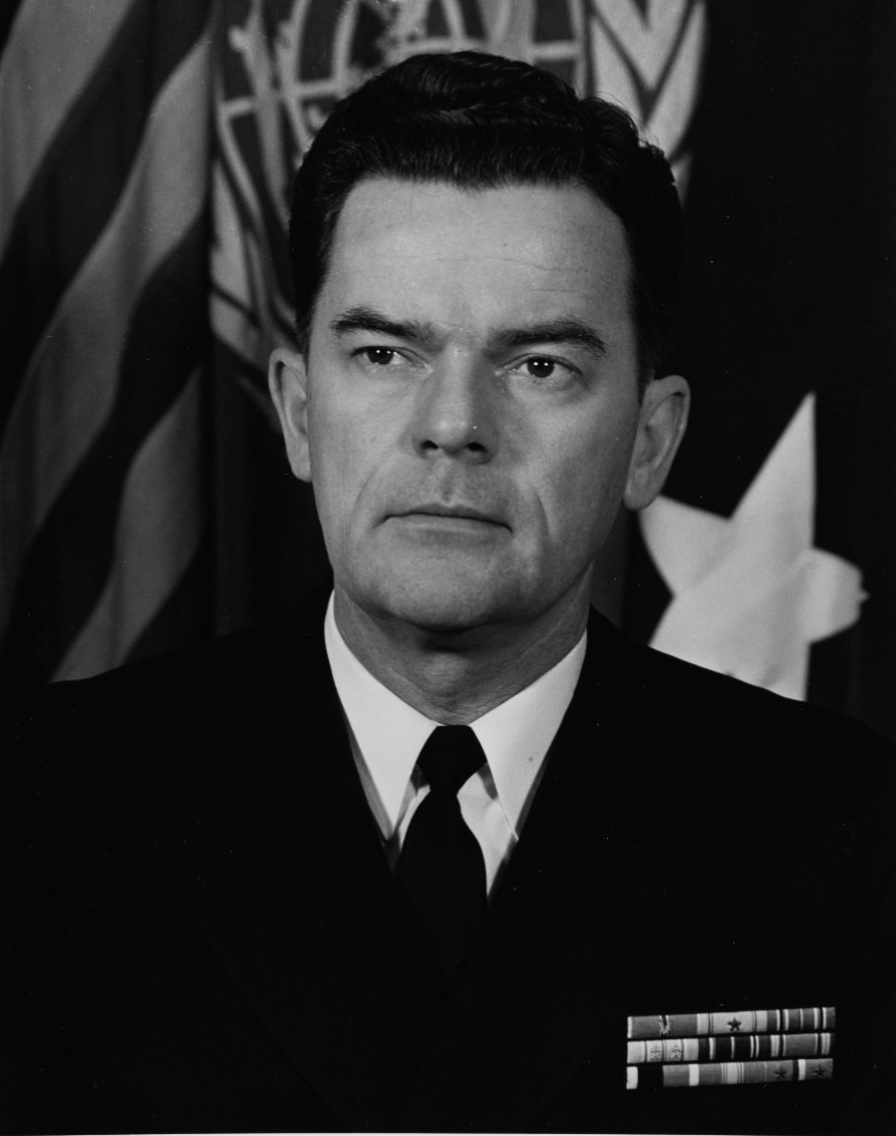 John Morris Alford was born in Galva, Illinois, on 13 April 1915, son of Dr. John Merlin Alford and Mrs. (Shirley Foote) Alford. He attended public schools in Galva and Marion Military Institute, Marion, Alabama, before his appointment to the US Naval Academy, Annapolis, Maryland, from his native state in 1932. As a Midshipman he was a member of the Lucky Bag Staff and Midshipman Regimental Commander in 1936. Graduated and commissioned Ensign on 4 June 1936, he subsequently attained the rank of Rear Admiral, to date 1 from October 1963.

After graduation in 1936, he was first assigned to USS Lexington, operating with Carrier Division ONE, Battle Force, in which he served two years as a junior officer. For a year thereafter he had communication duties on the Staff of Commander Battle Force, in USS California. In 1939 he joined USS Tennessee of Battleship Division TWO, Battle Force, for duty in the Gunnery Department, and in 1940 became Air Defense Officer of that battleship. He was on duty in that capacity, his ship at Pearl Harbor, when the Japanese attacked "Battleship Row" on 7 December 1941.

For a few months in 1942 he served as Aide and Flag Lieutenant to Commander Battleship Division TWO in USS Tennessee, and later that year was transferred to USS Alabama (commissioned in August 1942) for duty in the Gunnery Department. He served as Gunnery Officer of that battleship from April 1944 to the end of hostilities. During that period, the Alabama participated in the Gilbert Islands Operation; Raids on Truk, the Marianas Operation; the Okinawa Operation; and the Occupation of Japan.

He was awarded the Bronze Star Medal with Combat "V," "For heroic service as Gunnery Officer of the USS ALABAMA, in action against important enemy Japanese industrial installations in Hitachi, Honshu, Japan, on the night of July 17-18, 1945. Maintaining the Gunnery Department of his ship at a high level of efficiency and readiness, Commander Alford contributed materially to the heavy damage inflicted on enemy installations during the bombardment despite exceedingly adverse conditions..."

In August 1945 he had orders to additional temporary duty as Executive Officer of the THIRD Fleet Landing Force which went ashore at the Yokosuka Naval Base on 30 August, to assist in preparing that base for American Navy Occupation. He was detached from the Alabama in November 1945 for his first tour of shore duty since graduation from the Naval Academy.

After serving from December 1945 to October 1947 in the Bureau of Naval Personnel (Research Division), Navy Department, Washington, DC, he was ordered to command USS James E. Kyes. He assumed command of that destroyer in January 1948, and continued as her Commanding Officer until July 1949. In October of that year he joined the Staff of Commander SIXTH Fleet, and served as Fleet Gunnery and Training Officer, until July 1951.

He was next a student at the Armed Forces Staff College, Norfolk, Virginia, completing the course in February 1952, he then reported for duty in the International Affairs Division (now the Politico-Military Policy Division), Office of the Chief of Naval Operations. In 1954-1955 he commanded Destroyer Division ONE HUNDRED TWENTY TWO, and on 15 September 1955 was transferred to duty as Chief of Staff and Aide to Commander Destroyer Flotilla TWO.

After another tour of duty (1957-1959) in the Office of the Chief of Naval Operations, he attended the National War College, Washington, DC. Following graduation in June 1961, he next commanded Destroyer Squadron FIFTEEN. On 21 September 1962 he became Commander US Naval Forces, Korea and on 13 April 1964 reported as Assistant Chief of Naval Personnel for Plans, Bureau of Naval Personnel, Navy Department. In January 1965 he was transferred to the Office of the Secretary of Navy, Navy Department, where he served as Task Force Director, Navy Personnel Retention Policy Board. In March 1966 he reported as Chairman of the Education and Training Activities Study Group, Bureau of Naval Personnel and in May of that year assumed command of Cruiser Destroyer Flotilla TWO.

In July 1967 he became Deputy Commander of the Military Sea Transportation Service and Chief of Staff to the Commander of the Military Sea Transportation Service, with headquarters in Washington, DC. On 1 July 1969 he was transferred to the Retired List of the US Navy. He was awarded the Legion of Merit for the development of "mutual understanding" between leaders of the maritime industry and MSTS.