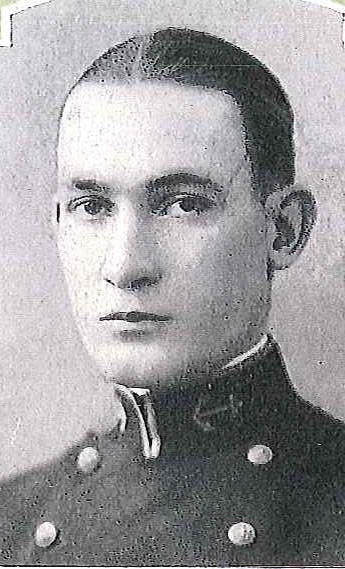 Charles Gordon DeKay was born in Laramie, Wyoming, on May 29, 1905, son of Mrs. Mabelle Land DeKay and the late Charles W. DeKay. He was graduated from University High School in Laramie, and attended the University of Wyoming, also located there, for two years prior to his appointment to the US Naval Academy, Annapolis, Maryland, in 1923. As a Midshipman he was Head Cheer Leader and a member of the Masqueraders and the Rifle Team. Graduated and commissioned Ensign on June 2, 1927, he subsequently advanced in rank attaining that of Rear Admiral in the Supply Corps of the Navy, to date from July 1, 1953.

After graduation from the Naval Academy in 1927, he served from June 1927 to June 1929 aboard USS California, flagship of the Battle Fleet. A year’s duty at the Puget Sound Navy Yard, Bremerton, Washington, preceded two years’ study, August 1930-June 1932, at the Harvard Graduate School of Business Administration, from which he received the degree of Master of Business Administration. During the period July 1932 to December 1934 he served at sea, with successive duty in USS John D. Edwards and USS Pope, destroyers of the Asiatic Fleet.

He reported in February 1935 to the Navy Department, Washington, DC for a tour of duty in the Purchase Division of the Bureau of Supplies and Accounts. From September 1938 until September 1940 he was Assistant US Naval Attache at the American Embassy, Paris, France, and during that time had additional duty in Berlin, Germany; The Hague, Holland; Rome, Italy; and London, England.

In October 1940 he joined USS San Francisco, and USS San Francisco, and was Supply Officer aboard that cruiser at Pear Harbor, Territory of Hawaii, when the Japanese attacked the Fleet on December 7, 1941. He remained on board while the San Francisco operated as a unit of Task Force VIII in the vicinity of Rabaul, New Britain, in February 1942 and later during the raid on the Gulf of Papua, off Port Moresby, Detached in April 1942, he returned to the Bureau of Supplies and Accounts for two years’ duty. He received a Letter of Commendation (with Ribbon) from the Secretary of the Navy for “outstanding performance of duty in the Bureau of Supplies and Accounts, as Officer in Charge of the Officer Personnel Division from May 23, 1942 until May 1, 1944…”

Returning to the Puget Sound Navy Yard in April 1944, he remained on duty there as Executive Officer of the Supply Department until March 1945, when he was ordered to the Naval Supply Depot, and Naval Supply Center at Pearl Harbor. There he served until July 1946 first, as Executive Officer and later as Supply Officer in Command. He entered the National War College, Washington, DC, as a student in August 1946, and completed the course in June of the next year.

Six months’ service as Special Assistant to the Paymaster General, Bureau of Supplies and Accounts, Navy Department, preceded an assignment from January 1948 as member of the Munitions Board, with duty in procurement and cataloging and as Director of the Munitions Board Catalog Agency. In February 1951 he was detached for duty in connection with logistics at the Supreme Headquarters Allied Powers, Europe.

His selection to the rank of Rear Admiral in the Supply Corps of the Navy was approved by the President on August 4, 1952, and in September, the same year, he became Executive Officer of the Naval Supply Depot, Mechanicsburg, Pennsylvania. He remained there until April 1953, when he reported as Assistant Chief of the Bureau of Supplies and Accounts and Chief of the Field Branch, Bureau of Supplies and Accounts, Cleveland, Ohio (redesignated in February 1955, Commanding Officer of the Navy, Finance Center, Cleveland, Ohio). He was Commanding Officer of the Naval Supply Center, Oakland, California from May 23, 1955 until October 1958, when he was assigned to the Twelfth Naval District with headquarters in San Francisco, California. He remained there until relieved of all active duty pending his retirement, effective December 1, 1958.