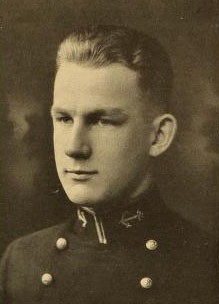 Joe Brice Cochran was born in New Hope, North Carolina, on February 6, 1904, son of the late John Brice and Allice (Walker) Cochran. He attended Huntersville (North Carolina) High School and Davidson College, Davidson, North Carolina, for one year prior to his appointment to the US Naval Academy, Annapolis, Maryland, from his native state in 1922. Graduated and commissioned Ensign on June 3, 1926, he subsequently advanced in rank, attainting that of Captain, to date from August 1, 1943. On July 1, 1956 he was transferred to the Retired List of the US Navy and advanced to the rank of Rear Admiral on the basis of combat awards.

Following graduation from the Naval Academy in 1926, he joined the USS New Mexico, and from the summer of 1927 until June 1929 served as Assistant Communication Officer on the staff of Commander Battleship Division Four, Battle Fleet, USS New Mexico, flagship. Returning to the United States, he had submarine training at the Submarine School, New London, Connecticut. Completing his instruction in December 1929, he had successive duty afloat until June 1933 in the submarines R-5, S-24 and R-2.

He attended a course in operating engineering at the Postgraduate School, Annapolis, Maryland, until June 1935, when he reported aboard the USS Bonita. In the fall of 1937 he transferred to the USS New York, continuing to serve in that battleship until June 1938, when he was again ordered to the Naval Academy, this time for duty as an Instructor in the Department of Marine Engineering. He remained there until April 1940, when he joined the USS Plunkett as Executive Officer. Detached from that destroyer in August 1941, he then assumed command of the USS Southard, and was commanding that vessel when the United States entered World War II, December 8, 1941. “For conspicuous gallantry and intrepidity…. (in that capacity)… in the Solomon Islands on August 7 and September 7-15, 1942…” he was awarded the Silver Star Medal. The citation continues in part:

“Participating in the initial attack as a screening and minesweeping vessel, the Southland… frequently re-entered the Guadalcanal-Tuglagi Area, despite persistent opposition by Japanese aircraft, in order to escort and protect vessels carrying reinforcement and supplies to the United States Marine forces established on the shore. Lieutenant Commander Cochran’s gallant fortitude and conscientious devotion contributed materially to the success of a vastly important mission…”

Relieved of command of the Southard in September 1942, he reported in November of that year as Commanding Officer of the USS Beale. He was awarded the Legion of Merit with Combat “V,” for “exceptionally meritorious conduct…. As Commanding Officer of the (latter)… during action against enemy Japanese forces in the New Guinea and Moluccas Areas from December 20, 1943 to September 20, 1944….” The citation continues in part:

“Launching his ship’s gun fire in support of landings at Cape Gloucester, the Admiralties, Hollandia, Wakde, Biak, Noemfoor and Morotai, (he) aided immeasurably in reducing the enemy’s power to resist and subsequently covered invasion operations, frequently under hostile air attack….. Captain Cochran was instrumental in furthering the sustained Westward advance of the Allied Force through this strategically important area.”

From September 1944 until March 1945 he served as Commander Destroyer Division Thirty Eight, and for “meritorious achievement (in that command)… in the South China Sea from January 9 to 20, 1945…” he was awarded the Bronze Star Medal with Combat “V,” The citations in part follows:

“Working tirelessly and effectively in the performance of his vital task, Captain Cochran rendered invaluable service during a series of highly successful fueling operations in support of the Third Fleet attacks on the enemy and, by his sound judgment, bold initiative and splendid corporations, contributed essentially to the effectively of his command in carrying out this important mission…”

In May 1945 he reported as Assistant Director of the Naval Research Laboratory, Washington, DC, and continued to serve as such for three years, assuming command in June 1948 of Destroyer Squadron Seventeen: Relived of that command in June 1949, the next month returned to the Naval Research Laboratory for duty as Director of Administration. He remained there until December 1951 when he became Commanding Officer of the USS Worcester. In January 1953 he was ordered to duty as Deputy Hydrographer, Hydrographic Office, Washington, DC, and in March of that year, was designated Hydrographer in command. He served in that capacity until relieved of all active duty pending his retirement from active service on July 1, 1956.