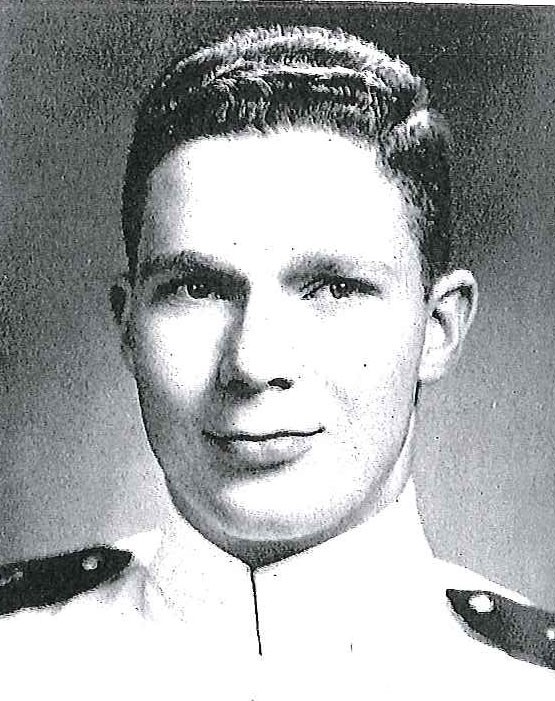 Ralph Herbert Carnahan was born in Pittsburgh, Pennsylvania on October 1, 1924, son of Dr. Donald S. Carnahan (now deceased) and Mrs. (Marion Barbara Stegall) Carnahan. He attended Carnegie Institute of Technology, Pittsburgh for a year, prior to entering the US Naval Academy, Annapolis, Maryland on appointment from his native state in 1943. He was graduated and commissioned Ensign with Class of 1947 on June 5, 1946 (accelerated course due to World War II). He subsequently advanced in rank to that of Rear Admiral, to date from April 1, 1974.

Following graduation from the Naval Academy in 1946, he joined USS Saidor (CVE-117) as First Division Officer and in July 1947 transferred as Seventh Division Officer on board USS Helena (CA-75). After instruction, July to December 1948 at the Naval Submarine School, Groton, Connecticut, he became Engineer on USS Grouper (SSK-214) and while in that assignment qualified in submarines (March 1950) and for command of submarines (April 1952). In April 1952 he was assigned to the Pre-Commissioning Detail of USS Harder, building at Electric Boat Company, Groton, Connecticut. He served as Engineer Officer of that submarine from her commissioning August 19, 1952 until June 1953.

He next was assigned as First Lieutenant and a member of the Physical Education Department at the US Naval Academy, Annapolis, Maryland and in July 1955 joined USS Gudgeon (SS-567) to serve as Navigator and Operations Officer. He transferred in June 1956 to USS Bass (SSK-2) for duty as Navigator and Executive Officer. During the period July 1957 to April 1958 he had training in advanced and operational nuclear power at the Nuclear Power School, New London, Connecticut, the Bettis Atomic Power Laboratory, Pittsburgh, Pennsylvania and the Nuclear Power Training Unit at Idaho Falls, Idaho. He was next assigned briefly to USS Skate (SSN-578), and while on board qualified as Engineer Officer of the Watch on nuclear power submarines.

In May 1958 he joined the Pre-Commissioning Detail of USS Skipjack (SSN-585), building at General Dynamics Corporation, Groton, Connecticut and upon the commissioning of that nuclear power submarine on April 15, 1959 assumed duty as Executive Officer and Navigator. From April 1960 to April 1961 he commanded USS Jallao (SS-368), after which he was Director of the Nuclear Power Department at the Naval Submarine School, Groton, Connecticut. In July 1962 he became the first Commanding Officer of the Naval Nuclear Power School, Naval Training Center, Bainbridge, Maryland. Following instruction in the Nuclear Reactors Branch, US Atomic Energy Commission, Washington, DC, April to August 1963, he reported as Head of the Nuclear Propulsion and Navigation Section of the Submarine Warfare Division, Office of the Chief of Naval Operations, Navy Department.

During the period January to April 1964 he had instruction at the Polaris Command Course, Dam Neck, Virginia and the Fleet Ballistic Missile Prospective Commanding Officer Corse, Naval Submarine School, Groton, after which he assumed command of the Blue Crew of USS Robert E. Lee (SSBN-601).  “For meritorious service and for his significant contribution to the success of the Polaris strategic deterrent force . . .” as Commanding Officer of the USS Robert E. Lee and later USS John Marshall he was awarded the Navy Commendation Medal.

From October to July 1969 he served as Deputy Director for National Security Council Coordination, Policy Planning Staff, International Security Affairs, Office of the Secretary of Defense, Washington, D. C. “For outstanding meritorious service. . .” in that assignment he was awarded the Meritorious Service Medal. The citation continues in part:

“… (He) played a key role in the development and coordination of Department of Defense positions in the National Security Council and its subordinate agencies, and in the performance of additional coordination duties spanning a wide spectrum of defense-related subjects. Instrumental in developing and expanding close working relationships with the Joint Staff and with other military and civilian agencies concerned with political-military questions, Captain Carnahan made major contributions to Department of Defense studies affecting current and future defense policies. . .”

While he was a student at the Air War College Maxwell Air Force Base, Montgomery, Alabama, August 1969 to August 1970, he also attended Auburn (Alabama) University, from which he received the degree of Master of Science in Political Science. He next joined the Staff of the Commander in Chief, Atlantic as Director of the Strategic Operations Branch in the Operations Division and “for outstanding meritorious service . . .” in that assignment was awarded a Gold Star in lieu of the Second Meritorious Service Medal. The citation states in part:

“Through his expertise in Strategic Force matters, he was instrumental in formulating command policy and positions on Polaris and Poseidon matters affecting national defense. In addition to developing new strategic planning and operational concepts, he prepared numerous studies on employment of Polaris and Poseidon Forces, developed operational techniques and recommended sound solutions for the most effective utilization and employment of CINCLANT strategic forces. . .”

He transferred in July 1971 to the Staff of Commander Submarine Force, US Atlantic Fleet and served as Chief of Staff and Aide until May 1972. “For exceptionally meritorious conduct . . .” in that capacity he was awarded the Legion of Merit. The citation follows in part:

“… Captain Carnahan conceived and supervised programs which led to improved management and operational efficiency of the Atlantic Fleet Submarine Force. His dedication and enviable professional ability were key factors in maintaining a sustained high state of submarine readiness. He made significant and lasting contributions to a number of important submarine-related efforts, including the development and deployment of new missile and torpedo weapons systems, improved submarine command and control, and assurance of continued high submarine survivability. . .”

In June 1972 he reported as Special Assistant to the Director of Navy Program Planning in the Office of the Chief of Naval Operations, Navy Department and in April 1973 became Deputy Director for Plans, Requirements and Technology, Defense Mapping Agency, Washington, DC.