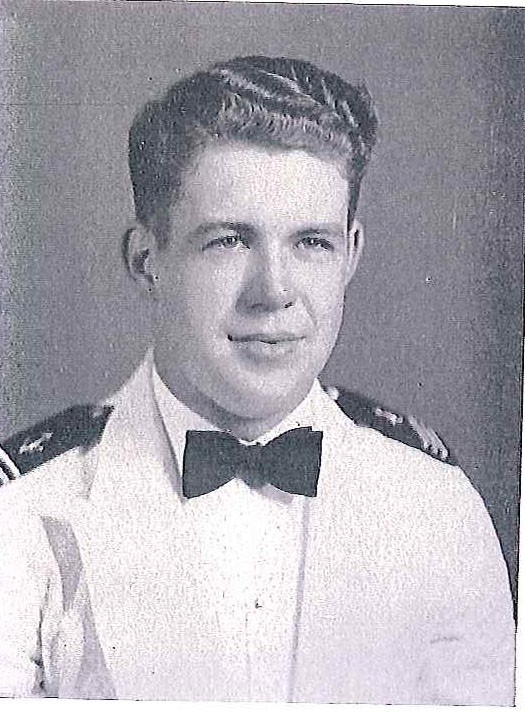 Ernest John Edmands was born in Andover, Massachusetts, September 30, 1917, a son of Mrs. Mary Caroline (Findley) Edmands and the late Ernest Carl Edmands. He attended Punchard High School in Andover, and in October, 1935 enlisted in the United States Navy as an appren- tice seaman. He was later assigned to the Naval Academy Preparatory Class, Naval Operating Base, Norfolk, Virginia, until his discharge inJuly, 1937 to enter the United States Naval Academy as a midshipman, upon appointment from Massachusetts.

He was graduated and commissioned Ensign on December 19, 1941 with the Class of 1942 following the entrance of the United State iinto World War II, and has advanced in rank to Lieutenant Commander to date from October 3, 1945. He joined USS Hughes at Pearl Harbor in February, 1942. That destroyer was a unit of the carrier striking force, operating with USS Yorktown in the South Pacific; covered striking movements of troops to New Zealand and Australia; and participated in early engagement, including Wake Island, Battle of Coral Sea, and the decisive Battle of Midway. In the latter, survivors of the stricken Yorktown were picked up, and the Hughes was ordered to stand guard during the night watch before she sank on June 7, 1942.

With the Hornet Task Group, the Hughes was engaged in action at Espiritu Santo; Guadalcanal; and the Battle of Santa Cruz, and with the Enterprise Task Group, in the bombardment of Kiska, Alaska; and later in the invasion of the Gilberts and Hollandia, New Guinea. When detached from the Hughes in August, 1944, he was assigned to the 11th Naval District, San Diego, California, temporarily before reporting in October to the Navy Yard. Washington, D. C., for instruction at the Ordnance and Gunnery School.The following March he had duty in connection with fitting out the USS Vogelgesang (DD-863) at the plant of Bethlehem Steel Company, Shipbuilding Division, Staten Island, New York. That destroyer was commissioned on April 28, 1945, attached to the Second Fleet, Atlantic, and he served on board six months on the East Coast from Maine to the Caribbean.

In October, 1945 he joined USS Hanson, and had duty as Executive Officer until February, 1947. The Hanson was converted to a picket destroyer and assigned to Destroyer Squadron 8, for duty in the Canal Zone. In March, 1947 he transferred to duty on the staff of the Commander in Chief, Atlantic Fleet, as Personnel and Administration Officer. In October, 1950 he assumed command of USS Carpellotti, high-speed transport. When relieved of his command in the summer of 1951 he is under orders to attend the command and staff course at the Naval War College, Newport, Rhode Island.