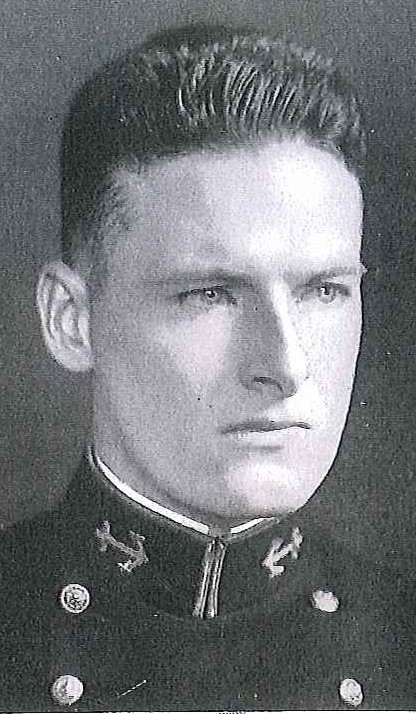 A native of Concord, Massachusetts, Joseph Paul Fitz-Patrick entered the Naval Academy in 1934, after a year’s entitled service in the US Naval Reserve. Graduated in 1938 his first assignment, which extended to September 1940, was in the cruiser Honolulu and later that year he completed training in submarines. In April 1941 he joined the submarine Barracuda, in which he was serving when the United States entered World War II, and remained on board until January 1943.

During 1946 and 1947 he was Flag Secretary to the Commander of the Atlantic Reserve Fleet, after which he commanded the submarine Dogfish. In July 1949 he was assigned to the Naval reserve Officers Training Corps Unit at Harvard University, Cambridge, Massachusetts as Associate Professor of Naval Science and Executive Officer and between May and August 1951 he was attached to the staff of Commander Cruiser Force, U.S. Atlantic Fleet and also served as Executive Officer of the NROTC Cruise Able.

After duty as Operations Officer and Chief Staff Officer on the staff of Commander Submarine Development Group Two, he commanded Submarine Division One Hundred Two for a year, July 1953-July 1954. Completing the course in comptrollership at George Washington University, Washington, D.C., he reported in June 1955 as Program Controller in the Naval Communications Division, Office of the Chief of Naval Operations, Navy Department. In February 1958 he was ordered to duty as Commanding Officer of the submarine tender Nereus.

Silver Star Medal: “For conspicuous gallantry and intrepidity in action as Commanding Officer of the USS Paddle during forces in the South China Sea Area from November 25, 1944, to January 18, 1945. Facing heavy gunfire from a strong force of screening destroyers, (he) close range, despite hostile countermeasures, and launched several torpedo attacks to sink a 10,000 ton tanker and inflict serious damage on an 800 ton destroyer. By skillful maneuvering he eluded efforts of the escort vessels to destroy his ships and retired her safe from the area…”

Bronze Star Medal (Combat “V”): “For heroic service as Assistant Approach Officer of the USS Paddle, during the Fourth War Patrol of that vessel in enemy Japanese-controlled waters, from June 5 to July 29, 1944. Skillfully performing his assigned duties during attacks, (he) aided in sinking one enemy vessel and in damaging another, thereby contributing materially to the success of the patrol…”

Gold Star in lieu of the Second Bronze Star Medal (Combat “V”); “For meritorious service as Commanding Officer of the USS Paddle during the Eighth War Patrol of that vessel in enemy Japanese-controlled waters of the East China and Yellow Sea Areas from May 15 to July 18, 1945. Availing himself of all possible contracts, (he) delivered five gun attacks which resulted in the sinking of a total of 850 tone of Japanese shipping, and skillfully evaded all enemy countermeasure…”