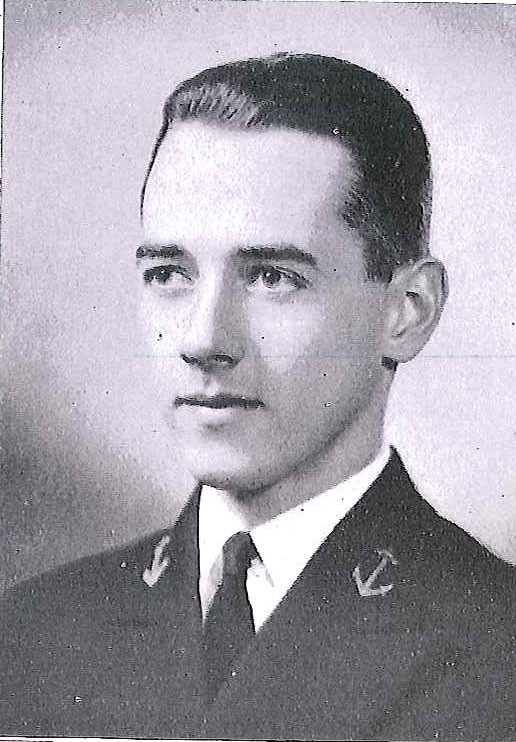 David Bonar Bell was born in Fargo, North Dakota, on November 16, 1913, son of Mrs. William B. (Clara Preston) Bell and the late Dr. Bell. He attended Central High School, Columbian Preparatory School and George Washington, University, all in Washington, DC, and while a student at the latter was a Fireman in a Naval Reserve Unit from November 1932 until June 1933. Entering the Naval Academy, Annapolis, Maryland, in June 1933, he was graduated and commissioned Ensign on June 3, 1937, and subsequently advanced in rank to that of Rear Admiral, USN, to date from October 1, 1964.

After graduation from the Naval Academy in June 1937, he was assigned briefly to USS Idaho, and from September of that year until June 1939 served as a junior officer in rotation, and “A” Division Officer of USS Colorado. He was on board USS West Virginia for four months, as Communications Watch Officer on the Staff of Commander Battleships, Battle Force, then from December 1939 until June 1940 was Signal Officer of USS Arizona.

He attended the US Submarine School, New London, Connecticut, from July through September 1940, and upon graduation was assigned to USS Cuttlefish, in which he served in Gunnery and Communications until December 1942, qualifying for Submarine Command in July 1942. “For extremely heroic and courageous conduct as Officer-of-the Deck of the USS Cuttlefish during a highly successful submarine was patrol which resulted in the sinking of the 29,600 tons of enemy shipping…” he awarded the Navy and Marine Corps Medal. The citation further states in part: “Constantly vigilant, Lieutenant Bell sighted a 19,600 tons enemy tanker during the mid-watch and expert maneuvering enabled the Cuttlefish to sink this valuable vessel…”

In January 1943, he reported to the Electric Boat Company, Groton, Connecticut, to assist in fitting out USS Pargo, and from her commissioning in May 1943 until February 1946 served on board, as her Engineer, Navigator, Executive Officer and Commanding Officer. The Pargo won the Unit Commendation “For outstanding heroism in action against enemy Japanese shipping and combatant units, during her Seventh War Patrol off the coast of Indo-China from January 15 to March 13, 1945…”

Silver Star Medal: “For conspicuous gallantry and intrepidity as Officer-of-the-Deck of the USS Pargo, during her First War Patrol in enemy Japanese-controlled waters. Alert and aggressive, (his) capable handling of situations as they developed greatly assisted his commanding officer in the sinking of 27,500 tons and the damaging of an additional 9,500 tons of enemy shipping…”

Gold Star in lieu of Second Bronze Star Medal: “For heroic achievement as Officer-of-the-Deck of the USS Pargo during her Second War Patrol in the vicinity of the Marianas Islands from October 30, to December 8, 1943. Constantly vigilant and alert, Lieutenant Commander Bell rendered invaluable assistance to his commanding officer in conducting attacks which resulted in sinking two enemy ships totaling over 17,500 tons and damaging two others totaling 5,700 tons…”

Gold Star in lieu of Second Silver Star Medal: “For conspicuous gallantry and intrepidity as Commanding Officer of the USS Pargo, during a War Patrol of that vessel from September 3 to October 7, 1944. Operating in waters under Japanese control, Lieutenant Commander Bell directed attacks which resulted in the sinking of an enemy freighter and in the damaging of a transport and freighter. On these operations, he frequently accepted the additional risk of shallow water and skillfully maneuvered his submarine in the vicinity of doubtfully charted shoals and reefs to press home attacks…(and) accomplished a very hazardous special mission…”

Gold Star in lieu of Third Bronze Star Medal: “For heroic service as Commanding Officer of the USS Pargo during (her) Sixth War Patrol in the enemy Japanese-controlled waters off the northwest coast of Borneo from October 28 to December 21, 1944. Forced to submerge after delivering an aggressive torpedo attack against an alerted hostile destroyer, (he) skillfully maneuvered his vessel during a severe depth-charging by the destroyer and a patrol boat, keeping damage to the Pargo at a minimum…On November 26, he courageously directed his submarine in an attack against a large tracker heavily guarded by air and surface escorts and succeeded in sinking the enemy vessel with four direct torpedo hits…(bringing) his submarine safe to port with only minor damage…”

Navy Cross: “For extraordinary heroism as Commanding Officer of the USS Pargo during the Seventh War Patrol of that vessel in enemy Japanese waters from January 19 to March 13, 1945…(He) directed his submarine in the sinking of valuable hostile shipping totaling approximately 15,000 tons, in conducting a three-day special mission which greatly assisted the Allied Navies in clearing the area of the enemy and in an extensive bombardment of shore installations on Woody Island in the Paracel Group…(and) brought his ship through two severe depth-charge attacks…”

He received a Letter Commendation, with Ribbon and Combat “V,” from the Commander in Chief, US Pacific Fleet, “For meritorious conduct in action…as Assistant Approach Officer of the USS Pargo during her Fourth War Patrol in the Celebes Sea from June 13 to August 9, 1945…”

After the cessation of hostilities he continued to command the USS Pargo until February 1946, and from March until June of that year commanded USS Trumpetfish. He then returned to Annapolis for instruction in Mechanical Engineering at the Naval Postgraduate School, and three years later was awarded the degree of Master of Science. He commanded USS Dogfish from June 1949 until June 1950, after which he served until February 1952 as Aide and Flag Secretary on the Staff of Commander Submarines, Atlantic.

A tour of duty as Submarine Detail Officer in the Bureau of Naval Personnel, Navy Department preceded further sea duty as Commander Submarine Division 62. In October 1955, he joined the Staff of Commander Operational Development Force, and from August 2, 1957 until July 1958 commanded Submarine Squadron SIX. He served on the Staff of Commander Submarine Force, Atlantic Fleet during the period July 1958 to August 1960, after which he had instruction at the National War College, Washington, DC. In July 1961, he assumed command of USS Waccamaw (AO-190) and in August 1962 became Commander Submarine Squadron FOURTEEN. He is entitled to the Ribbon for, and a facsimile of the Navy Unit Commendation awarded USS Proteus (AS-19). In July 1964 he reported as Deputy Chief of Staff and Deputy Chief of Staff for Plans, Policy and Operations to the Supreme Allied Commander, Atlantic and in July 1966 assumed duty as Assistant Chief of Naval Operations (Manpower), Navy Department (title changed on May 1, 1967 to Assistant Deputy Chief of Naval Operations (Manpower). “For exceptionally meritorious service from July 1966 to July 1968…” he was awarded the Legion of Merit. The citation further states in part:

“Providing outstanding leadership and managerial ability in monitoring the manpower requirements to support Southeast Asia contingency operations, (he) successfully directed the allocation of military manpower resources to provide optimal utilization throughout the Navy despite the strain of worldwide commitments. He provided inspiration, logic, and guidance in the development of new techniques and plans for improving the Navy’s capability to predict manpower requirements. With keen insight, he perceived the need for improvement in the statement of the Navy’s total manpower requirements and developed an innovative, but now accepted, concept for the standardization and validation of the manpower base…”

In July 1968 he reported as Deputy Commandant of the National War College, Washington, DC, and “for exceptionally meritorious service…(in that capacity) from July 1968 through June 1970…” was awarded the Distinguished Service Medal. The citation continues in part:

“Through his sound judgment, broad and scholarly background, and responsive management ability to integrate efficiently the multitude of course topics within the constraints of time available, Rear Admiral Bell was eminently successful in carrying out his responsibilities during this period. His initiative in engaging the services of distinguished guest lecturers from all sectors of society—provided an unexcelled variety of views and opinions for student appraisal and analysis. (He) directed and active faculty participation in these exchanges to insure a full exposure of all critical considerations bearing on the problem under study. His personal imitative, forthright expression and unstinting drive to find practical solutions based on available facts and logical evaluations contributed significantly to the student enthusiasm and motivation…Rear Admiral Bell rendered valuable and distinguished service and contributed greatly to the success and overall effectiveness of The National War College…”

Rear Admiral Bell is a member of Sigma Alpha Epsilon Fraternity and the Army and Navy Country Club, Washington, DC. While he was a Midshipman at the US Naval Academy, he was Captain of the Fencing Team (N*), was Regimental Sub Commande and 10th Company Commander.