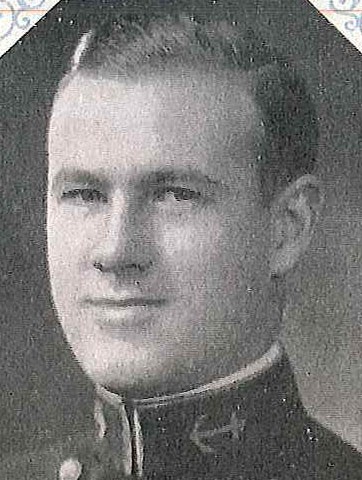 Sherman Wilcox Betts was born in Westwood, New Jersey, on October 6, 1909, son of Irving Wilcox and Bessie Harris (Boardman) Betts. He was graduated from Baldwin (New York) High School and during the period November 1926 to June 1927 served with the SEVENTY-FIRST Regiment of the New York National Guard. He entered the US Naval Academy, Annapolis, Maryland, on appointment from the First District of New York in 1927. As a Midshipman he was a member of the “B” squad in football; participated in boxing and baseball; and was on the staff of the “Lucky Bag.” Graduated and commissioned Ensign on June 4, 1931, he subsequent advanced in rank to that of Captain, to date from March 1, 1950.

Following graduation from the Naval Academy, he served until June 1933 in USS Marblehead, operating with Cruiser Division TWO, Scouting Force. He next had flight training at the Naval Air Station, Pensacola, Florida, and on March 22, 1934 was designated Naval Aviator. For two years thereafter he was attached to the aviation until of USS Indianapolis and from July 1936 to March 1937 had duty with Bombing Squadron ONE, based on USS Ranger. Continuing service afloat, he was Communications Officer and First Lieutenant on board USS Goff until June 1938.

Returning to Annapolis, he was a student at the Naval Postgraduate School and from August 1940 to March 1941 continued instruction at the Massachusetts Institute of Technology at Cambridge, from which he received the degree of Master of Science in Meteorology. He served for ten months as Aerological Officer on board USS Wasp and between January and December 1942 had similar duty on the staff of Commander SEVENTH Amphibious Force, Southwest Pacific. As such he participated in five amphibious assaults in the Southwest Pacific area.

“For exceptionally meritorious conduct…as Aerological Officer and Assistant Planning Officer on the staff of Commander SEVENTH Amphibious Force from June 30, 1943 to January 2, 1944…” he was awarded the Legion of Merit. The citation further states in part: “…Commander Betts skillfully assisted in the preparations and plans for our offensive activities and subsequently rendered invaluable service to the Naval Attack Force Commander during the execution of these essential operations against Woodlark-Kiriwina, Lae, Finschhafen, Arawe, Cape Glouscester and Saidor, on one occasion carrying out a hazardous advance scouting assignment and obtaining vital information necessary for the occupation of Kiriwina…(thus contributing) materially to the successful completion of numerous highly important missions.”

In April 1944 he reported as Aerological Officer at the Naval Air Station, Anacostia, Washington, DC, where he remained until June 1945. He then became Officer in Charge of the Fleet Weather Central, Guam. There he had duty in connection with typhoon reconnaissance, coordinating typhoon reconnaissance in the Western Pacific area in July 1945. He was a student, August 1948-January 1949, at the Industrial College of the Armed Forces, Washington, DC, after which he served as a member of the Petroleum, Oil and Lubricants Team, Joint Staff, Joint Chiefs of Staff, Washington, DC.

Assigned in August 1959 to the Bureau of Aeronautics, Navy Department, Washington, DC, he served until January 1960 as Head of Aerology Division. After the consolidation of that Bureau and the Bureau of Ordnance as the Bureau of Naval Weapons, he became Meteorological Management Officer. In June 1961 he transferred to the Office of the Chief of Naval Operations, Navy Department, where he is now Director of the Naval Weather Service. He is also Navy member of the Joint Meteorological Group of the Joint Chiefs of Staff and US member of the Committee on Maritime Meteorology of the World Meteorological Organization.

He is a member of the American Meteorological Society; Outrigger Canoe Club, Hawaii; and Kena Temple, A. A. O. N. M. S., Charleston Lodge No. 44, AF & AM.