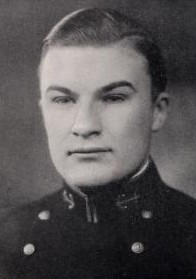 Burdette Eugene Close was born in Moravia, New York, on April 22, 1910, son of Howard Burdette and Sophie Clark (Ercanbrack) Close. He attended Moravia High School and The Manlius School, Manlius, New York, prior to his appointment to the US Naval Academy, Annapolis, Maryland, from his native state in 1928. As a Midshipman he participated in Class wrestling, and was a member of the Masqueraders, Choir, orchestra, and the Naval Academy 10 (dance band). Graduated and commissioned Ensign in June 2, 1932, he subsequently progressed in rank, attaining that of Captain, to date from January 1, 1951.

After graduation from the Naval Academy in 1932, he reported on board the USS Marblehead, to serve successively as Radio Officer Gunnery Officer and Assistant Navigator until May 1934. He was then ordered to the Naval Air Station, Pensacola, Florida, and on October 10, 1935 was designated Naval Aviator. The same months he joined Patrol Squadron Six, operating alternately from the USS Enterprise and USS Yorktown.

Between May and July 1938 he had instruction in bombsight at the Naval Proving Ground, Dahlgren, Virginia, after which he served for a year with Patrol Squadron Three (redesignated in July 1, 1939 Patrol Squadron Thirty Two). Later that month he transferred to Bombing Squadron Seven, attached to the USS Wasp and USS Ranger, and in June 1940 joined Patrol Squadron Seventy One, also operating from the USS Wasp. He continued duty in the Wasp from July to December 1941, when he was ordered to return to the United States.

He was next assigned as Field and Target Officer in the Operations Department at the Naval Air Station, Naval Operating Base, Norfolk, Virginia. In September 1942 he reported for duty in connection with Advanced Base Units, Atlantic Fleet (Operations Torch Allied landings in North and Western Africa), in the Office of the Vice Chief of Naval Operations, Navy Department, Washington, DC Two months later he became Assistant Operations Officer on the staff of the Commander Northwest African Sea Frontier and in February 1943 transferred in a similar capacity, to the staff of the Commander Moroccan Sea Frontier.

Returning to the United States in January 1944, he had fitting out duty in the USS Steamer Bay at the Kaiser Shipbuilding Company Vancouver, Washington. He reported on board that escort aircraft carrier as Executive Officer upon her commissioning, April 4, 1944. Detached from the Streamer Bay in July 1944, he joined the USS Matanikau as Executive Officer, and for twenty-two days while the Matanikau was being inactivated, he was in command. Between August 1946 and July 1949 he served as Executive Officer of Anti-Submarine Development Squadron One, after which he attended the Senior Course at the Naval War College, Newport, Rhode Island.

In July 1950 he reported as Assistant to the Head of the Supporting Plans Section, Strategic Plans Division, Office of the Chief of Naval Operations, Navy Department. He remained in that assignment until August 1952, at which time he reported for duty in connection with the establishment of Fleet Air, Eastern Atlantic and Mediterranean. Upon the establishment of that activity in September 1952, he became Chief of Staff to the Commander Fleet Air, Eastern Atlantic and Mediterranean. On March 18, 1955 he assumed command of the USS Currituck, and in October 1955 was ordered to duty as Commander Naval Air Bases, First Naval District, with additional duty as Commanding Officer of the Naval Air Station, Quonset Point, Rhode Island. Under orders of April 23, 1957, he was detached from command of the Naval Air Bases, and command of the Naval Air Station became his primary assignment.