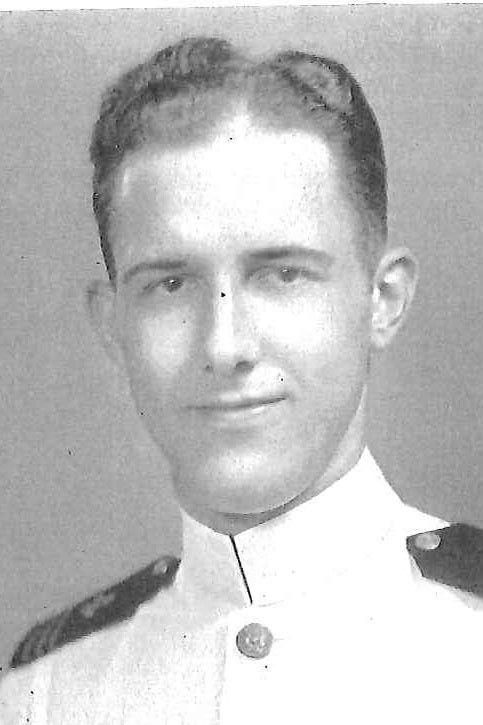 Herbert Arthur Cassidy, Jr., was born in East Glastonbury, Connecticut, on October 25, 1915, son of the Reverend H. A. Cassidy and Mrs. (Ethel B. Smith) Cassidy. He attended Mt. Union College, Alliance, Ohio, for two years, prior to entering the US Naval Academy, Annapolis, Maryland, on appointment from the state of Ohio in 1935. Graduated and commissioned Ensign on June 1, 1939, he subsequently advanced in rank to that of Captain, to date from July 1, 1958.

Following graduation from the Naval Academy in 1939, he joined USS Nevada and in August 1939 was detached for duty as Communication Officer on board that destroyer and was serving as such when the United States entered World War II, December 8, 1941. On April 25, 1942, the Sturtevant was sunk by a mine off Marquesas Key, Florida. He was awarded the Navy and Marine Corps Medal and cited as follows:

“For heroic conduct in rescuing shipmates from a flooded compartment of USS Sturtevant following an explosion which resulted in the sinking of that ship on April 25, 1942. Picking himself up after the explosion and determining that the main steam lines were completely ruptured, (he) ordered all engineering personnel topside. Remaining in the steam-filled engine room which was rapidly flooding, he assisted personnel to the desk, carrying three injured man to the ladder. The last man to leave this compartment, he made a through inspection of the engine room with the water then neck high. After reaching desk, he took charge of the rescue work in one of the firerooms and succeeded in removing a man from the wreckage…”

In December 1942 he joined USS Lardner as Gunnery Officer and in May 1943 became Executive Officer of that destroyer. While on board that vessel he participated in the consolidation of the southern Solomon Islands and in Operations in the Treasury- Bougainville and Bismarck Archipelago areas. Detached from the Lardner in February 1944, he next had similar duty on board USS John Hood, participating in the Kurile Islands operation. In March 1945 he assumed command of USS Smalley and for outstanding services in that destroyer was awarded the Bronze Star Medal and a Gold Star in lieu of the Second Bronze Star Medal, each with Combat “V”. The citations follow in part:

Bronze Star Medal:  “For heroic achievement as Commanding Officer of the USS Smalley during operations against enemy Japanese forces in the Western Pacific War Area from July 1 to August 22, 1945. Skillfully maneuvering his ship in Empire waters while on screen and picket assignments, (he) contributed materially to the success of antiaircraft and anti-submarine missions…”

Gold Star in lieu of the Second Bronze Star Medal: “For meritorious service… in action against enemy Japanese forces in the Pacific War Area from June 2 to 20, 1945. Serving with distinction during this prolonged period of hazardous operations, (he) ably command his ship on radar picket and area screening duties at Okinawa, participated in the antishipping sweep and bombardments of Omura and Chichi Jima and was a Unit of Task Force Thirty Eight during air strikes on the Japanese Homeland. In addition, he assisted in the rescue of survivors of USS William D. Porter while on radar picket station at Okinawa…”

Detached from command of the USS Smalley in June 1946, he next commanded USS Lansdowne and in December 1946 reported as Senior Instructor at the Gunfire Support School, Little Creek, Virginia. He remained there until June 1950 and the next month assumed command of USS Ingraham. He attended the Armed Forces Staff College, Norfolk, Virginia, from August 1952 to January 1953, after which he was assigned to the Training Division, Bureau of Naval Personnel, Navy Department, Washington, DC. In October 1955 he joined USS Wisconsin as Executive Officer and in August 1957 became Commander Destroyer Division Three Hundred Twenty Two.

Assigned in August 1958 to the Naval War College, Newport, Rhode Island, he was a student there until June 1959, then had duty on the Staff of that college, serving during 1960 and 1961 as Director of the Naval Command Course for Senior Foreign Officer. In August 1961 he reported as Chief of the Navy Section, Military Assistance Advisory Group, Norway, with headquarters is Oslo, where he remained until August 1963. The next month he assumed command of Destroyer Squadron Nineteen and in September 1964 was ordered detached for duty in the Joint Staff Office, Joint Chiefs of Staff, Washington, DC.