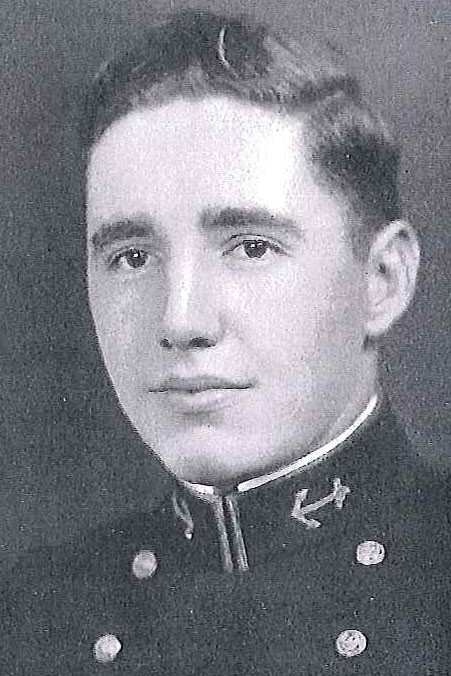 Harry John Patrick Foley, Jr., was born in Trenton, New Jersey, on June 7, 1916. He attended Immaculate Conception High School in Trenton and the Cochran-Bryan Preparatory School, Annapolis, Maryland. In April 1934 he enrolled as a Private in the 112th Field Artillery Regiment, New Jersey National Guard, but had not active duty before entering the US Naval Academy, Annapolis, Maryland on appointment from New Jersey on June 7, 1934. As a Midshipman he participated in boxing and fencing, and was Intercollegiate Epee Champion in 1938. He was graduated with the degree of Bachelor of Science and commissioned Ensign on June 2, 1938, transferred to the Supply Corps on July 19, 1940, and subsequently attained the rank of Rear Admiral on July 7, 1964, to date from June 1, 1965.

Following graduation from the Naval Academy, he was assigned to USS Quincy, a unit of Cruiser Division Seven, and for two years had general line duties. From August 1940 until March 1941 he was under instruction at the Naval Finance and Supply School, Philadelphia, and for a year thereafter served as Division Disbursing Officer for Destroyer Division Sixty-six.

He reported as Disbursing and Commissary Officer at the Naval Air Station, Coco Solo, Canal Zone, in May 1942 and in October of that year joined USS Lexington, in which he first served as Assistant Supply Officer and later as Acting Supply Officer. While on board that aircraft carrier he participated in seven major campaigns in the Pacific area: Pacific Raids, 1943; Gilbert Islands Operation; Asiatic-Pacific Raids, 1944; Western New Guinea Operations; Marianas Operation; Western Carolines Operation; and Leyte Operation. He is entitled to the Ribbon for, and a facsimile of the Presidential Unit Citation awarded the USS Lexington.

Returning to the United States in December 1944, he served throughout the remainder of the war as Aviation Material Officer on the Staff of the Chief of Naval Air Advanced Training, at Jacksonville, Florida. He reported in July 1946 as a student at the Naval War College, Newport, Rhode Island, and in June 1947 completed the course in Strategy and Tactics. For two years thereafter he served as Supply Officer in Command of the Aviation Supply Depot, Naval Supply Center, Pearl Harbor.

Assigned in August 1949 to the Navy Department, he served first as a Member of the Shore Establishments Survey Board, Office of the Chief of Naval Operations; and from April 1950 as Director of Supply in the Bureau of Aeronautics. In August 1953 he joined USS Coral Sea as Supply Officer, on the Staff of Commander Carrier Division Six. Detached from that aircraft carrier in July 1954, he next served as Director of Stock Control and Director of Advanced and Management Planning of the Aviation Supply Office, Philadelphia. In July 1958 he reported as Supply Officer at the Naval Air Station, North Island, San Diego, California.

In July 1960 he joined the Staff of Commander Naval Air Force, Pacific as Force Supply Officer and Comptroller and in January 1963 assumed command of the Naval Supply Depot, Seattle, Washington. In July 1964 he became Assistant Chief of the Bureau of Supplies and Accounts for Transportation and Facilities, Navy Department. Upon the reorganization of the Navy Department, effective May 1, 1966, he was designated Deputy Commander for Plans and Policy, with additional duty as Deputy Commander for Transportation, Naval Supply Systems Command. In June 1966 he reported as Commanding Officer of the Naval Aviation Supply Office, Philadelphia, Pennsylvania and “for exceptionally meritorious service . . . in that capacity was awarded the Legion of Merit. He assumed command of the Naval Supply Center, San Diego, California, in July 1970. He was awarded a Gold Star in lieu of a Second Legion of Merit for his “. . . superior management talents and inspirational leadership in providing exceptional resourceful and highly responsive logistic support to the numerous elements of the Fleet and Shore establishment in the San Diego area. . .” He served as such until relived of active duty pending his retirement, effective July 1, 1971.