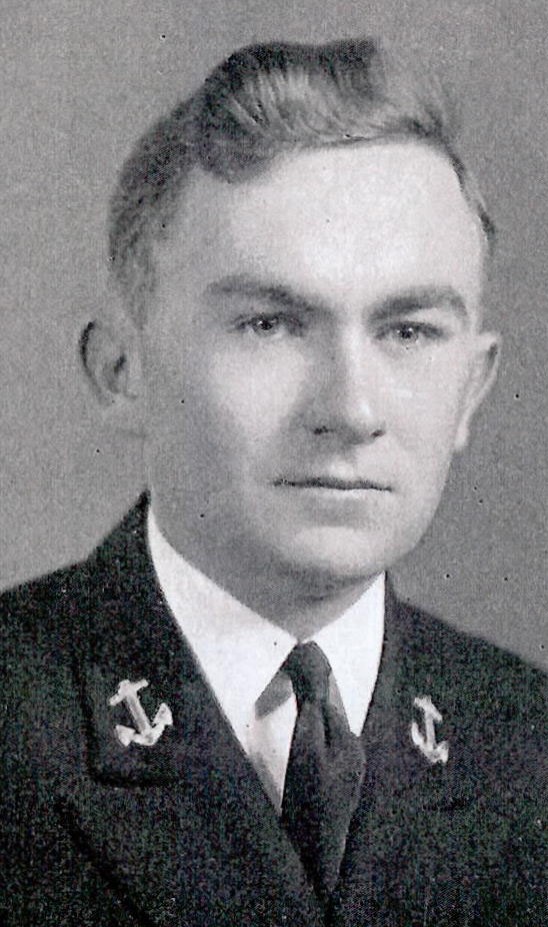 John Edward Casey was born in Philadelphia, Pennsylvania, on September 12, 1919, son of John F. and Mary F. (Cleary) Casey. He attended West Philadelphia High School and Villanova College, Villanova, Pennsylvania, before his appointment to the US Naval Academy, Annapolis, Maryland, in 1938. As a midshipman he was a member of the Battalion Tennis Team. He was graduated with the Class of 1942 on December 19, 1941, and commissioned Ensign from that date (course accelerated due to National Emergency), and was promoted to Lieutenant (jg) on January 26, 1943, and to Lieutenant, to date from October 1, 1943.

After graduation from the Naval Academy in December 1941, he reported to Headquarters, First Naval District, Boston, Massachusetts for temporary duty, and on February 9, 1942, joined USS Grayson, a new destroyer which escorted the Hornet and General Doolittle’s flyers on the Tokyo raid, and saw action at Tulagi, Guadalcanal area, on August 7, 1942. Lieutenant Casey was hospitalized until September 2, when he was discharged from the Naval Hospital, Mare Island, California. He served until February 1943 with Submarine Division 12, under instruction in submarine, had brief duty with Submarine Division 13, and continued instruction at the Submarine Base, New London, Connecticut.

In June 1943 he was ordered to the Electric Boat Company, Groton, Connecticut, to assist in fitting out USS Flier, and for duty on board at the commencement of building trails. Reporting on July 2, he continued duty on board that submarine from her commissioning in October 1943, until she was officially determined to be missing in action as of August 13, 1944, when she failed to return from a war patrol in the Philippine Islands area. Lieutenant Casey was presumed dead on January 19, 1946, under Section 5 of Public Law 490, as amended.

Lieutenant Casey was awarded the Silver Star Medal “For conspicuous gallantry and intrepidity as Fire Control Officer serving on board the USS Flier during her First War Patrol in the enemy-controlled waters of the Pacific Area…” The citation continues:

“Maintaining a steadfast watch as the Flier patrolled the vase expanses of her assigned sector, Lieutenant Casey provided timely and accurate data to the gun crews and greatly assisted in directing the boldly aggressive tactics of his valiant ship in her search for opportune targets. Resolute and determined throughout the relentless drive against Japanese surface units, he rendered invaluable service in numerous brilliantly executed surprise attacks which resulted in extensive damage to the enemy. By his outstanding professional skill and indomitable courage in the face of extremely perilous conditions, (he) contributed essentially to the destruction of four important Japanese vessels and to the serious damaging of two more, and his unwavering devotion to duty throughout upheld the highest traditions of the US Naval Service.”

In addition to the Silver Star Medal, Lieutenant Casey had the American Defense Service Medal, the Asiatic-Pacific Campaign Medal with two operation stars; the World War II Victory Medal; and the Purple Heart Medal (for wounds received in action).