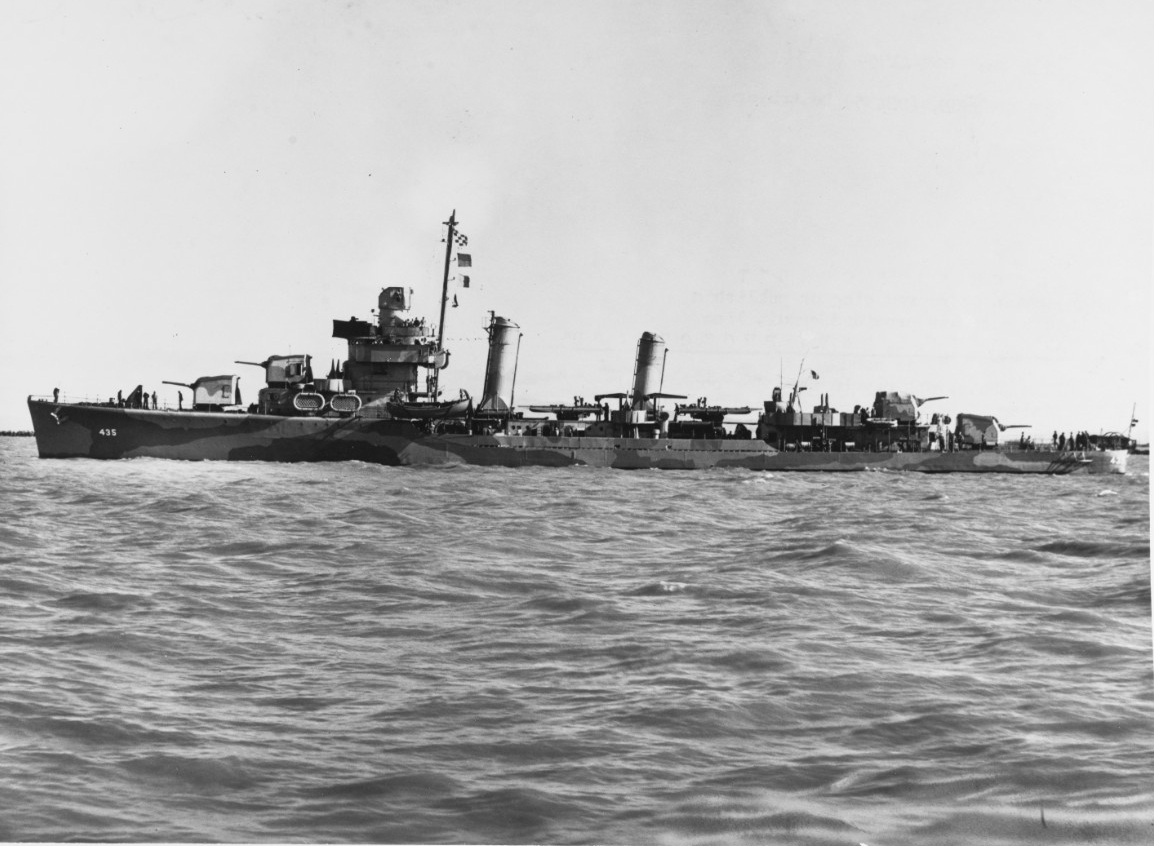 Grayson (DD-435) photographed circa 1942. This photograph has been retouched by the wartime censor to eliminate radar antennas atop the ship's foremast and gun director. Official U.S. Navy photograph now in the collections of the National Archives. Catalog#: 80-G-41759

Gary Travers Grayson was born in Culpeper, Va., 11 October 1878. After completing his medical studies, he was appointed Acting Assistant Surgeon, USN, 14 July 1903. A variety of posts led Grayson to Washington, where on 12 December 1912 he was assigned to the Bureau of Medicine and Surgery with additional duty as Aide to the White House. Commissioned Rear Admiral 29 August 1916, he served as personal physician and aide to President Woodrow Wilson during World War I. Before transferring to the Retired List 20 December 1928, Admiral Grayson received the Navy Cross for exceptionally meritorious service as aide and physician to President Wilson. He was also made Commander of the National Order of the Legion of Honor by the French government. Admiral Grayson served as chairman of the American Red Cross from 1935 until his death 15 February 1938.

After shakedown along the New England coast and in Chesapeake Bay, Grayson joined Destroyer Division 22 of the Atlantic Fleet. On 28 August the new destroyer became flagship of DesRon 11 operating in the Carribbean out of Guantanamo Bay. She reported for neutrality patrol in the North Atlantic waters between Newfoundland and Iceland 26 October.

After 10 months patrolling and protecting convoys in the icy North Atlantic, Grayson was ordered to the Pacific to join an American fleet battered but resolutely carrying the war to the enemy. She sailed from San Diego 2 April 1942 as part of Hornet's escort and rendezvoused at sea 13 April with Enterprise under Admiral William "Bull" Halsey. From this fast carrier force, steaming less than 800 miles from the Japanese home islands, Lieutenant Colonel "Jimmy" Doolittle launched his famed B-25 raid on Tokyo 18 April, bringing war to the enemy's own land.

The task group sailed into Pearl Harbor 25 April. Grayson departed almost immediately for repairs in California, but soon returned to the Pacific war.

Grayson again found herself with a fast carrier force as she sailed from Pearl Harbor 15 July to escort Enterprise and Hornet. Reaching Guadalcanal via Tongatabu 7 August 1942, the carriers launched their planes to cover Marine landings there, America's first major blow of the war on the road to Japan; and then operated in the area to block Japanese reinforcements. As they maneuvered off Guadalcanal, Enterprise was hit by Japanese bombs 24 August in an action-filled half-hour which saw Grayson down two planes and damage a third. The task group dispersed, Enterprise returning to Pearl Harbor for repairs, and Grayson joined TF 11, built around Saratoga under Admiral Fletcher. Action soon followed. Sighting a Japanese submarine on the surface the next day, 25 August, Grayson closed for the kill. After expending 46 depth charges, her entire supply, in a series of five attacks, the destroyer finally had the satisfaction of seeing a huge air bubble and oil slick rise to the surface indicating the death of another Imperial submarine.

The battle-proven ship and crew remained in the bitterly contested waters around Guadalcanal for nearly 8 months in a variety of duties. The versatile Grayson convoyed troop transports loaded with reinforcements from Noumea and other staging areas to Guadalcanal, patrolled in "The Slot", served as a radar picket ship, and performed valuable rescue work. On 18 October she picked up 75 survivors from, DD Meredith, sunk by serial torpedo 15 October, and helped escort the barge Vireo, loaded with desperately needed fuel and ammunition, to Guadalcanal.

Returning to Pearl Harbor 15 April 1943 for overhaul, Grayson continued on to the States for further repairs and finally sailed to New Caledonia, arriving 24 September. She accounted for at least four and possible two more Japanese barges loaded with evacuees from Kolombangara during three nights of action, 30 September-3 October, with DesRon 21 under Commander A. D. Chandler. After 3 months of patrol duty, Grayson sailed for Puget Sound Navy Yard 16 December for overhaul.

Grayson soon returned to the Pacific, putting in at Majuro Atoll, Marshall Islands, 10 February 1944. Patrol -duty in the Solomons, Carolines, and Marshalls occupied her the following 6 months. On 30 March Grayson supported initial assault landings on Pityiliu Island Admiralties; from 22 to 24 April she was fighter-director ship for the landings at Tanahmerah Bay, Dutch New Guinea. She bombarded Biak Island 27 May and Nosmfoor Island 2 July prior to invasion landings.

On 1 September 1944 Grayson joined TG 38, for carrier strikes against the enemy in the Palau Islands, scene of the next major invasion. She returned to Seeadler Harbor 31 September. She again sailed 2 October for a major strike against Okinawa and the Philippines. Japanese planes harassed the withdrawal, and on 15 October Gray-son rescued 194 men from the torpedoed light cruiser Houston, who was towed safely to Ulithi.

From Ulithi, Grayson sailed straight to Saipan, where on 3 November she took up radar picket and lifeguard duty. Finally Grayson was ordered home, reaching Seattle 9 June 1945 for her first real rest since the war began.

Grayson returned to Pearl Harbor 1 September 1945, the day of the signing of the Articles of Surrender in Tokyo Bay. After brief training she sailed for the United States. Transiting the Panama Canal 8 October, she put in at Charleston, S.C., 16 October. Eleven days later the battle-scarred "tin can" hosted over 5,000 visitors as a grateful and jubilant public paid tribute on Navy Day. Grayson remained at Charleston until decommissioned, 4 February 1947, and was placed in reserve. At present she is berthed at Orange, Tex. 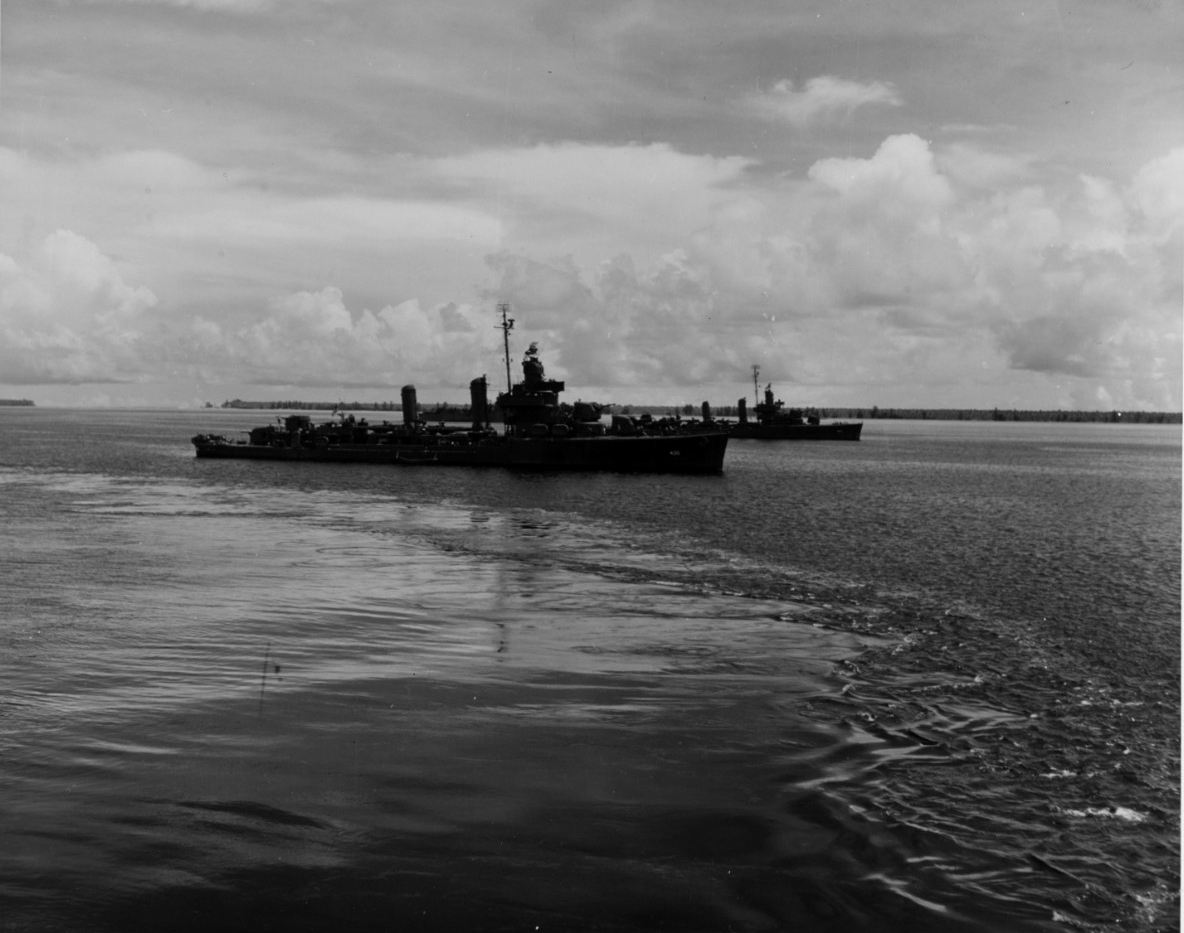 Grayson (DD-435) with a sister ship in Seeadler Harbor, Manus, Admiralty Islands on 1 April 1944. Official U.S. Navy photograph from the collections of the Naval History and Heritage Command. Catalog#: NH 50222