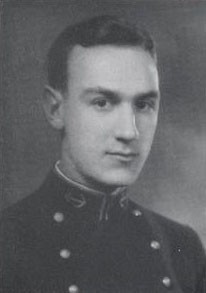 Paul Frederick Heerbrandt, son of the late Paul E. and Clara Tiews Heerbrandt, was born on 4 March 1907, in Toledo, Ohio. He attended West Technical High School in Cleveland, Ohio, and was appointed to the US Naval Academy, Annapolis, Maryland, from his native state in 1926. As a Midshipman he participated in crew, basketball and baseball. Graduated and commissioned Ensign on 5 June 1930, he subsequently attained the rank of Captain to date from 1 March 1950.

After graduation from the Naval Academy in June 1930, he joined the USS Pensacola, which in September of that year was dispatched to Brazil to protect American interests during the revolution. He remained on duty in that cruiser until December 1932, interspersed with six months' instruction at the Naval Torpedo School, Newport, Rhode Island. In May 1933 he joined the USS Oglala, a unit of the Mine Squadron, based at Pearl Harbor, TH, and while attached to that vessel participated in the Aleutian Islands survey in 1934.

Transferring in June 1935 to the USS Tillman, operating with the Training Squadron, he received Commendatory Letters on several occasions while serving aboard, for excellent work done in connection with training of Naval Reserve personnel. From June 1937 to June 1939 he had duty at the Naval Training Station, Great Lakes, Illinois, then reported to the USS West Virginia for duty as Engineering Officer. He became Executive Officer of the USS Long in February 1941, and in May 1942 assumed command of that minesweeper. He received a Letter of Commendation, with ribbon and Combat 'V,' from the Commander in Chief, US Pacific Fleet, as follows:

'For excellent service...while serving as Commanding Officer of the USS Long...during the seizure and assault on enemy held Attu Island. His ship also swept for mine in Kiska waters during the occupation of that island by our forces...He also contributed to the success of the operations of our forces in the Western Aleutians. His performance was outstanding and in keeping with the highest traditions of the United States Naval Service.'

He was detached from command of the Long in December 1943, after fifteen months in the Aleutians, then assisted in fitting out the USS O'Brien. He commanded the O'Brien from her commissioning on 25 February 1944, until July of that year, after which he was enrolled in the command course at the Naval War College, completing the course in December 1944. From January 1945 until February 1946 he was Executive Officer and finally Commanding Officer of the Naval Training Center, Miami, Florida.

In March 1946 he reported as Executive Officer of the Naval Advisory Group to China, at Tsingtao, and after a year in that assignment took command of the USS Chipola (AO-63) in May 1947. In June 1948 he became Director of Training for the First Naval District, Headquarters at Boston, Massachusetts, where he remained for two years.

In October 1950 he assumed command of the USS Oglethorpe, a unit of Amphibious Forces, Atlantic, remaining in command during a tour of the Mediterranean with the SIXTH Fleet, until March 1952. From April of that year until February 1955 he served on the Staff of Commander Military Sea Transportation Service, Washington, DC, as Director, Passenger and Tanker Division.

Ordered next to the Hawaiian Sea Frontier and Fourteenth Naval District, Headquarters at Pearl Harbor, TH, he served as Assistant Chief of Staff, for Logistics, to the Commandant until early 1957. Under orders of 23 January 1957, he served as Commanding Officer, Naval Station, US Naval Base, Newport, Rhode Island, until 29 January 1960. Captain Heerbrandt retired from the US Navy February 1960.