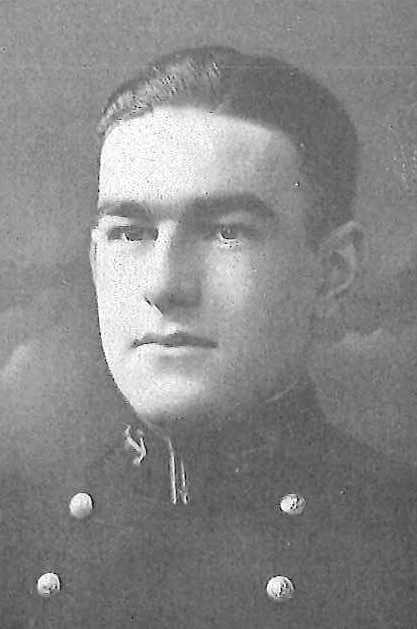 Robert William Cavanagh was born in Cleveland, Ohio, on November 18, 1904. He attended public schools in Cleveland, and had one year at Oberlin College, Ohio, before his appointment to the US Naval Academy, Annapolis, Maryland, from the 20th District of Ohio in July 1922. He was graduated and commissioned Ensign on June 3, 1926, and through subsequent promotions attained the rank of Rear Admiral to date from July 1, 1954.

Returning to Annapolis, he was under instruction in Engineering at the Postgraduate School for two years and, continuing the course at the Naval Boiler Laboratory, Philadelphia, Pennsylvania, and the University of California, at Berkeley, he was graduated with the degree of Master of Science in Engineering from the latter on June 18, 1936.

He was next assigned to Submarine Division Ten, Squadron Five of, the Asiatic Fleet, with consecutive duty aboard USS-S-29 and USS S-37, and from March 14 to November 25, 1938, was Commanding Officer of USS S-41. Detached from the latter, he returned to the United States, reporting on January 27, 1939, to the Bureau of Engineering, Navy Department, Washington, DC he was detached in July 1940, a month after that Bureau was combined with the Bureau of Construction and Repair and redesignated the Bureau of Ships.

Ordered to USS Brooklyn, he joined that cruiser on the West Coast in August 1940, and was aboard her when the United States entered World War II in December 1941. In February 1943 he assumed command of USS Dahlgren, a destroyer used as an experimental engineering and sonar training vessel at Key West, Florida. In December 1942 he was ordered to the Pacific War Area, and soon after took command of USS Stanly, a unit of Destroyer Squadron Twenty-Three, Pacific Fleet. That squadron was awarded the Presidential Unit Citation, and he was personally awarded the Navy Cross, the citations following in part:

Presidential Unit Citation: “For extraordinary heroism in action against enemy Japanese forces during the Solomon Islands Campaign, from November 1, 1943 to February 23, 1944. Boldly penetrating submarine-infested waters during a period when Japanese naval and air power was at its height, Destroyer Squadron Twenty-Three operated in daring defiance of repeated attacks by hostile air groups, closing the enemy’s strongly fortified shores to carry out sustained bombardments against Japanese coastal defenses… Commanded by forceful leaders and manned by aggressive, fearless crews, the ships of squadron twenty-Three coordinated as a superb fighting team; they countered the enemy’s fierce aerial bombing attack and destroyed or routed his planes; they intercepted his surface task forces, sank or damaged his warships by torpedo fore and prevented interference without transports…”

Navy Cross: “ For extraordinary heroism as Commanding Officer of the USS Stanly, in action against enemy Japanese forces in the Solomon Islands on the night of November 1-2, 1943. With his Task Force engaging a Japanese surface force of superior fire power (he) hurled the full fighting strength of his ship against the enemy and, by his inspiring leadership and skilled combat tactics, aided his Task Force in sinking five hostile warships, in damaging four others, and in completely routing the enemy, thereby contributing materially to the successful establishment of our beachhead on Bougainville Island…”

Legion of Merit: “For exceptionally meritorious conduct… during operations against enemy Japanese forces in the South and West Pacific from January 4, 944 to January 9, 1945. Conducting many independent bombardment and other missions during this period, Captain Cavanagh maneuvered the ships under his command with skill and precision, inflicting heavy damage on the enemy. By his planning, leadership and skill, Captain Cavanagh contributed materially to the capture of Japanese held territory …”

Bronze Star Medal; “For heroic achievement as Commander Destroyer Division Forty-Six… in action against enemy Japanese forces Northwest of the Bismarck Archipelago, at Kavieng, New Ireland, and on the Duke of York Island, February 17 to 23, 1944… (He) fight his ships gallantly despite intense fore from hostile shore batteries and aircraft (and) directed his vessels in destroying two Japanese auxiliary vessels, one large cargo ship, a mine layer and four barges, and inflicting heavy damage on important shore installations, subsequently bringing his destroyer through these hazardous engagements without damage…”

Gold Star in lieu of the Second Bronze Star Medal: “… While serving as Commander of a Destroyer Division under the operational command of the Seventh Amphibious Force, and forming a part of the screen of the first Mindoro resupply echelon in December 1944. When attacking Japanese planes damaged two landing ships and a liberty-type merchant ship, setting them on fire, (he) was ordered to take charge of the rescue operation. Fire and explosion finally forced the abandonment of both landing ships, and while survivors from these ships were being picked up, the rescue group was attacked by four Japanese planes, three of which were shot down… Captain Cavanagh got the liberty ship and the two landing vessels of the rescue group underway, arriving at his destination before the scheduled time of unloading…(and) contributed materially to the saving of many lives…”

As Commander of a Task Unit in operations in support of landing forces for the liberation of Bataan-Corregidor, and Panay-Negros in the Philippines from February 16 to April 24, 1945, he was also awarded a Gold Star in lieu of the third Bronze Star Medal with Combat “V,” and cited for “contributing materially to the success of these operations.”

Under ordered of May 1945, he returned to the United States and reported for duty as Assistant Director of Welfare Activities, Bureau of Naval Personnel, Navy Department. In December 1948 he was ordered to sea as Commander Destroyer Squadron Five, and a year later he reported to the Naval Academy to serve as Officer in Charge of the Engineering and Design Department. After his detachment, he was a student at the national War College, Washington, DC, during the school year 1951-1952.

In June 1952, he assumed command of Transport Squadron ONE, and in August 1953, reported to the Commander in Chief, Naval Forces, Far East, to serve as Branch Chief, Operations and Plans Division, Joint Staff, Commander in Chief, Far East Command.  “For exceptionally meritorious conduct in the performance of outstanding service during the period September 11, 1953 to July 27, 1954,” he was awarded an Oak Leaf Cluster in lieu of the Second Legion of merit by the Department of the Army.  In January 1955, he was designated Deputy Director of Naval Intelligence, Office of the Chief of Naval Operations, Navy Department, Washington, DC, effective April 1955.

He Command Cruiser Division FOUR during the period April 14, 1956 to January 1957, when he became Commander Amphibious Group TWO.  He was US Naval Attache, London, England, between September 1, 1958 and November 1960 then assumed command of the Cruiser Force, Atlantic Fleet, with additional duty as Commander Cruiser Division SIX.  In November 1961, he reported as Commandant of the Fourth Naval District, headquarters in Philadelphia, Pennsylvania, with additional duty as Commander Naval Base, Philadelphia.  He served as Chief of the Military Assistance Advisory Group, Norway, headquartered in Oslo from January 1965 until relieved of active duty pending his retirement, effective December 1, 1966.  “For exceptionally meritorious service…(in that capacity) from January 15, 1965 to November 30, 1966…” he was awarded a Gold Star in lieu of the Third Legion of Merit.  The citation further states in part:

“…Rear Admiral Cavenagh effectively executed the mission and responsibilities of the Military Assistance Advisory Group with respect to the Military Assistance Program in Norway.  Through his dynamic personality, knowledgeable background and relentless endeavors, he has accomplished much in bringing the Governments of Norway and the United States into closer affiliation and has also greatly enhanced the posture of Norway’s military forces and their capability to meet their requirements under the NATO Alliance…”