Caption: V-4 (SF-7) became Argonaut (SM-1) in 1931. She is shown here in peacetime gray, circa 1930. Note the 6-inch guns forward and aft of the conning tower, and what appear to be exercise torpedoes on deck just forward of mount one. Also note her alphanumeric "name," V-4, in white on a black rectangle on the tower structure, and repeated in black at the bow. (NH 54425)

A relative of the octopus, sometimes called the paper nautilus, which propels itself underwater by expelling a jet of water. The name argonaut may also have been inspired by the submarine of that name built in 1897 by Simon Lake which was the first submarine to navigate extensively in the open sea. Ultimately, the name is derived from the band of 50 heroes in Greek legend who sailed with Jason in the ship Argo to retrieve the Golden Fleece. 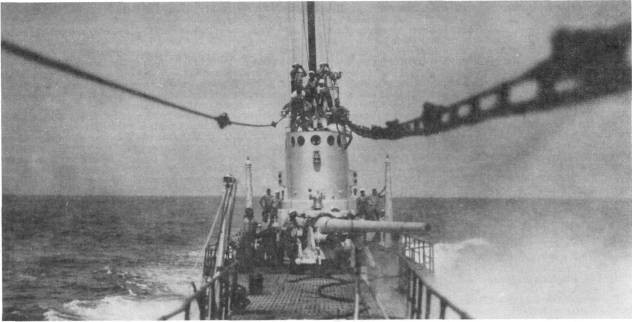 Caption: Argonaut, along with Nautilus (SS-168) and Narwhal (SS-167), enjoyed the distinction of mounting the largest guns of any American submarine; here, Argonaut's men draw a crowd as they train out her forward 6-incher in the 1930's. (NH 62906)

The first Argonaut was laid down as V-4 on 1 May 1925 by the Portsmouth (N.H.) Navy Yard; launched on 10 November 1927; sponsored by Mrs. Phillip Mason Sears, the daughter of Rear Admiral William D. MacDougall; and commissioned on 2 April 1928, Lt. Comdr. W. M. Quigley in command.

V-4 was the first of the second generation of V-boats commissioned in the late 1920's. These submarines were exempt by special agreement from the armament and tonnage limitations of the Washington Treaties. V-4 and her sister ships V-5 and V-6 were designed with larger and more powerful diesel engines than those which had propelled the earlier series of V-boats, which had proven to be failures. The specially-built engines failed to produce their design power and some developed dangerous crankshaft explosions. V-4 and her sister ships were slow in diving and, when submerged, were unwieldy and slower than designed. They also presented an excellent target to surface ship sonar and had a large turning radius.

V-4 was designed primarily as a minelayer. She was the first and only such experimental ship ever built. She had four torpedo tubes forward and two minelaying tubes aft. At the time of her construction, V-4 was the largest submarine ever built in the United States. Following commissioning, V-4 served with Submarine Division 12 based at Newport, R.I. In January and February 1929, V-4 underwent a series of trials off Provincetown, Mass. On a trial dive during this period, she submerged to a depth of 318 feet. This mark was the greatest depth which an American submarine had reached up to that time. On 26 February 1929, V-4 was assigned to Division 20, Submarine Divisions, Battle Fleet, and arrived at San Diego, Calif., her new home port, on 23 March. From there, she participated in battle exercises and made cruises along the west coast.

V-4 was renamed Argonaut on 19 February 1931 and was redesignated SM-1 on 1 July of that year. On 30 June 1932, shearrived at Pearl Harbor, where she was assigned to Submarine Division 7. The vessel carried out minelaying operations, patrol duty, and other routine work. In October 1934 and again in May 1939, Argonaut, took part in joint Army-Navy exercises in the Hawaiian operating area. Argonaut became the flagship of Submarine Squadron 4 in mid-1939. The submarine returned to the west coast in April 1941 to participate in fleet tactical exercises.

On 28 November 1941, Argonaut left Pearl Harbor and was on patrol duty near Midway Island when the Japanese attacked Pearl Harbor. After sunset on 7 December, Argonaut surfaced and heard naval gunfire around Midway. It was assumed that the Japanese were landing a large invasion force. Argonaut then submerged to make a sonar approach to the "invasion force." While designed to be a minelayer and not an attack submarine, Argonaut made the first wartime approach on enemy naval forces.

The "invasion force" turned out to be two Japanese destroyers whose mission was shore bombardment on Midway. The ships may have detected Argonaut, and one passed close by the submarine. They completed the bombardment then retired before Argonaut could make a second approach.

One week later, Argonaut made contact with three or four Japanese destroyers. Her captain, Stephen Barchet, wisely decided not to attack. On 22 January 1942, she returned to Pearl Harbor and, after a brief stop there, proceeded to the Mare Island Navy Yard for conversion to a troop transport submarine.

Argonaut returned to action in the South Pacific in August. Admiral Chester Nimitz assigned Argonaut and Nautilus (SS-168) to transport and land Marine commandoes on Makin in the Gilbert Islands. This move was designed to relieve pressure on American forces that had just landed on Guadalcanal. On 8 August, the two submarines embarked troops of Companies A and B, 2d Raider Battalion, and got underway for Makin. Conditions during the transit were unpleasant, and most of the Marines became seasick. The submarines arrived off Makin on 16 August; and, at 0330 the next day, the Marines began landing. In a prelude to later battles of the Pacific War, the entire Japanese garrison fought to the death, losing at least 83 men in combat ashore and perhaps an equal number lost trying to escape in boats sunk offshore. The Marines lost 21 men, about 10% of the landing force. During the evacuation on 18 August, nine Marines are inadvertantly left on the island. Later captured by the Japanese they are taken to Kwajalein and executed on 16 October.

Argonaut arrived back in Pearl Harbor on 26 August. Her designation was changed to APS-1 on 22 September, and her base of operations was transferred to Brisbane, Australia, later in the year. In December, the submarine departed Brisbane to patrol in the hazardous area between New Britain and Bougainville, south of St. George's Channel. On 10 January 1943, Argonaut spotted a Japanese convoy of five freighters and their destroyer escorts. An Allied Army aircraft was by chance flying overhead and witnessed Argonaut's attack. Argonaut hit at least one of the destroyers with her torpedoes, and they promptly counterattacked. A crew member on board the plane saw Argonaut's bow suddenly break the water at an unusual angle. It was apparent that a depth charge had severely damaged the submarine. The enemy destroyers circling Argonaut fired shells into the boat from point blank range until she slipped below the waves. One hundred and five officers and men went down with the submarine. Her name was struck from the Navy list on 26 February 1943.