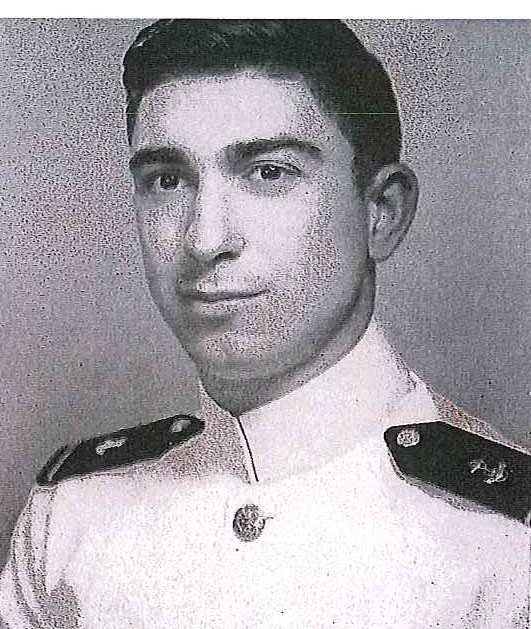 Lucien Capone, Jr. was born in Fall River, Massachusetts, on October 18, 1925, son of Lucien and Louise D. (Malafronte) Capone. He attended Bristol (Rhode Island) Senior High School and Providence (Rhode Island) College. While in high school, he was a member of the Rhode Island Honor Society, received the Rotary scholarship awarded by the City of Bristol and was Salutatorian of the Class of 1943. In September 1944 he enlisted in the US Army Reserve and had recruit basic infantry training at Camp Joseph T. Robinson, Arkansas. He attended the Officer Candidate S at the Infantry School, Fort Benning, Georgia, from February to June 1945, when he entered the US Naval Academy, Annapolis, Maryland, on appointment from the State of Rhode Island. Graduated and commissioned Ensign on June 3, 1949, he subsequently advanced in rank to that of Captain, to date from September 1, 1969. His selection for rank of Rear Admiral was approved by the President on January 30, 1974.

Following graduation from the Naval Academy in 1949, he joined the USS William C. Lawe (DD-763) and in August 1951 was detached for instruction at the Naval Combat Information Center Officer School, Glenview, Illinois. In March 1952 he reported as Combat Information Center Officer on board USS Keppler (DDE-765) and in June 1953 transferred to USS Strickland (DER-333) to serve as Operations Officer until June 1954. He next had instruction in Command Communications at the Naval Postgraduate School, Monterey, California. In July 1955 he became Head of the Project Plans Unit, Future Plans Section, Office of the Chief of Naval Operations, Navy Department, Washington, DC in that capacity he had duty in connection with communication future plans.

In July 1957 he reported as Executive Officer of USS Huse (DE-145) and while on board that destroyer participated in operations off Puerto Rico in connection with the launching of a Vanguard satellite test vehicle, the subsequent nose cone recovery efforts and in important NATO exercises in Northern European waters. He joined the Staff of Commander Middle East Force as Communication Plans Officer in July 1959 and as such served additionally as Representative of the Commander Middle East Force to the State Department, US Army, US Air Force and US Navy Planning Groups. From February 1961 to March 1963 he was Head of the Plans and Programs Branch at the Naval Communication System headquarters, Washington, DC. In that capacity, he also had duty as the Naval Representative to the defense Communication Agency mid- Range Planning Group.

During march and April 1963 he attended the Atlantic Fleet Anti-submarine Warfare Tactical School, Norfolk, Virginia and in May assumed command of USS Hammerberg (DE-1015), which, under his command, participated in UNITA IV—the circumnavigation of South American to conduct antisubmarine warfare operations with seven South American navies. The Hammerberg was awarded the Commander Cruiser Destroyer Force, US Atlantic Fleet Gunnery and Antisubmarine Warfare “E” Award.

Assigned in September 1964 to the Defense Communication Agency, Washington, DC, he had duty in connection with National Military Command system matters until December 1964, then became Deputy Chief of Staff. He was awarded the Joint Service commendation medal and cited in part as follows:

“Commander Lucien Capone, Jr. distinguished himself by exceptionally meritorious service…from January 16, 1965 to July 15, 1966. Through his superior managerial ability, incisive judgement and comprehensive grasp of the many complex activities of this Agency, (he) made outstanding contributions to the accomplishment of tasks of major importance to defense communications….”

He reported in July 1966 for instruction at the Industrial College of the Armed Forces, Washington, DC, and in 1967 received the degree of Master of Science in Business Administration from George Washington University. In August 1967 he assumed command of USS Dahlgren (DLG-12) and in August 1969 became Assistant Commander for Plans, Programs and Requirements at the Naval Communications Command, Washington, DC. “For exceptionally meritorious conduct…” in the latter capacity, he was awarded the Legion of Merit. The citation further states in part:

In May 1972 he assumed command of the USS Richmond K. Turner (DLG-20) and in March 1974 was ordered detached for duty as Deputy Director for National Military Command Systems Technical Support, Defense Communications Agency, Washington, DC.