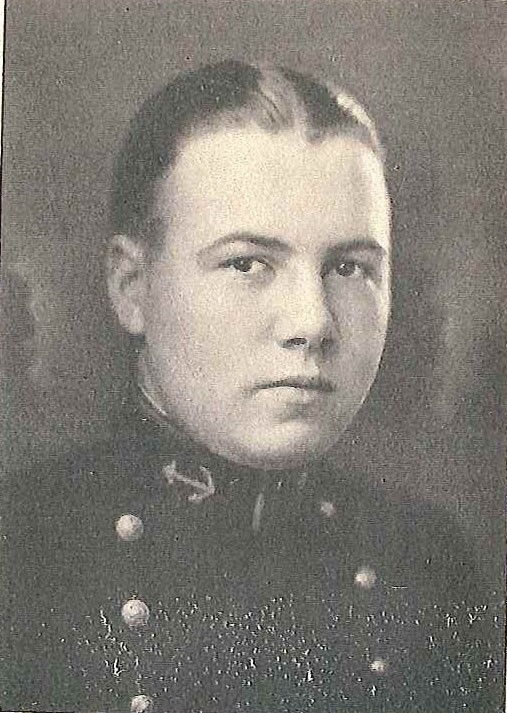 Karl Joseph Biederman was born in Mexico, New York, on March 21, 1905, son of Charles I. and Monica Brown Biederman. He attended Oneonta (New York) High School, and on June 27, 1922, entered the US Naval Academy on appointment from the Thirty-fourth District of New York. While a Midshipman he participated in Class lacrosse (2 years) and was a member of the Mandolin Club (1 year). He was graduated and commissioned Ensign on June 3, 1926, and subsequently advanced to the rank of Captain, his date of rank August 1, 1943.

After graduation from the Naval Academy in 1926, he was assigned to USS Raleigh (CL-7), which during February and March 1927 operated in Nicaraguan waters. Continuing sea duty, he joined USS Toucey in August 1927, and in May 1930 was transferred to USS Blakeley (DD-150). In June 1931 he reported on board USS Nokomis, which from that date until his detachment in May 1933 was on survey duty in Cuba and Panama.

Between June and May 1935 he had instruction in Ordnance Engineering at the Postgraduate School, Annapolis, Maryland, completing and course at the Navy Yard, Washington, DC, in May 1936. He was next assigned to USS Arizona (DD-39), and served in that battleship until May 1939. He then had shore duty as Resident Inspector of Naval Material, Vickers, Incorporated, Detroit, Michigan, and was serving in that capacity when the United States entered World War II on December 8, 1941.

Fitting out duty in USS Columbia (CL-56) at the New York Shipbuilding Corporation, Camden, New Jersey, preceded service as Gunnery Officer of that cruiser from her commissioning, July 29, 1942, until March 1944. “For meritorious achievement as Gunnery Officer of USS Columbia, during action against enemy Japanese forces in the Northern Solomon Islands area from October 30 to November 2, 1943….” he was awarded the Bronze Star Medal, with Combat “V.” The citation continues, in part:

“Maintaining the gunnery department of his ship at the peak of combat efficiency despite heavy fire from hostile shore batteries and air raids, Captain (then Commander) Biederman contributed directly to the Columbia’s success in the initial bombardment of the Buka-Bonis Area, the first daylight assault of the Shortland Area, the night engagement with a Japanese surface force of superior fire power in which the enemy sustained a decisive defeat and a subsequent air attack by sixty-seven hostile dive bombing planes, of which seventeen were destroyed by our Task Force…(contributing) to the protection of our beachhead at Empress Augusta Bay and to the successful establishment of our land and air forces on Bougainville Island…”

He assisted in fitting out USS Atlanta (CL-104) at the New York Shipbuilding Corporation’s plant at Camden, New Jersey, after his return to the Untied States from the Pacific, and upon that cruiser’s commissioning on December 2, 1944, became her Executive Officer. He was serving in that capacity when the Atlanta participated in the Fifth and Third Fleet raids in support of the Okinawa Gunto operation from March 17 to June 11, 1945.

Before the cessation of hostilities he was ordered to the United States for duty as Factory Officer and Industrial Relations Officer at the Naval Torpedo Station, Newport, Rhode Island. Remaining in Newport, he attended the Senior Course at the Naval War College from June 1947 until May 1948, at which time he was ordered to sea as Commanding Officer of USS Yellowstone (AD-27). He commanded that destroyer tender until April 13, 1949, when he was transferred to command of the Naval Ordnance Plant, York, Pennsylvania. A year later he reported as Commanding Officer of the Naval Ordnance Plant, Forest Park, Illinois.