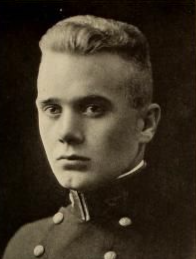 Howard Emery Orem was born on November 4, 1900, in Corning, California, son of Horatio Orem and Mrs. (Agnes Elizabeth Lewis) Orem. He entered the US Naval Academy, Annapolis, Maryland, upon appointment from the Second District of Oregon in 1918. Graduated and commissioned Ensign on June 3, 1922, he subsequently attained the rank of Rear Admiral to date from January 1, 1951.

Following graduation from the Naval Academy in 1922, he joined the USS Idaho, operating with Division EIGHT, Battleship Squadron FOUR, Pacific, and later with Division FIVE, Battleship Divisions, Battle Fleet. After a year aboard the IDAHO, and a month’s service in the USS Newport News ending in August 1923, he reported to the Asiatic Station, where he had consecutive duty in the USS Tracy and the USS William B. Preston. Detached from the latter in December 1925, he reported in April 1926 aboard the USS Tennessee. Seven months later he was assigned to the USS Army transport Chateau Thierry, at San Francisco, California, for transfer to the East Coast.

Between January and May 1927 he had duty in the USS Lawrence, a unit of Division FORTY, Squadron FOURTEEN, Scouting Fleet, after which he was ordered for instruction in mechanical engineering at the Postgraduate School, Annapolis, Maryland. He continued the course from June 1928 to July 1929 at Columbia University, New York, New York, where he received the degree of Master of Science. Completing his instruction, he joined the USS Maryland, operating consecutively with Battleship Divisions FIVE and FOUR, Battle Fleet, and in May 1931 transferred to the USS Waters, a unit of Destroyer Division FOUR, Battle Fleet.

In July 1932 he was assigned to the Navy Yard, Philadelphia, Pennsylvania, remaining there until August 1934 when he reported aboard the USS New York, operating with Battleship Division ONE, Battle Force. He became Assistant Gunnery Officer aboard that vessel in May 1936, and in February 1937 was assigned duty in that battleship as Gunnery Officer. Detached from the NEW YORK, he returned to the Naval Academy as an Instructor in electrical engineering, continuing to serve as such until May 1939. For four years, June 1939 to June 1943, he had duty on the staff of Commander Cruiser Division SEVEN, as Executive Officer of the USS Wichita; and on the staff of Commander cruiser Division SIX. During this time he also served as Chief of Staff to the Commander of various task groups and task forces.

For outstanding services during the early part of World War II, he was awarded the Legion of Merit with Combat “V,” and the Bronze Star Medal with Combat “V.” The citations follow in part:

Legion of Merit: "For exceptionally meritorious conduct…as Senior Liaison Officer between United States and British Naval Forces in Icelandic, British and North Sea waters during the period August 1941 to August 1942. Throughout the early phases of the transfer of North Atlantic convoy control to our Navy and during the establishment of Naval Activities in Iceland, (he)…executed his vital duties with exceptional vigor and skill. In addition, he accomplished many important missions involving liaison and joint operational matters with such outstanding success that he achieved a much improved mutual understand1ng and a closer cooperation between the two navies…”

Bronze Star Medal: "For meritorious service as Chief of Staff and Operations Officer on the Staff of the Commander of Task Force 19 in action against enemy Japanese forces off Guadalcanal and Rennell Islands and in the Aleutian Islands, from December 11, 1942 to June 20, 1943…(he) rendered invaluable assistance to his Task Force Commander throughout numerous vital engagements with hostile forces in these strategic areas thereby contributing materially to the successful accomplishment of all assigned missions…”

He also received two Letters of Commendation, with authorization to wear the Commendation Ribbon and the Bronze Star in lieu of a second similar award, from the Commander in Chief, US Atlantic Fleet and the Secretary of Navy, respectively. The citations follow in part:

Letter of Commendation:  "For meritorious service as Executive Officer of the USS WICHITA from February 1942 until November 1942…(He was) ordered to improve the readiness condition of the ships for war.”

Bronze Star in lieu of Second Commendation Ribbon: “For outstanding service ae Senior Officer on the staff of Commander of a Cruiser Division and later as Executive Officer of a cruiser. In the former post, acting as principal representative in joint operational matters of considerable magnitude with British naval forces, youwere eminently successful in achieving close cooperation and stronger combined strength of the joint forces. Subsequently, while attached to the cruiser, your superior performance of duty in training and directing the ship’s company in organized damage control was evidenced in the prompt arresting of fire and other damage from hostile shells  during action off Casablanca, French Morocco, November 8, 1942..”

In April 1943 he became Aide and Flag Secretary on the staff of the Commander in Chief, US Fleet, with headquarters at the Navy Department, Washington, DC,  "For exceptionally meritorious conduct…” in this assignment from October 15, 1943 to June 18, 1945, he was awarded a Gold Star in lieu of the Second Legion of Merit. The citation continues in part:  "Discharging his responsibilities with sound judgment and outstanding professional  skill, (he) rendered distinguished service in directing the administrative functions of the Staff, Commander in Chief, United States Fleet, throughout this vital period…”

He assumed command of the USS Houston in July 1945, and served in that capacity until relieved in June 1946 with order to return to the United States. Following temporary duty in the Bureau of Naval Personnel, Navy Department, he reported in August 1946 for instruction at the National War College, Washington, DC. Completing the course there in June 1947, he joined the staff of Commander in Chief, US Pacific Fleet, as Assistant Chief of Staff for Logistics. He continued staff duty until June 1948, when he reported as Deputy Director in the International Affairs Division, Office of the Chief of Naval Operation, Navy Department. In August 1949 he became Director of that Division, and continued to serve as such until December 1950, when he assumed command of Amphibious Group FOUR, Atlantic Fleet.

On June 5, 1952 he became Commander Naval Forces, Germany, serving in that capacity until April 1954, when he reported as Assistant Chief of Naval Operations (Operations), Navy Department, Washington, DC. In July 1954 his title was changed to Assistant Chief of Naval Operations (Plans and Policy). He was assigned to the Joint Strategic Survey Committee, Joint Chiefs of Staff, Washington, DC from December 7, 1955 until relieved of all active duty pending his retirement, effective May 1, 1957. Upon retirement he was advanced to the rank of Vice Admiral on the basis of combat awards.

He has also been awarded the Order of Kutuzov (third degree), from the Government of the Union of Socialist Soviet Republics; the Star of Africa (Grand Commander) by the Government of Liberia; and was cited in DESPATCHES by the British Government.

They have one sone, Lieutenant Charles A. Orem, USN, Naval Academy Class of 1950.