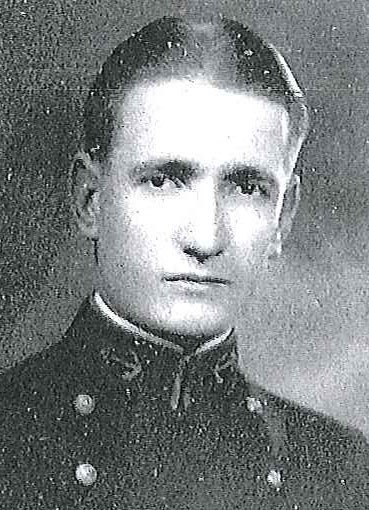 Jefferson Rice Dennis was born in Colorado Springs, Colorado, on April 10, 1909, son of Mrs. Charlotte Corday (Rice) Dennis and the late Dr. Frank L. Dennis. He attended Colorado Springs High School, prior to his appointment to the US Naval Academy, Annapolis, Maryland, from his native state in 1926. As a Midshipman he participated in swimming and cross country. Graduated and commissioned Ensign on June 5, 1930, he subsequently advanced in rank, attaining that of Captain to date from April 1, 1949, having served in that rank (temporary) from December 10, 1945 to January 1, 1948. His selection for rank of Rear Admiral was approved by the President on July 26, 1957, and by posthumous promotion his date of rank is July 26, 1957.

Following graduation from the Naval Academy in 1930, he joined USS Oklahoma, and in May 1932 transferred to USS Alden. Detached from the latter vessel in February 1934, he served for three months in the USS Sicard, prior to reporting for duty on board USS MacLeish. From December 1935 until June 1936 he had submarine training at the Submarine Base, New London, Connecticut, after which he served until June 1937 in USS S-21.

In July 1937 he was assigned to the Communication Division, Office of the Chief of Naval Operations, Navy Department, Washington, DC, and in January 1939 reported for communications duty in the Sixteenth Naval District, at headquarters in the Navy Yard, Cavite, Philippine Islands. In February 1940 he became Assistant Fleet Communications Officer on the staff of the Commander in Chief, US Asiatic Fleet, USS Augusta, and later USS Houston, flagship, and remained in that assignment until October 1941.

Ordered to the Federal Shipbuilding and Dry Dock Company, Kearny, New Jersey, he assisted in the fitting out of USS Aaron Ward and joined that destroyer as Executive Officer upon her commissioning on March 4, 1942. Returning to duty ashore in May 1942, he was again assigned to the Division of Naval Communications, Navy Department, and in September 1944 was transferred to Pearl Harbor, Territory of Hawaii, for duty with the Pacific Fleet Radio Unit.

“For exceptionally meritorious conduct…while attached to the Division of Naval Communications, from May 18, 1942 to September 2, 1945…” he was awarded the Legion of Merit. The citation continues in part: “Discharging his important duties with skill and initiative, (he) rendered invaluable assistance in carrying out the vital work of the Communication Intelligence Organization throughout a critical period in the history of our country. By his outstanding professional ability and uncompromising devotion to the fulfillment of an exacting assignment, (he) contributed substantially to the effectiveness of important operations which culminated in the successful conclusion of World War II…”

He was also entitled to the Ribbon for, and a facsimile of the Navy Unit Commendation awarded the Naval Communication Intelligence Organization.

Between November 1945 and February 1950 he served with the Communications Security Group, Communications Division, Office of the Chief of Naval Operations. He was next assigned to the National Security Agency, Washington, DC, and in July 1953 joined the staff of the Commander in Chief Naval Forces, Eastern Atlantic and Mediterranean, as Assistant Chief of Staff for Intelligence. He was Assistant Director for Communication Security Matters in the Office of the Chief of Naval Operations from February 1955 until August 1957.

He was posthumously awarded the Distinguished Service Medal and cited in part as follows: “For exceptionally meritorious service…from June 15, 1955 to February 17, 1958 as Assistant Director, Naval Communications Division for Security Group Matters; Head, Naval Security Group; and Assistant Director, National Security Agency, and Director of the Production Organization of that agency. Exercising outstanding ingenuity and superior aptitude, Rear Admiral Dennis was imminently successful in discharging his many responsibilities throughout this period. An Officer of remarkable technical ability and keen intelligence, Rear Admiral Dennis made significant contributions to the missions of the Chief of Naval Operations and the National Security Agency…”