The name source for the first two ships named Augusta -- (a brig and a side wheel steamer) -- is not certain. The third ship, a motor yacht, Augusta (S.P. 946), retained the name she had carried prior to her acquisition by the Navy. The fourth, light cruiser Augusta (CL-31) (later reclassified as a heavy cruiser, CA-31), was named for the city in Georgia. The fifth Augusta (SSN-710) was named for the capital city of Maine.

Augusta carried out her shakedown training in the western Atlantic and in the West Indies with Submarine Squadron 2, including visits to the Bahamas, Puerto Rico, and the U.S. Virgin Islands, until mid-June 1985. The attack submarine completed her post-shakedown repairs during an availability at the Electric Boat yard where she was built (14 June 1985–26 January 1986 — she conducted sea trials from 21–24 January). The shipyard treated Augusta’s hull, and outfitted her with the CCS Mk 1 Combat Control System, an advanced development of the AN/BQG-5D Wide Aperture Array System, and the Thin Line Towed Array. The following month (10–22 February), she sailed to the Virgin Islands for weapons certifications and technical evaluations.

During a surge deployment to the North Atlantic, Mediterranean, and Red Sea (10 February–11 August 2003), Augusta took part in Operations Enduring Freedom and Iraqi Freedom. She launched UGM-109 Tomahawk Land Attack Missiles (TLAMS) against Iraqi military targets on 21 March, and Cmdr. Mike A. Haumer, Augusta’s commanding officer, received the Bronze Star for his “extraordinary leadership and operational skills” in command of the boat during the fighting. 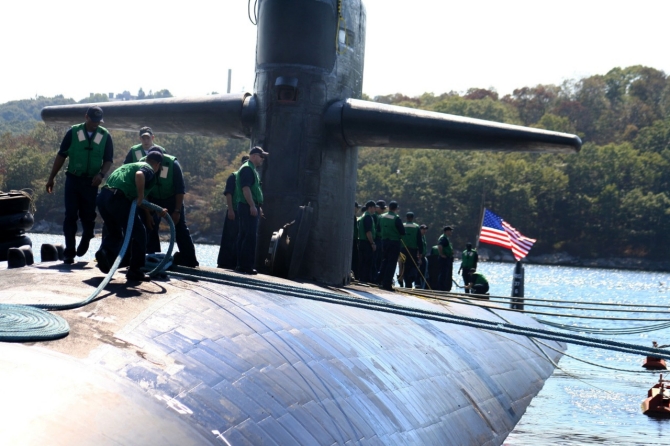 Augusta held an inactivation ceremony at Shepherd of the Sea Chapel, Naval Submarine Base New London on 7 February 2008 (she was inactivated on 15 April 2008), and was decommissioned and stricken from the Navy List on 11 February 2009. She subsequently underwent the inactivation process, which included removing materials, tools, spare parts, and furnishings, at Norfolk Naval Shipyard, Portsmouth, Va. Augusta was subsequently towed to Puget Sound Naval Shipyard, Bremerton, Wash., where she lies moored, awaiting disposal.