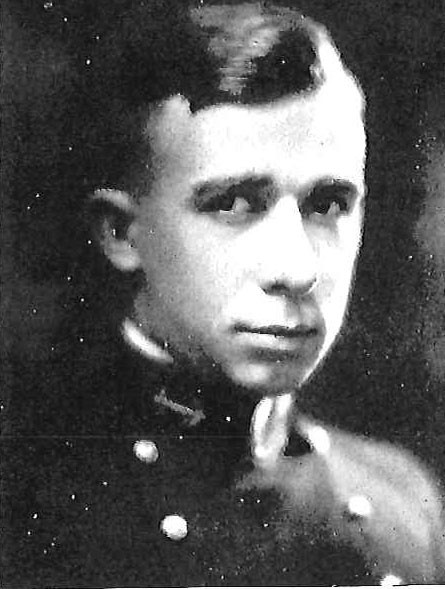 Adolph Ernest Becker, Jr., was born on August 17, 1900, at Ocean Grove, New Jersey, son of Adolph E. and Mrs. Elizabeth C. (Lawrence) Becker. He attended Asbury Park, New Jersey High School before appointment to the US Naval Academy, Annapolis, Maryland, from his native state in 1918. Graduated and commissioned Ensign on June 2, 1922, he subsequently attained the rank of Captain to date from June 21, 1942.

Following graduation from the Naval Academy in June 1922, he was assigned to USS Case, a unit of September 9, Destroyer Squadrons, Scouting Fleet. From June to December 1923 he had instruction at the Naval Torpedo School, and upon completion of the course, rejoined the USS Case. Transferred to USS Nokomis in 1924, he participated in hydrographic surveys of Haiti and the north coast of Cuba. From May 1925 until June 1929, he served in USS Bruce, operating first with Naval Forces, Europe, and later as a unit of Sauadron 9, Scouting Force.

A two year tour of duty at the Naval Training Station, Naval Operating Base, Hampton Roads, Virginia, preceded duty aboard the battleship Arkansas, Flagship of the Drill Squadron. From December 1932 throughout 1933, he served in USS Brazos, of Train Squadron 1, Base Force, after which for more than two years he had duty in the Division of Fleet Training, Office of the Chief of Naval Operations, Navy Department, Washington, DC.

In the fall of 1935, he joined the commissioning detail of the USS Tucker and became her Executive Officer. This period of duty extended to early 1937. In command of USS Trever, operating with Destroyers, Battle Force, in 1937 and until early 1939, he was commended by the Chief of Naval Operations for establishing the highest record of gunnery performance (SRP) ever achieved by a vessel of that class.

After two weeks’ instruction at the Recruiting Training School, Naval Training Station, NOB, Norfolk, Virginia, he assisted in an extensive recruiting campaign throughout the Richmond Recruiting District in the period of National Emergency, 1939-1941. In early 1941 he reported to USS Idaho, in the Pacific, and served aboard for two and one-half years, first as Navigator, later as Executive Officer. The Idaho was engaged in war patrols in the North Atlantic and in the Pacific. Participated in the assault and capture of Attu. He was detached in August 1943 to command LION 3, an advance base unit in the Atlantic, set up for the invasion of Europe. He decommissioned that unit, took the nucleus to the West Coast and commissioned LION 6 in the Pacific.

Captain Becker served as Commanding Officer of LION 6. This unit participated in the assault and capture of Guam at which place they established the Naval Operating Base. Upon the commissioning of the NOB, Guam, Captain Becker became the first Commandant. For this duty he was awarded the Legion of Merit, the citation reading in substance as follows: For “exceptionally meritorious service (in that command) from April 14, 1944 to April 15, 1945….in the initial stages of its formation….working tirelessly and with unwavering zeal despite the extremely hazardous conditions…” The citation continues “….(he) was largely responsible for the continued expansion of the newly designated establishment into a large advanced Naval operating base which furnished service of all types to our Fleet units operating in this vital area….”

From July 10, 1947 until June 12, 1948, he was in command of USS Springfield (CL 66), and on June 29 assumed command of Service Squadron 3, established to furnish logistics to operating forces in the Western Pacific. This included the operation of extensive US naval facilities at Shanghai and Taingtao. Upon deterioration of conditions in China the squadron was engages in evacuating Naval forces and US personnel from China. He remained in command until relieved on July 8, 1949, to return to the Office of the Chief of Naval Operations, where he now serves as Deputy Chief of the General Planning Group.