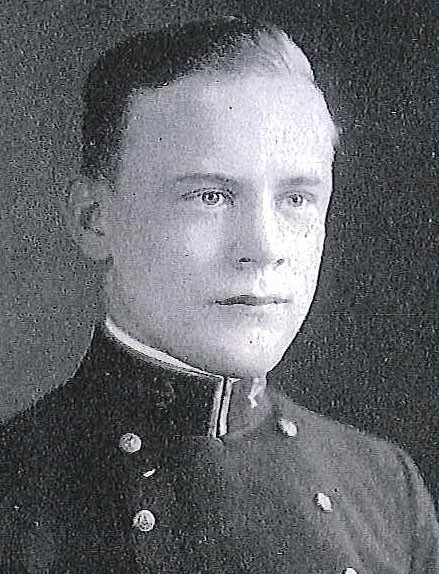 Charles Fink Fischer was born in Erie, Pennsylvania, on September 23, 1913, son of Mrs. Henrietta Fink Fischer of Erie, and the late Captain Charles H. Fischer, USN. He attended Severn Preparatory School, Severn Park, Maryland, prior to entering the U.S. Naval Academy, Annapolis, Maryland, on August 4, 1930, on appointment from Pennsylvania. As a Midshipman he was active in the Trident Literary Society and the Radio Club, and played lacrosse. Graduated on May 31, 1934, he was commissioned Ensign in the U.S. Navy, and in rank of Lieutenant (jg) resigned his commission on April 29, 1939. He accepted a commission in the Naval Reserve, advanced to the rank of Lieutenant Commander, and was transferred to the Line of the U.S. Navy and designated Aeronautical Engineering Duty Officer on February 1946. His date of rank as Commander, USN, is July 10, 1945.

Upon graduation from the Naval Academy, he was assigned to the USS Astoria, in which he served from July 1934 until December 1935 as a junior officer in the gunnery department, and as an aviation observer during that cruiser’s survey cruise to Australia and the South Pacific. During the six months to follow he was attached to the USS Herbert, with duties in communications and as a Deck Watch Officer. From July 1936 to June 1937 he was flight student as the Naval Air Station, Pensacola, Florida, being designated Naval Aviator on July 15, 1937, before his assignment to Scouting Squadron 3.

In Scouting Squadron 3, based successively on the USS Saratoga, USS Lexington and USS Ranger, he served as a dive-bomber pilot and as Squadron Radio Officer. He detached in May 1939 when his resignation from the Navy was accepted and during that summer was employed as a Pilot with American Airlines. The next two years he was a student and Instructor at the California Institute of Technology, Pasadena, California, receiving the degrees of Bachelor of Science in Aeronautical Engineering and Aeronautical Engineer. There as a Naval Reserve officer, he served with Reserve Scouting Squadron 13-R, as Executive Officer and later Commanding Officer.

Called to active duty in July 1941, he served until December 1942, during the first year of World War II, in the Bureau of Aeronautics, Navy Department, Washington, D.C. There he established and was in charge of the Rocket Desk and additionally, established and became Officer in Charge of the Rocket Test Station at Annapolis, Maryland. While so assigned he piloted the first Navy landplane JATO at Anacostia, D.C., in April 1942 (F2A), and the first seaplane JATO (a PGY) at Annapolis, in September 1942.

In December 1942 he joined patrol Squadron 211 as Executive Officer, and later commanded that squadron in the South Atlantic (anti-submarine warfare and blockade). While attached to VP-211 he had additional duty in connection with training Personnel of the Brazilian Air Force. He received a Letter of Commendation with Ribbon, from the Secretary of Navy, for services in the South Atlantic during the period ending with his detachment on October 1944. Returning to the United States, he served during the latter on the of the war in the Service Test Division, Navy Air Test Center, Patuxent River, Maryland, as Chief Projects Officer, concerned with PBM endurance and range records.

From February 1946 until October 1948 he was Engineering Officer in the Overhaul and Repair Department of the Naval Air Station, Jacksonville, Florida and while there developed aircraft disinsector. In November 1948 he reported to the Naval Air Development Center, Johnsville, Pennsylvania, to serve until September 1951 as Projects Engineer and Deputy Director, Engineering Development Services Department. For Two years thereafter he was a graduate student at Princeton University, where he also did research at the Forrestal Laboratory. He was awarded the degree of Master of Science in Aeronautical Engineering on October 1953, and since that time has been on duty in the Bureau of Aeronautics, Navy Department, as Aviation Safety and Reliability Officer.