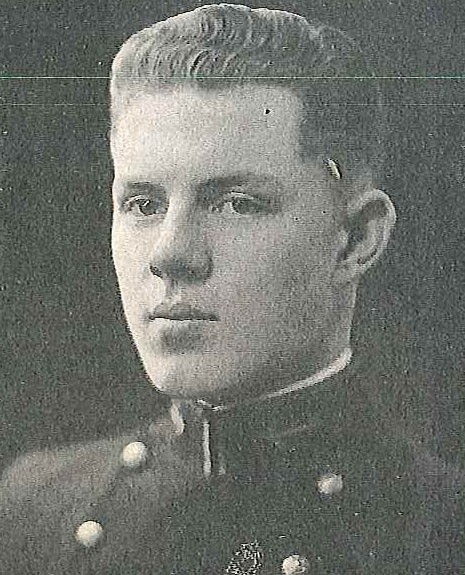 Erasmus Wilson Armentrout, Jr., was born in Rapidan, Virginia, on May 18, 1904, son of Erasmus W. and Ellen (Ashton) Armentrout.  He attended Randolph Macon Academy, Bedford, Virginia, and before his appointment to the US Naval Academy, Annapolis, Maryland, from his native state in 1922, prepared at the Werntz Preparatory School also located in Annapolis. Graduated and commissioned Ensign on June 3, 1926, he subsequently advanced in rank, attaining that of Captain, to date from August 1, 1943.

Following graduation from the Naval Academy in 1926, he had consecutive duty in USS Texas and USS Arkansas successive flagships of the Commander Scouting Fleet.  In the spring of 1928, he transferred to USS Humphreys, also operating with the Scouting Fleet and remained aboard that destroyer until December 1930, when he was ordered to Asiatic Station, for duty in USS Parrott.

Detached from the Parrott in April 1933, he returned to the United States for instruction in general line at the Postgraduate School, Annapolis, Maryland.  Completing the course there in June 1935, he then reported as Anti-Aircraft Control and Division Officer aboard USS Saratoga.  From July 1938 until June 1939, he attended the junior course at the Naval War College, Newport, Rhode Island, after which he had duty as Assistant War Plans Officer in the Sixth Naval District, with headquarters in Charleston, South Carolina.

In June 1940, he joined USS West Virginia as Communications Officer, and in August 1941 transferred to USS Concord as Gunnery Officer.  He was serving in that cruiser upon the United States entry into World War II, December 8, 1941.  In September 1943 he was ordered to cramp Shipbuildig Company, Philadelphia, Pennsylvania to assist in the fitting out of USS Astoria, and reported as Executive Officer of that light cruiser upon her commissioning, May 17, 1944.  “For heroic achievement….(in the latter vessel) during operations against enemy Japanese forces in the Pacific War Area from May 17, 1944 to March 13, 1945….” He was awarded the Bronze Star Medal with Combat “V”.  The citation continues in part:

“….Captain Armentrout rendered invaluable assistance in the organization, administration and operation of his ship, contributing immeasurable to the infliction of damage upon the enemy.  As evaluator in the combat information center, he performed his duties with intelligence and skill during numerous air attacks and shore bombardments of enemy territory…”

Detached from the Astoria in March 1945, he returned to duty ashore, serving as Professor of Naval Science at the University of Oklahoma at Norman until June 1948, when he assumed command of USS Cavalier.  Between July 1949 and May 1952,  he was in command of the Naval Ammunition Depot, Hastings, Nebraska, and in June of the same year became Commander Destroyer Squadron SEVENTEEN.