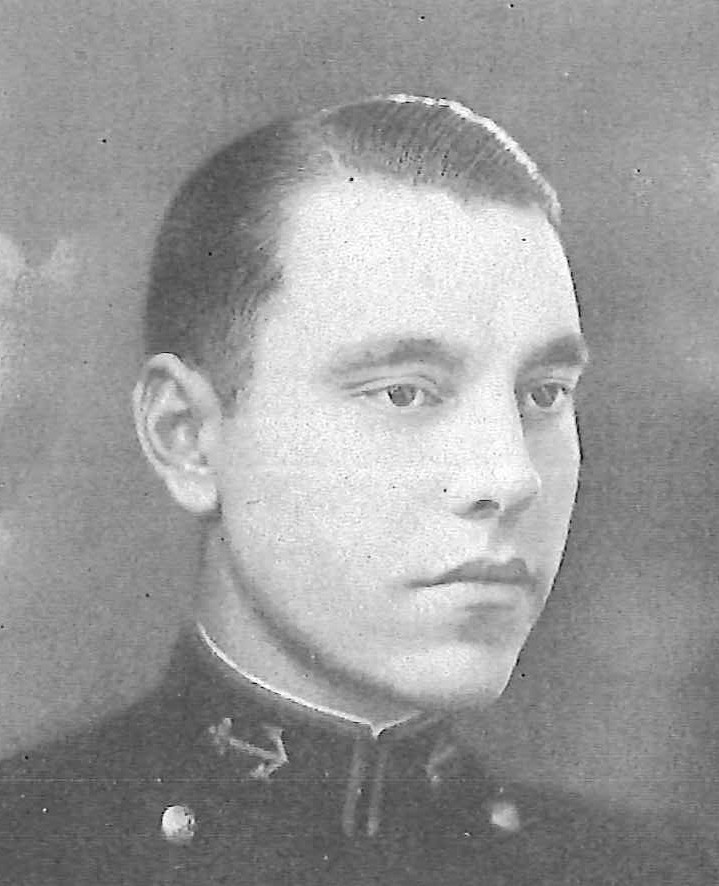 Ralph Sperry Clarke was born on July 10, 1903, in Watertown, New York, son of Fred L. and Fredonia (Webb) Clarke. He attended public schools in Watertown, and Werntz Preparatory School, Annapolis, Maryland, before receiving an appointment to the US Naval Academy in 1922. As a Midshipman he participated in athletics, including Class football, swimming, and Varsity lacrosse. Graduated and commissioned Ensign in June 3, 1926, he subsequently attained the rank of Captain to date from August 1, 1943. His selection for the rank of Rear Admiral was approved by the President on July 14, 1953, to date from June 1, 1954.

Assigned to the USS Pennsylvania upon graduation from the Naval Academy, he served in the Gunnery Department of the battleship from June 1, 1926 to June 1928. Reporting for instruction at the Naval Air Station, Pensacola, Florida, he completed flight training and was designated Naval Aviator on June 10, 129. From September 1929 to June 1932, he served with Scouting Squadron 9, based on the cruiser Salt Lake City. After a two year tour of duty as Instructor at the Naval Air Station, Pensacola, Florida, he reported aboard the USS Lexington in June 1934, and served a year each as a pilot of Fighting Squadron 5, and as Landing Signal Officer of that carrier.

He next had a tour of shore duty as Officer in Charge of the Ships Experimental Unit of the Naval Aircraft Factory, Philadelphia, Pennsylvania. When detached in June 1939 he was assigned to Patrol Squadron 51, later redesignated Patrol Squadron 71, and had successive duty as Flight Officer and Executive Officer, while that squadron operated on Neutrality Patrol in the Caribbean Area, and in the Newfoundland-Greenland Area in the North Atlantic. In October 1941 he assumed command of Patrol Squadron 83, and participated in the anti-submarine warfare “Battle of the Atlantic,” in the Brazilian area.

During the period September 1942 to December 1943, he was on duty as Executive Officer of the Naval Air Station, Anacostia, DC Ordered to the Pacific Fleet, he served from January to November 1944 as Executive Officer of the USS Hancock. That carrier participated in the first Formosan raids, as well as the second Battle of Philippine Sea, and was awarded the Navy Unit Commendation covering the period of his service aboard. He assumed command of the USS Petrof Bay, carrier escort, in December 1944. That vessel received the Presidential Unit Citation, and he was personally awarded the Legion of Merit and the Bronze Star Medal, each with Combat “V” The citation follow in part:

Presidential Unit Citation- USS Petrof Bay: “For extraordinary heroism in action against enemy Japanese forces in the air, ashore and afloat. In action for 133 days, the USS Petrof Bay and her attached air squadrons participated in the major campaigns conducted during this period as one of the southern carrier group which received the brunt of Japanese land-based plane attacks in the historic Battle for Leyte Gulf, the Petrof Bay fought her guns fiercely against enemy dive bomber and suicide planes…daringly launched her fighter and her torpedo planes to strafe and bomb Japanese Fleet units with damage results to these vital combatant ships…caused serious losses to the enemy….”

Legion of Merit: “For exceptionally meritorious conduct… as Commanding Officer of the USS Petrof Bay during operations… at Lingayen and at Zambales, Philippine Islands, from January 1 to February 5, 1945. During the Lingayen campaign, Captain Clarke ably directed the Petrof Bay in proving conditions and effective air cover for convoys carrying our amphibious forces and supplying our troops on shore… (and) throughout the Zambales operations, he contributed materially to…the early conclusion of hostilities in that area…”

Bronze Star Medal: “For meritorious achievement in aerial flight as Commanding Officer of the USS Petrof Bay during operations at Okinawa and adjacent island from March 26 to April 26, 1945. A resourceful leader, Captain Clarke met the exacting demands made on his carrier by maintaining the activities of his ship and aircraft in a high state of combat readiness during a period of heavy aerial operational schedules and enemy air raids.

At end of hostilities, he became Chief of Staff and Aide to Commander Carrier Division Five, serving in that capacity from August to November 1945. Early in 1946 he had temporary duty at various places while attached to the Office of Naval Operations, Navy Department, and in March assumed command of the Naval Air Station, Alamitcs, California. Detached in July 1948, he attended the command and staff curse at the National War College, Washington, DC, and in June of the next year, was again ordered to the Navy Department, this time for duty as Administrative Aide to the Vice Chief of Naval Operations.

Under orders of March 1950 he served as Assistant US Naval Attaché and Assistant Naval Attaché for Air, American Embassy, London, England. In August 1952 he assumed command of the USS Wasp (CV 18), and in September of the next year, became Commanding Officer of the Naval Air Station, Kwajalein, Marshall Islands. He was in command of Fleet Air, Hawaii, from June until January 1955 when he reported as Commander Carrier Division Eighteen.

On March 12, 1956 he became Chief of Naval Air Advanced Training, with headquarters at the Naval Air Station, Corpus Christi, Texas, where he remained until April 1958. He was in command of Carrier Division Five from April 1958 until May 1959 when he reported as Deputy Commander Naval Striking and Support Forces, Southern Europe. “For exceptionally meritorious conduct…from April 1959 to May 1961 …” he was awarded a Gold Star in lieu of the Second Legion of Merit. The citation further states in part:

“Exercising marked professional ability and resourcefulness, Rear Admiral Clarke has made a significant contribution toward insuring the combat readiness of the Naval Striking Forces Southern Europe (United States Sixth Fleet). Through his keen understanding of complex international problems, his resourcefulness in finding solutions to those problems, and his tact and diplomacy in dealing with officers of other North Atlantic Treaty Organizations, he has not only furthered the cause of the United States in this time of great international stress, but also has done much to strengthen the ties f allies in the Southern Region of Europe…”

On July 1, 1961 he was transferred to the Retired List of the US Navy.