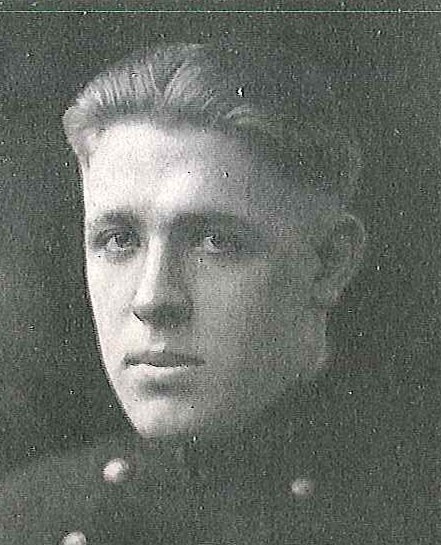 Rae Emmett Arison was born in Niagara Falls, New York, on September 23, 1900, a son of the late Edgar Emmett Arison and Marie Rae Arison.  He attended Nicholas Senn High School in Chicago, Illinois, before being appointed in 1920 to the United States Naval Academy, Annapolis, Maryland, from Illinois.  As a Midshipman, he won his letters in swimming, and participated in other athletics.  Graduated and commissioned Ensign on June 5, 1924, he advanced progressively in grade to the rank of Captain to date from July 10, 1943.

After his graduation in 1924, he served consecutively in USS Florida, six months, and USS Cincinnati two years, and in December 1926, he was ordered to the Submarine School, Ne London, Connecticut, for instruction.  After being detached in June 1927, he had duty successively in the USS S-9 and USS O-8, and qualified for command of submarines.  In June 1931, he reported to the Naval Academy for duty as an Instructor in the Department of Mathematics, with additional duty in the Executive Department.  Detached in July 1934, he assumed command of the USS S-26, based at Pearl Harbor, TH., and served for three years.  Following a second tour of duty as Instructor in Mathematics at the Naval Academy, in June 1939, he reported to USS Balch for duty as Executive Officer.

In July 1940, reporting at Philadelphia, Pennsylvania, he assumed duty as Prospective Commanding Officer of USS Conner and Destroyer Division 78, then fitting out for duty on the neutrality patrol in the Atlantic.  He was detached the following September, before that ship was commissioned, and transferred to USS Robinson as her Commanding Officer, and as Commander, Destroyer Squadron 39.  At this time the President directed the transfer of 50 destroyers to Great Britain, and he was designated Officer in Charge and prepared for turning over 30 of the destroyers so transferred, and in the Robinson made delivery of the last ten at Halifax, Nova Scotia.  For this service, he received a Letter of Appreciation from the Prime Minister of Canada.

In December 1940, he assumed command of the USS Noa, which was especially fitted with plane launching and recovery gear.  He conducted experiments as to the practicability of using planes on destroyers for patrol and escort duty, until relieved of that command in October 1941.  He joined the cruiser, USS Nashville for duty as Navigator, and was at Bermuda on December 1941 when the United States entered the World War.  Following patrol duty in the Atlantic and escort of a troop convoy to Iceland, in March 1942, the Nashville accompanied the carrier Hornet on the first raid upon Tokyo (Doolittle’s air raid o Tokyo, April 18, 1942).    The Nashville sank five patrol boats on the morning of the take-off, and was the only vessel on that occasion to fire her main battery at enemy surface craft.

Detached from the Nashville, he was hospitalized in Pearl Harbor and later had temporary duty at the Receiving Station there, as Officer in Charge of incoming merchant ships.  In July 1942, he reported to USS San Francisco as Navigator, serving in the first amphibious attack of Guadalcanal.  The San Francisco operated as a carrier escort cruiser until the Wasp was lost on September 15, 1942, and then became flagship of Commander, Cruisers, in the South Pacific.

He was awarded the Gold Star in lieu of a fourth Bronze Star medal with combat distinguishing device, “For heroic service as Navigating Officer of the USS San Francisco, Flagship of a Group of Cruisers and Distroyers,[sic]  in action during the Battle of Cape Esperance, Guadalaanal,[sic]  on October 11 and 12 1942.  With dead reckoning tracer rendered inoperative and with our force making radical changes of course and speed through the darkness in a restricted area, )he) furnished accurate information as to the location of our ships and of safe courses to be steered, thereby contributing materially to the success of the Task Group in decisively defeating a large Japanese Force…”

On the night of November 12-13, 1942, he was severely wounded when the San Francisco engaged a strong enemy force in the Third Battle of Savo Island.  In this action, he became Senior Officer aboard when his seniors were killed and he was wounded.  He was awarded the Navy Cross, and is entitled to the ribbon for and facsimile of the Presidential Unit Citation awarded the San Francisco.  The citation in part follow:

Navy Cross:  “For extraordinary heroism…during the Battle of Guadalcanal in the Solomon Islands Area, November 13, 1942... While under attack by a formidable enemy Task Group, Captain (then Commander/ Arison assumed command when his commanding officer was mortally wounded and the executive officer killed, and boldly directed the officers and men in carrying on the battle against overhelming odds.  Although blown over the side of the navigation bridge by a shell explosion, he courageously attempted to return to his station despite severe injuries…”

Presidential Unit Citation—San Francisco:  “For outstanding performance in action against enemy Japanese forces off Savo Island…Although heavily damaged by fifteen major caliber hits she lived to fight again, her survival a distinctive tribute to the valorous spirit of her officers and men.”

Returning to duty after a period of hospitalization, he reported in October 1943, to Renssaelaer Polytechnic Institute, Troy, New York, to serve as Administrative Officer of the V-12 program.  Later that month transferring to the Marine Corps Staff and Command School, Quantico, Virginia, to serve as Chief of the Naval Section, and Instructor in Amphibious Warfare.  Between April and August 1944, he was on tour as a speaker for the Industrial Relations Division of the Navy Department, visiting industrial plants in the Ninth Naval District.

In August 1944, he was ordered to command of LCS (L) (3) Flotilla ONE then fitting out at San Diego, departing in October for Hollandia, New Guinea.  On January 1, 1945, he assumed additional duty in command of all close-in fire support craft and underwater demolition teams, Seventh Fleet.  As Commander of a Task Unit he as awarded a Gold Star in lieu of the third Bronze Star Medal with Combat V, and was cited “For heroic achievement.”  The citation continues:  “Skillfully directing the ships under his command, (he) led the close support units in the initial assault on Grande Island in Subic Bay, and at Mariveles Harbor and Corregidor.  Although the”- enemy positions were strongly defended, he contributed materially to the success of our invasion forces in carrying out the landings with few casualties…”

On February 26 1945, with LCI(L) 778 as his flagship, he escorted the first Navy minesweeper into Manila Bay, and conducted an exploratory sweep off Cavite and Manila.  During this operation they were attacked by Japanese suicide swimmers in the vicinity of Manila Harbor.  He was awarded the Bronze Star Medal with Combat V, “For heroic service…in action against enemy Japanese-held Zamboango Peninsula, Mindanao, Philippine Islands, in March 1945…Proceeding ahead of the landing craft on the morning on March 10, his ships provided a close-range pre-landing barrage and acted as a guide to the landing of first wave troops…Later, on March 16, the subsidiary landing of troops on nearby Basilan Island was effected under his accurate fire support…”

On April 17, 1945 his unit supported landings at Polloc Harbor, Mindanao.  A unit of his support craft was ordered to advanced up the Parang River in support of the Army movements.  They had moved up on a flood and when the flood receded they were marooned by shoals some 65 miles from the sea.  On May 1, 1945, he was directed to bring the four vessels out.  This operation was successfully accomplished, and for his services, he received a Letter of Commendation with Ribbon.

Assuming command of the Davao Gulf Naval Defense Group on May 10, 1945, he then conducted reconnoitering patrols in support of the Army and Filipino forces; located and destroyed, with support of Air Force units from Zamboanga, a large enemy PT boat base, eight PTs, a fuel dump and an ammunition dump; and forced enemy evacuation of Augustino Point by a dawn attack on a radio station, observation station, and fuel dump in that area, followed the next month by minesweeping operations, beach and hydrographic reconnaissance in the preparation for the main landings in Borneo.  He was awarded the Gold Star in lieu of a second Bronze Star Medal with Combat V, “For meritorious service…during operations against enemy Japanese forces in the amphibious landings at Brunei Bay, Borneo, from June 7 to 10 1945…”

Arriving at Jinsen Korea, on September 12, 1945, he assumed duty as Senior Officer present Ashore under Commander North China Area.  Continuing in command of LCS(L) Flotilla ONE, in October 1945, he went up the Hai Ho River to Tientsin to arrange for the arrival of Marine occupying forces, the first United States vessel to dock there in ten years.  He conducted patrols off the southern coast of Korea, and made an outstanding capture in stopping of a small motorboat which had on board a large quantity of silk and linen fabric, tobacco and other contraband merchanidise.

Leaving Korea in December, he arrived at San Francisco, California, decommissioning the Flotilla, and the following April, he reported for duty as Sub Group Commander, Charleston Group, Atlantic Reserve Fleet.  Four months later he assumed command of the USS Arcadia there.  Relieved of command of that tender in March 1947, he had duty as Commander Sub Group ONE, Charleston Group.  On January 3, 1949, he assumed command of the USS Toledo, and the following December, he was ordered to Washington, DC for duty on the Staff of the Joint Chiefs of Staff.  In May 1951, he was relieved of that assignment and reported to the Commandant, Sixth Naval District in Charleston, for duty as Planning and War Plans Officer on his staff.