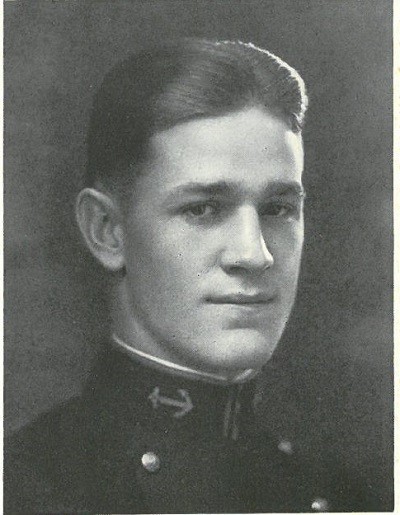 Rufus Calhoun Young was born on 13 August 1900, in Lawrence, Kansas, the son of Rufus C. Young and Mrs. (Ada Bouldin) Young.  He attended Reed College, Portland, Oregon, before his appointment to the US Naval Academy at Annapolis, Maryland, from the Third Oregon District in 1920.  Graduated and commissioned Ensign on 5 June 1924, he advanced progressively in grade to that of Captain to date from 1 June 1943.

Following graduation from the Academy in 1924, he served in the USS New Mexico before reporting in February 1926, to the Naval Air Station, Pensacola, Florida, for flight training.  Designated Naval Aviator, he remained at Pensacola until January 1927, after which he was assigned to Utility Squadron ONE, Aircraft Squadrons, Battle Fleet. Between March 1928 and January 1930 he served with Observation Squadron FOUR-B, Aircraft Squadron, Battle Fleet, attached to the USS Omaha (redesignated Scouting Squadron FOUR-B).  Thereafter until July 1931 he was assigned duty with Patrol Squadron TWO-S, based on the Fleet Air Base, Coco Solo, Canal Zone.  He was attached to Fighter Squadron ONE-B, Aircraft Battle Force for two years and in June 1934, transferred to Bombing Squadron FIVE-B based aboard the USS Ranger.

In June 1935 he returned to the United States, for duty as Inspector of Naval Aircraft, New York, New York, and remained in that assignment until May 1937, when he joined Torpedo Squadron EIGHT-B, aboard the USS Essex. The designation was changed in July 1937, to Torpedo Squadron SIX.  He continued duty with that unit (transferred in September 1937 to the USS Yorktown and later back to the Enterprise) UNTIL May 1938.  He was assigned to Observation Squadron TWO aboard the USS Tennessee the following month, and in May 1939 assumed command of that Squadron. While attached to the Tennessee, the aviation unit of which he was Senior Aviator won the Moffett Trophy for the fiscal year 1939 - awarded annually to the battleship or cruiser based aviation unit conducting its operations throughout the year with maximum of safety.

Between July 1940 and September 1942 he served as Commanding Officer of the Naval Reserve Aviation Base, Grosse Isle, Michigan, after which he assumed command of the USS Biscayne, commanding her in the Sicilian operations during July 1943.  He is entitled to the ribbon for and facsimile of the Navy Unit Commendation awarded the officers and men of that vessel.  The commendation states in part as follows:  “….Operating in actual contact with the enemy and under numerous attacks, the USS BISCAYNE provided communications and other services as flagship and in addition contributed to the defense of other units by the superb performance of her limited battery against enemy planes in air attacks….”

Relieved of command of the Biscayne in August 1943, he reported as Commanding Officer of the Naval Air Station, Bermuda, British West Indies.  In January 1944, he assumed command of the USS Card, and upon his return to the United States in March 1945, became Commanding Officer of the Naval Air Station, Norman, Oklahoma.  During April and May 1946 he had temporary duty in the Office of Research and Inventions, Navy Department, Washington, DC, after which he had duty in connection with the establishment of the Branch Office of the Office of Naval Research and Inventions at Chicago, Illinois.  It was established in October 1946 and he assumed the duties of Officer in Charge.

In March 1948 he joined the staff of Commander, Carrier Division SIX as Chief of Staff and Aide, and in January 1944, he assumed command of the Boston Group, Atlantic Reserve Fleet, with additional duty as Commander, Sub Group ONE, Boston Group.