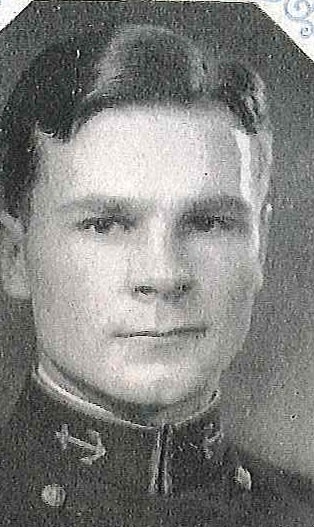 Born in Craig, Missouri, John Allison Fitzgerald attended high school in Oxnard, California and in 1927 was appointed to the Naval Academy, where, in addition to his academic studies, was a member of the boxing team for four years. Graduated on June 4, 1931, he was assigned to the battleship Texas for three years and in 1934 had submarine training at New London, Connecticut.

He was Assistant Boxing Coach at the Naval Academy from December 1934 until March 1935 after which he had consecutive duty in the submarine S-32 and R-11. During 1938 and 1939 he attended the Postgraduate School, Annapolis, Maryland and after duty in that destroyer Yarnall was Executive Officer of the destroyer DuPont, 1939-1940. He was Executive Officer of USS Gar, when the United States entered World War II and subsequently participated in three was patrols in that submarine. He was awarded the Silver Star Medal for conspicuous gallantry during the First War Patrol of the Gar.

In December 1942 he assumed command of USS Grenadier which under his command, made two war patrols. During his second patrol, as Commanding Officer and while attempting to gain position for an attack upon a convoy, the Grenadier has hit, while submerged, by a half ton bomb from a Japanese heavy bomber. After twenty-five hours attempting unsuccessfully to effect repairs, and being confronted by approaching patrol vessels and an armed merchant ship, her Commanding Officer gave the “abandon ship” order. All ballant tank vents and hatches were opened in order to expedite sinking of the submarine. The survivors, including Captain Fitzgerald, were picked up by a Japanese Navy auxiliary vessel and made prisoner of war. For outstanding services while Commanding Officer of the Grenadier was awarded the Navy Cross and a Letter of Commendation with Ribbon and Combat “V”.

Liberated in September 1945, he returned to the United States and during 1946 was a member of the War Crimes Commission. He subsequently served as Operations Officer for task Group 17.9 and Submarine Squadron 3, and was in command of Submarine Division 32. In September 1948 he reported as Executive Officer of the Naval Station, Key West, Florida, and in April 1951 assumed command of the oiler Pawcatuck.

He had duty as Chief of the Operational Shore Establishment and Training Unit at the Joint American Military Mission for Aid to Turkey at Ankara from September 1952 until October 1954, followed by assignment as Director of the Military Services Division, Office of Naval Research, Navy Department. In July 1957 he was designated Chief of Joint Plans, Program Section, Military Assistance Advisory Group, Spain, at Madrid.

Citations (listed by date of action)

Silver Star Medal: “For conspicuous gallantry and intrepidity as Assistant Approach Officer of the USS Gar during her First War Patrol against enemy forces in Japanese-controlled waters from February 2 to March 28, 1942. Displaying excellent judgment and thorough knowledge of attack procedures, Commander Fitzgerald rendered invaluable assistance to his commanding officer in conducting successful attacks which resulted in the sinking of more than 10,00 tons of enemy shipping…”

Letter of Commendation (Ribbon):  “For meritorious conduct in action as Commanding Officer of the USS Grenadier during the Fifth War Patrol of that vessel from 1 January 1943 to 20 February 1943. With great daring and heroic actions the Commanding Officer launched well-planned gun and torpedo attacks which resulted in the sinking and damaging of five enemy vessels, totaling 15,310 tons. He skillfully evaded enemy counter-measures, and brought his ship safety back to port….”

Navy Cross: “For extraordinary heroism as Commanding Officer of the USS Grenadier during her Sixth War Patrol in enemy Japanese-controlled waters from April 21 to 23, 1943; and as a Prisoner- of -War in a Japanese Military Prison from April 23, 1943, to September 2, 1945. When an enemy plane bombed his submarine, Commander Fitzgerald fought courageously for twenty-two hours to save his fatally damaged ship. Skillfully countering renewed enemy attacks, he mustered all remaining fire power for the probable destruction of a hostile aircraft before Japanese surface forces moved in for the kill. Coolly mustering the entire crew, he sent them over the side as the Grenadier was scuttled. Unflinchingly withstanding the cruelties of his capters in various Japanese prison camps for two years and five months thereafter, he inspired his gallant crew to endure the rigors of their lot…”