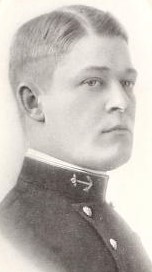 Rear Admiral Clarke, born in Eagle Grove, Iowa, May 15, 1892, attended high school in Eagle Grove before his appointment to the US Naval Academy from the Third District of Iowa in 1911. Graduated and commissioned Ensign in June 1915, he subsequently progressed in grade to the rank of Captain on July 1, 1941. He was promoted to Commodore for temporary service on April 3, 1945, and served in that rank until August 6, 1946, when he reverted to Captain. He was transferred to the Retired List of the US Navy on December 1, 1947, in the rank of Rear Admiral.

After graduation in 1915, Rear Admiral Clarke served consecutively in the USS Jupiter, the USS New Jersey, the USS Minnesota, and USS Connecticut, serving in the latter battleship when the United States entered the World War in April 1917. In May of that year he was assigned duty as assistant communications officer on the staff of the Commander in Chief, Atlantic Fleet, USS Pennsylvania, flagship, and in November was transferred to duty as aide on the staff of the Acting Commander in Chief, Western Atlantic, aboard the USS New Mexico. In December 1919, he rejoined the Pennsylvania as aide Atlantic Fleet, serving in that assignment until July 1919. Following consecutive duty in the battleship New York and Idaho until the summer of 1922, he served as Regimental Officer at the Naval Academy, Annapolis, Maryland, for two years.

In July 1924, Rear Admiral Clarke joined the USS Brooks, serving as her executive officer until the following September when he was transferred to duty as aide and flag secretary on the staff of the Commander, Battleship Division Four, Battle Fleet, USS New Mexico, flagship. He continued in that duty until detached in November 1925 and reported as executive officer of the USS Mc Cawley, serving in that capacity until June 1927, when he returned to the Naval Academy where he was on duty for three years, first as aide to the Superintendent, and later as an instructor in the Department of Navigation.

Rear Admiral was gunnery officer of the USS Concord from June 1930 until June 1933, when he again returned to the Naval Academy to serve as instructor in the Department of Seamanship and Navigation for three years. In August 1936 he was assigned duty in charge of fitting out the USS Selfridge, and commanded that destroyer from her commissioning, November 5, 1936, until June 1938. Completing the senior course at the Naval War College, Newport, Rhode Island, in May 1939, he served on the staff of that College until the following September.

Rear Admiral Clarke was next assigned duty in connection with fitting out destroyer Division Eighty Three in the Eleventh Naval District, San Diego, California. He was Commander, Destroyer Squadron Eighty Three, with additional duty in command of the USS Lawrence, from September 1939 until May 1940 when he was transferred to duty as Commander, Destroyer Division Sixteen, USS Mayrant, flagship. Detached from that command in May 1941, he returned to the United States.

Following service as head of the Department of Ordnance and Gunnery at the Naval Academy from May 1941 until February 1943, Rear Admiral Clarke returned to sea as commanding officer of the USS Idaho, and served in that command until August 2, 1944. During that period, the Idaho took part in the Aleutian Islands Campaign from April to November 1943, at which time she sailed for the Central Pacific Areas as a part of a task force under the command of Admiral (then Vice Admiral) Raymond A. Spruance, USN. There she participated in operations against the Gilbert and Marshall Islands. For his service as Commanding Officer of the Idaho from February 14, 1943 until August 2, 1944, he was awarded the Legion of Merit with the following citation:

“For meritorious conduct in the performance of outstanding service to the Government of the United States as Commanding Officer of USS Idaho during action against enemy Japanese forces in the Bismarck Archipelago and the Aleutian, Marshall, Gilbert and Marianas Islands, from February 14, 1943 to August 2, 1944. Displaying exceptional initiative, judgment and professional ability, Commodore (then Captain) Clarke expertly maintained his ship at the peak of efficiency throughout almost continuous offensive action against many heavily fortified enemy-held islands in this vital war area and, by his superb ship-handling and brilliant leadership, contributed materially to the successful operation of the Idaho in the occupation at Attu and during the bombardment of Kiska, Makin, Kwajalein, Wotjo, Kavieng, Saipan and Guam. His aggressive determination and constant devotion to duty in the face of tremendous odds were essential factors in the success of our sustained drive against the enemy in the Pacific and reflect the highest credit upon Commodore Clarke, his gallant officers and men and the United States Naval Service.”

Upon detachment from command of the Idaho in August 1933, Rear Admiral Clarke returned to the United States where he served from September 1944 until January 1945, as Assistant Chief of Staff, Headquarters, Twelfth Naval District, San Francisco, California. On February 1, 1945, in the rank of Commodore, he became Commander, Naval Training Station, Naval Operations Base, Norfolk, Virginia, with additional duty in connection with the coordination of training. He was awarded a Gold Star in lieu of a Second Legion of Merit for services from February 1945 until January 1946, as Commanding Officer of the Precommissioning Training Center, Norfolk, Virginia.

Rear Admiral Clarke reverted to the rank of Captain on August 6, 1947, when he reported for duty as Commanding Officer of the Naval Ammunition Depot, St. Julien’s Creek, Virginia. On September 22, 1947, he was ordered relieved of all active duty pending retirement and was transferred to the Retired List of the U.S. Navy on December 1, 1947, and promoted to the rank of Rear Admiral.